On April 28, 2018, the Philadelphia Fusion played a match against the winless Shanghai Dragons. After securing a teamfight win, Jae-hyeok “Carpe” Lee repeatedly crouched on top of Shanghai’s Gihyeon “Ado” Chon. It’s a familiar taunt for anyone in esports or gaming, widely known as “teabagging” — a common in-game emote meant to mimic dipping a scrotum on an opponent. The crowd at the Blizzard Arena responded with an emphatic boo.

The teabagging incident ignited a controversy and a conversation among Overwatch fans. Other games tend to accept teabagging; it’s a playful way to show dominance over an opponent. But the Overwatch League’s standards aren’t in line with other esports titles, and Overwatch itself isn’t like other competitive shooters. Both the game and the league itself is split between two fanbases: newcomers to esports who have embraced the diverse, optimistic world of Overwatch, and entrenched esports fans who bring the culture of other titles with them.

Blizzard is doing its best to try not to take sides, but by being too neutral, it might lose both bases.

The fissure between Overwatch’s fanbases have been present from the beginning. The game rewards more than just mechanical aim; heroes like Mercy and Orisa focus on ability usage and cooldown management. Overwatch was a shooter for players without elite aim, and that emphasis clashed with players who brought expectations of what a shooter should be.

“The game was released on my birthday, and I had played other Blizzard games, so I thought I’d give it a shot.” Tyler Colp, a writer and reporter for BlizzardWatch says. Over the phone, Colp says Overwatch was the first FPS he played seriously. Colp admired Overwatch’s atypical character design. “Maybe this game is something I can be good at without shooting,” Colp said.

For fans like Colp, Blizzard’s patch strategy has been frustrating. Many changes cater towards the higher end of the ladder and competitive play. Heroes like Widowmaker and Soldier 76 still functionally play the way they did at launch, but heroes like Torbjorn, Symmetra, and Mercy have been radically changed in ways that diminish their accessibility.

Mercy is a key example of this frustration. Mercy’s a unique hero in that she rarely shoots, and her power largely comes from her high-impact ultimate. She is loathed by top players, but boasts one of the highest pick rates of any hero in the game. She’s been changed multiple times, largely through nerfs, and she has lost her original mass-resurrection ultimate. Nonetheless, players refuse to give up on the hero that shepherded them into the FPS space.

Mercy’s original ultimate design was a masterstroke in allowing players to rely on positioning, game sense and savvy ability usage to be successful. Mercy opened the door for players with fine motor issues, or other disabilities to play instead of stand on the sidelines. Without firing a single shot, a player could have an immense impact on the match. This was a blessing for many players, but it warped high level play around Mercy being able to undo a teamfight and reset the board immediately. Blizzard eventually removed Mercy’s mass rez and replaced it with Valkyrie, a buff that lets Mercy fly and chain her supportive beams.

“I enjoy being rewarded for positioning and decision making more than mechanical aim,” Vale is a full time streamer and consistently high ranked support player. Vale is a FPS veteran, and grew tired of relying on mechanical aim. Instead, Mercy offered value through game sense and awareness.

“People pick heroes for many different reasons. Some people like the gameplay, others like the aesthetics, then there are the meta followers, the people who like to relate to their hero, the lore followers, and more,” says Vale. “I feel like Mercy satisfies a lot of those traits for a lot of people.”

When asked if the changes to Mercy have had a positive or negative impact on the hero, Vale said that the changes Blizzard have made have not been for the better. “I think it has been a rollercoaster going better and worse. Currently I see her as worse in balance and feel.” 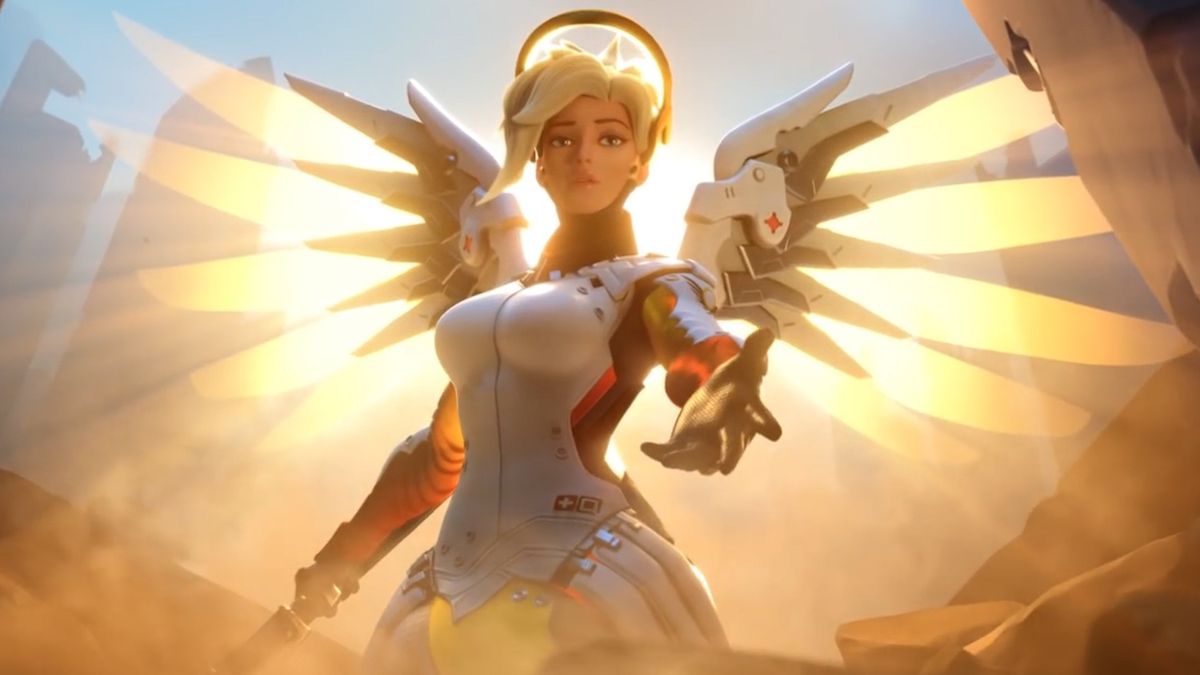 Tensions between Overwatch’s two communities have continued to stew with how Blizzard is handling the Overwatch League. The Overwatch League was pitched as an organized, fair circuit with policies to protect players and engage fans. However, Blizzard has been wrestling with imagery and conduct. Pepe the Frog is a Rorscharch test of an emote; some people see a meme, and other people see a symbol of the alt-right. Blizzard quickly banned the use of Pepes. The same process played out with the “okay” sign, a common gesture that has become increasingly controversial after being associated with the alt-right and flashed in court by the Christchurch shooter.

For those who come from traditional esports scenes, these controversies seem like a vocal minority getting upset over nothing. Teabagging and Pepes are just part of the cultural fabric of the scene. For those who have come to Overwatch as their first esport and are hoping for a scene free of the baggage of other esports, the pervasiveness of these symbols is troubling. They signify a sort of unwritten code of who belongs and who doesn’t. For a game based around a utopia where everyone belongs, the contrast for these fans can be confusing.

Blizzard wants both of these fanbases on their side — especially since they’re relying on geolocation and fan passion to market and promote their league. They want the legitimacy of a real sport, and so are averse to risking an extremist dogwhistle on their broadcast. But they also need the #attitude of other shooter games to ensure there’s a common vocabulary across esports that can bring in fans. Gamer culture relics and squeaky clean professionalism vie for prominence in the broadcasts. Flash sizzle reels and high-pressure Widowmaker headshots play to get fans amped up, while Blizzard encourage fans to cosplay their favorite characters and make custom signs to wholesomely support their favorite players.

Wanting it both ways will only cause further tensions among players. Who is Overwatch for? This question hasn’t been answered, and any possibilities keep morphing with patches and controversies over time. The future of the Overwatch League seems unclear. Blizzard stands at a crossroads. Which part of the fanbase is Overwatch truly for?