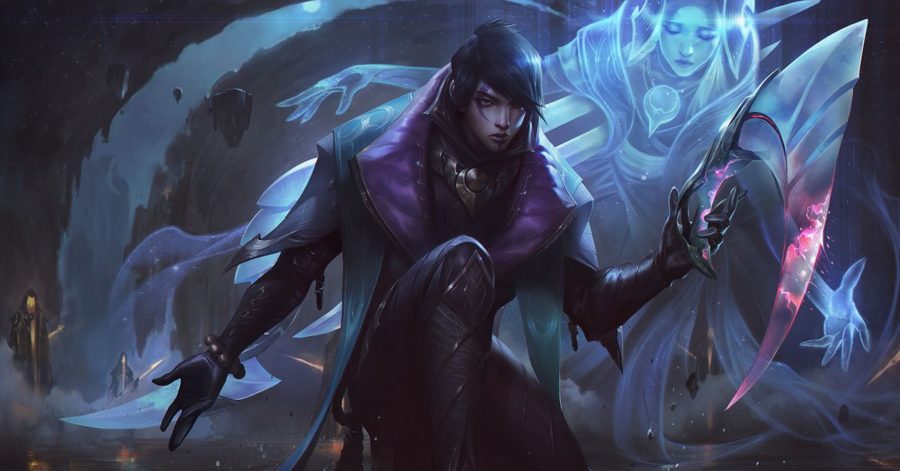 A new moon rises as Aphelios makes his way onto the rift. The Weapon of the Faithful is the newest addition to the League of Legends roster, making him the 147th champion.

He is a marksman who utilizes an arsenal of weapons to outplay and overcome his opponents. Aphelios has been designed to be played as a bot lane carry and I’ll be teaching you everything you need to get started on your journey to mastering him.

Ed. note: League of Legends champions evolve over time, and so this post will, too. This post was last updated for patch 9.24.
Aphelios’ Skills

Passive – The Hitman and the Seer

Aphelios has access to five different weapons, being able to switch between two at a time, one in the main hand and one in the offhand. All of the weapons have their own unique attacks and abilities which consume ammo. Each weapon has a total of 50 ammo. Once you’ve used up all the ammo from one weapon, it will swap to the next one in line.

Q – Weapons of the Faithful

This uses the current main hand weapon’s ability. As you can see, each weapon not only has a different ability, but each ability interactions differently based on your offhand weapon (minus the gravity gun).

Phase allows you to switch between your main-hand and off-hand weapon. Aphelios’ main combo utilizes the ability to switch between weapons quickly. This is because each weapon’s ability has its own independent cooldown, meaning that it’s possible to use your main hand weapon’s Q and then swap to your offhand to Q again.

Aphelios is the first champion in the history of League of Legends to only have three basic abilities (or, abilities bound to only three keys). This means that Aphelios has no E ability.

Moonlight Vigil’s cast length, projectile speed, and projectile size will always be the same no matter which pair of weapons you currently wield. However, the effect of Moonlight Vigil will change based on your weapons.

As i said, this is a difficult champion to explain in writing, but trust me, it’s a lot less complicated to play than it sounds.

Unlike every other champion, Apehlios doesn’t use his skill points from leveling up on his abilities. He instead uses them to increase his attack damage, attack speed, and bonus armor penetration.

You’ll want to prioritize points into AD as this will help you with CSing and trading in lane. Next you should max out attack speed. Attack speed will help you in teamfights and skirmishes by increasing your overall DPS as well as helping with your waveclear. Leave armor penetration to last as you realistically won’t be up against a ton of armor before late-game.

I recommend running Press The Attack as your Keystone Rune. He’s almost entirely based on auto attacking, but you will have enough attack speed in your items and level-ups to make Lethal Tempo not necessary.

You’ll want Overheal, as it synergises well with Pistols’ overhealing as well as our our next rune in the tree, Legend: Bloodline, for lifesteal. Coup De Grace is the best option in the final slot to help with finishing off those low health targets, but you can trade it out for Cut Down when facing up against multiple tanky targets.

As for secondary tree, I’ve found most success with Inspiration taking Magical Footwear and Biscuit Delivery. This page grants you a ton of sustain during laning phase with the biscuits, and grants you boots for free around the time you’re finishing up your first item. If you want more aggressive secondary runes, try out Sorcery with Absolute Focus and Gathering Storm.

This core build grants you a strong mix of attack damage, crit, and attack speed, everything Aphelios needs to be the hyper-carry he was designed to be. Essence Reaver is a strong first item as it grants not only attack damage and critical strike chance, but also cooldown reduction which is essential in allowing you to somewhat control which weapons you have out at key moments. Lower cooldown on your weapon’s ability means you can use it more often, consuming ammo faster.

Runaan’s Hurricane has some important interactions and goes well with Aphelios’ kit. You will normally be in the thick of the fight as Aphelios, which is where the Runaan’s passive shines. I’ll usually get this after Essence Reaver, but when I don’t need the attack speed or passive as much, I’ll often start building towards Infinity Edge instead and get Runaan’s afterwards.

After that, it’s all situational. Double stacking Zeal items on Aphelios is quite strong, especially since you can make good use of the passive effects and the 100% crit. Phantom Dancer can be a strong choice if you would like to reach 100% crit, but you also need a defensive item to survive in fights for longer. If you feel like you don’t need a defensive item, grab Stormrazor instead. It provides similar stats to Phantom Dancer but has the added AD and slow.

I would also recommend trying out the four Doran’s Blade rush that has been gaining popularity in the higher ranks. This build allows you to power spike hard early on. The stats along with the passive lifesteal granted by stacking Doran’s Blades gives a ton of skirmishing power, which can allow you to take over the lane and makes it very difficult for your opponents to take favourable trades against you. After grabbing all those Doran’s Blades, you should continue your build normally and begin selling the Doran’s off one by one when you need the inventory space.

Aphelios likes being buffed up and peeled for by enchanters as much as he loves playing alongside engage champions. Any of these champions synergise well with Aphelios and will allow him to succeed when played properly.

Aphelios is quite immobile, having zero dashes in his kit and very limited mobility elsewhere, meaning that he is weak against many engage champions that he loves playing alongside. If you want to see the enemy Aphelios suffer, pick some of these champions.

Aphelios is a hyper-carry marksman with the ability to take over the game when played correctly. Aphelios is a high-ceiling champion, like Yasuo or Lee Sin, making it feel very rewarding to spam and even one-trick this champion. Expect to see him in almost every single one of your games for years to come, unless he’s your new permaban of course.