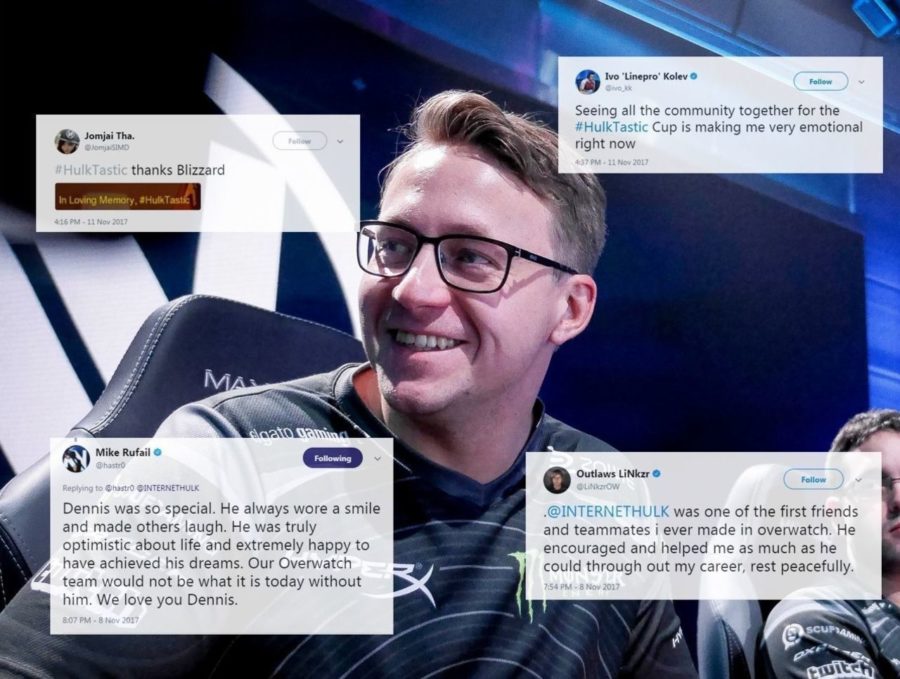 Around the web: Community mourns the death of INTERNETHULK, celebrates his legacy

We all do it — constantly refreshing our Twitter feeds, trying to keep up with the inner workings of the online world, scrolling for that hot take or that juicy trash talk. But let’s be real: you don’t have time to read everything. Don’t worry, we’ve got your back. Every week we’ll be breaking down what you missed on social media this week, from the pop-offs to the pop culture.

When news broke last week of the death of Dennis “INTERNETHULK” Hawelka, it sent the esports community reeling.

It was Team Liquid that first made his passing public via an announcement posted to Twitter. Hawelka last served as Team Liquid’s Overwatch coach, but was transitioning to a role as the organization’s head League of Legends coach ahead of the 2018 season.

Shortly after, heartfelt messages from fans, fellow pros and other community members began to pour in.

I still can’t believe this. Hulk is as old as me. And the lad was strong as fuck. How can something so shit as an infection take him down? The world really isn’t fair.

Hulk has done so much for Overwatch he needs to be remembered.

With his unique talent in spotting rising stars, we will be honouring @INTERNETHULK by renaming our Breakthrough Player of the Year Community Award after him.

Rest in peace @INTERNETHULK . Even those of us that never met you will miss you greatly. pic.twitter.com/qS33krJO8x

.@INTERNETHULK was one of the first friends and teammates i ever made in overwatch. He encouraged and helped me as much as he could through out my career, rest peacefully.

So sad. Tribute to an inspiring community member #HulkTastic pic.twitter.com/9YDNidI4Wi

Dennis was so special. He always wore a smile and made others laugh. He was truly optimistic about life and extremely happy to have achieved his dreams. Our Overwatch team would not be what it is today without him. We love you Dennis.

A charity fundraiser tournament, the HulkTastic Cup, was quickly set up in tribute. The friendly competition was intended to not only honor Hawelka, but raise money for his family through both a GoFundMe campaign and a Matcherino crowdfunding page.

The Overwatch Competitive Community is coming together today to honor and celebrate the life of @INTERNETHULK. #HulkTastic

The tournament raised close to $27,800 as of press time. According to the crowdfunding pages, Hawelka’s family will donate any funds beyond those necessary to “a charity of their choice”.

Today has truly been bittersweet. Thank you so much to everyone who participated and donated. This is why I love the OW community so much. Righto Klaus, you can go back to partying now, you crazy bastard. #HulkTastic

Thanks to everyone who was a part of the #HulkTastic Cup celebration today, whether you played, cast, produced, chatted, watched, or donated.

For those that missed the #HulkTastic stream, Dennis’ family has decided to hold the funeral in his beloved LA. pic.twitter.com/CVRdxHIvUV

Woke up early this morning in Korea to watch the #HulkTastic Cup. Makes me happy to see our community come together like this, in memory of a true hero. We miss you so much @INTERNETHULK ❤️ pic.twitter.com/XJHr1u4DXd

I think we need to thank everyone who donated,arranged,cast,watched, and tweeted #HulkTastic Cup a great dedication tournament to a true coach of the future that we never got thanks to everyone for this great to see a classic overwatch stream surely would have made Hulk happy

All good things must sadly come to an end. That was a wonderful tribute to Dennis. Rest in peace. #HulkTastic