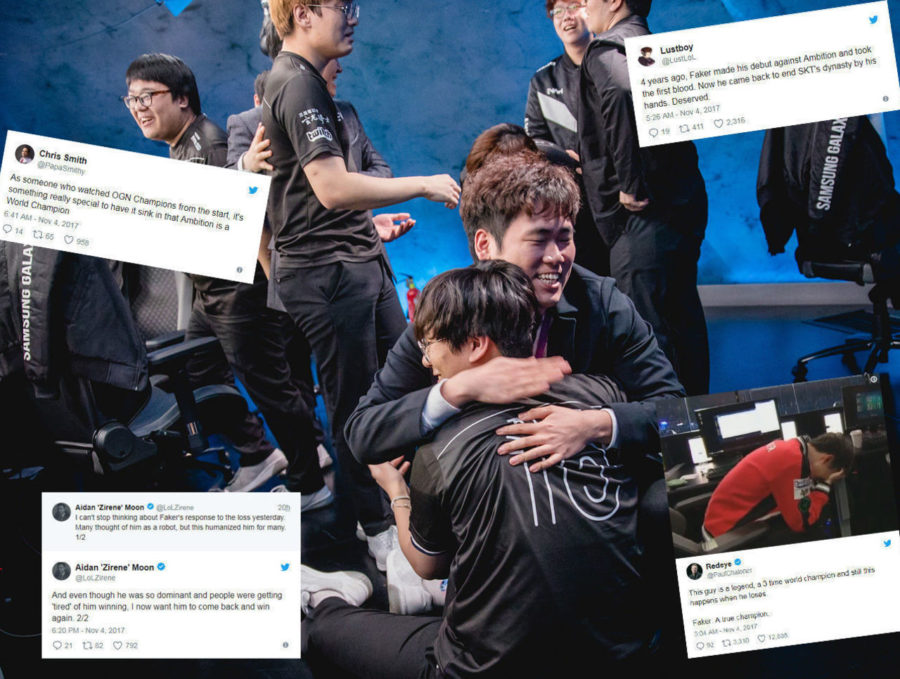 We all do it — constantly refreshing our Twitter feeds, trying to keep up with the inner workings of the online world, scrolling for that hot take or that juicy trash talk. But let’s be real: you don’t have time to read everything. Don’t worry, we’ve got your back. Every week we’ll be breaking down what you missed on social media this week, from the pop-offs to the pop culture.

Samsung ushered in a new age in League of Legends this week, ending SKT’s streak of world titles. And we’re sure this spells big things for the Samsung organization — but the sponsorship their League team may attract are nothing compared to the money Blizzard will likely see through Overwatch League skins.

OK, maybe not. But they are pretty cool.

When Samsung Galaxy defeated SK Telecom T1 in the Worlds finals on Saturday, they made history. Not only did they stop SKT from locking in their third consecutive championship, but they handed the most decorated team in the game’s history their first elimination at a World Championship.

But in the immediate aftermath of Samsung’s win, another narrative sprung into the forefront — SKT’s devastated reaction to the loss.

Burying his head in his hands, Lee “Faker” Sang-hyeok was barely able to console himself enough to shake hands with the Samsung players. And for many, it was proof of Faker’s will to keep winning.

This guy is a legend, a 3 time world champion and still this happens when he loses.

And even though he was so dominant and people were getting ‘tired’ of him winning, I now want him to come back and win again. 2/2

Of course, it wasn’t all about SKT. For Samsung, the win comes as the end of a long and arduous journey beginning the moment the organization rebuilt the team the in the wake of the Korean Exodus. It’s an especially touching story for Kang “Ambition” Chan-yong, who was a part of both the beginning and the end of this chapter in SKT’s history.

4 years ago, Faker made his debut against Ambition and took the first blood. Now he came back to end SKT’s dynasty by his hands. Deserved.

As someone who watched OGN Champions from the start, it’s something really special to have it sink in that Ambition is a World Champion

The Overwatch League revealed its team uniforms on Saturday — and we’re not talking about player jerseys. Blizzard has put together custom skins for each of the game’s characters in team colors with both home and away variants.

Behold the Overwatch League team uniforms! Teams will have in-game versions for home and away games. pic.twitter.com/S7pZVX6CnS

The model follows the uniforms Blizzard unveiled for the Overwatch World Cup at BlizzCon, where different countries were able to rep their colours in and out of game.

Overwatch team uniforms is a BRILLIANT idea. It’s so much easier to watch what is going on. You’ve done well, @PlayOverwatch

Overwatch League Team Uniforms! So cool seeing them all together. Who are you rooting for? https://t.co/DAXY0kyS4d

Though the team skins are not available yet for average players, Blizzard has said previously that players will be able to support their favorite teams with in-game items. So it’s probably a safe bet you too will be able to rock a Shanghai Dragons Mercy skin.

It’s okay, my wallet hurts, too.