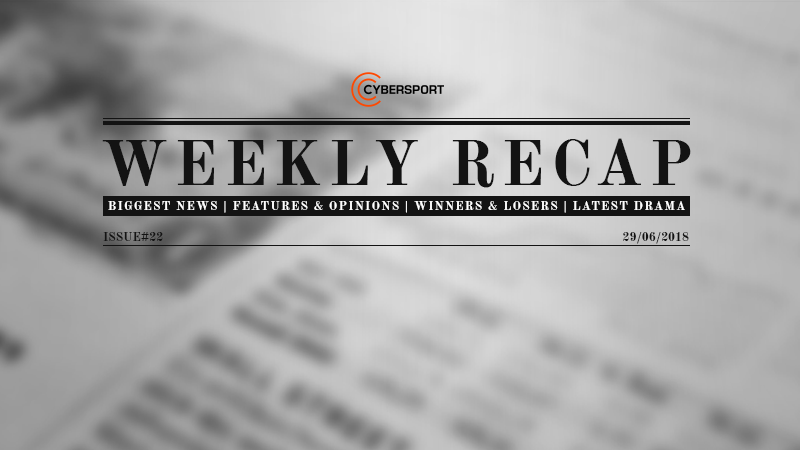 Players are becoming worth more and more these days, with CS:GO buyout figures reportedly in the hundreds of thousands of dollars. Even more money is on the line at TI, and we can finally reveal which teams will be showing up at Dota’s biggest event. Oh, and there’s a hamster. It’s the Weekly Recap!

G2 Esports recently followed through with realising Richard “shox” Papillon‘s dream team, seeing to the addition of tactical masterminds Kévin “Ex6TenZ” Droolans and Edouard “SmithZz” Dubourdeaux. Naturally, this required the team to make roster adjustments, with management opting to move Nathan “NBK” Schmitt and Dan “apEX” Madesclaire into inactivity, though the pair are still tied to the organisation with active contracts.

Many wanted to see the two highly-skilled French players on an international mix, or perhaps a roster that is missing a fifth, something that was rumoured when NBK was alleged to be practicing with Cloud9 with the aim of subsequently joining the roster. This was dispelled some time after, as buyouts were cited as the main issue preventing the former interim in-game leader for G2 from joining the organisation.

Dendi to stand-in for Vega Squadron

Yesterday, Natus Vincere‘s CEO Yevhen Zolotarov hinted that Dendi might not return to the team where he has played his entire Dota 2 career. Another development in that story came to light today, as Vega Squadron‘s lineup for the BTS Summer Cup was revealed — with Danil “Dendi” Ishutin listed as a stand-in.

The tweet sent out was not posted by Vega Squadron, as one might think, but by RuHub, who covers the event.

Overwatch’s newest hero is a furball of death

Overwatch is a game of many heroes. Some are deadly assassins with cynical worldviews, some are robotic creations optimised for battle. This one… is a hamster.

In a tweet shared by the official Overwatch account, the newest hero — Hammond — rolls in, guns blazing, inside a giant spherical machine that is clearly capable of making many people very dead very quickly. When the top hatch opens, the pilot mastermind is revealed to be a whole lot fluffier than expected.

As if the ongoing FIFA World Cup wasn’t enough, next week will see regional rivalries flare up once again with the second edition of Rift Rivals, an international tournament designed to pit the world’s top leagues against their neighbours for the ultimate bragging rights.

Here’s all the info you need to know on the participating teams, times, and tournament locations.

Following the popularity of the inaugural Overwatch League season, fans are already eagerly anticipating this year’s World Cup, which is heading to four corners of the globe in the group stages!

An announcement on the official Overwatch League website revealed the host venues for group stages in advance of the finals at BlizzCon in Nov. 2018. Here’s where the action is headed.

On Jun. 21, popular in-game skin trading website, OPSkins.com, effectively ceased operations on Valve’s Steam platform, as the publisher issued a cease-and-desist on Jun. 8, to be enforced on the 21st.

According to a Reddit post submitted by /u/Artemis, a total of 2884 bots received trade bans, of which 2843 had CS:GO items in their inventory. The toll of the ban amounted to a grand total of $1,966,510.86, with a variety of highly sought-after skins still locked to the aforementioned accounts.