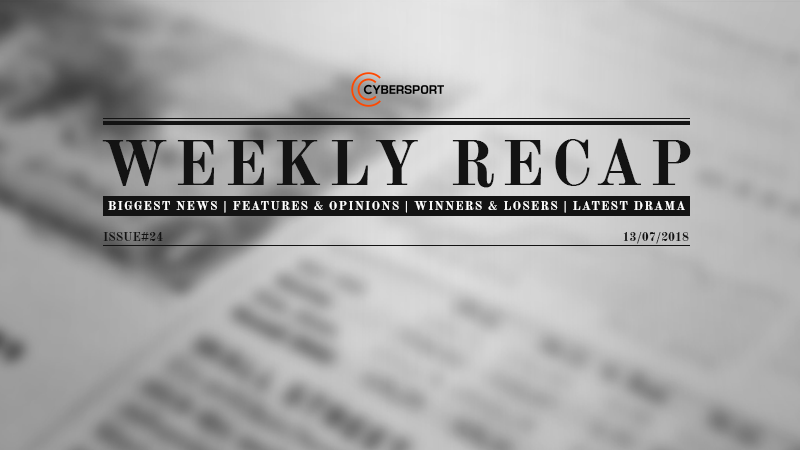 Some big money announcements and Cloud9 were at the centre of multiple headlines this week — that’s what happens when you lose a CS:GO player like Tarik “tarik” Celik, although League fans will be happy to see the return of an AD carry favourite to the starting lineup. It’s the Weekly Recap!

Tarik “tarik” Celik, one of the stars on the Cloud9 lineup who made North American history by winning the first CS:GO Major for the region in January of this year, has now departed the lineup, the organisation confirmed in a video uploaded last night.

The video thanked the US sharpshooter for his many contributions but didn’t mention where he might be headed — although the community thinks that they have it figured out already.

Since the introduction of the Battle Pass — then known as “The Compendium” — at TI3, the prize pool for The International has grown each year. For a while, it didn’t look like this year would surpass that of TI7, but the weekend sale of Battle Pass levels gave the prize pool a healthy boost and made it a competition again.

Then, today, the total prize pool hit $20 million according to the Dota 2 prize pool tracker. It took the community 64 days to reach this milestone, compared to the 58 days it took last year. At this point, the prize pool is roughly $420.000 behind that of last year but don’t give up hope just yet. This year’s Battle Pass was released before that of TI7, so the day-to-day comparison may not be the best indication of where we currently stand.

The limited edition Pink Mercy skin charity campaign was an overwhelming success. During the campaign, Blizzard donated 100% of the skin’s sales to support the Breast Cancer Research Foundation. The skin, designed by community artist Vickisigh, which was available for purchase in May, raised more than $12.7 million, becoming the largest one-year donation in BCRF’s history.

IEM World Championship returns to Katowice as a $1 million Major

Returning to Katowice in 2019, the Intel Extreme Masters World Championship has received Major status from Valve. Featuring 24 teams and $1 million prize pool, the most lucrative IEM event in history will be held on Feb. 14 – Mar. 3 next year.

The IEM World Championship Major event will count towards the Intel Grand Slam: the $1,000,000 award to the first team that wins 4 premier events organised by ESL and/or DreamHack Masters out of 10 events total.

Thanks to a now-closed hole in Valve’s API, very accurate data regarding the total number of almost any Steam game’s players is now available to the public. The numbers, even while having some unclear caveats, truly show just how popular the Steam platform really is.

The new data derivation method (explained by ‘The End Is Nigh’ developer Tyler Glaiel) is based on the percentage of players who have accomplished the Steam Achievements associated with most of the games on this platform.

Cloud9 are fielding yet another roster iteration for week 4 of the North American LCS summer split. Zachary “Sneaky” Scuderi has returned to the starting lineup — in the mid lane — as Nikolaj “Jensen” Jensen takes on the bot lane. Tristan “Zeyzal” Stidam remains on the LCS lineup as his development continues, further asserting the coaching staff’s trust in that process.

The move highlights (or telegraphs) the possibility that Cloud9 may be running funneling strategies with a marksman pick in the mid lane, a matter that would explain the strange swapping of positions between Sneaky and Jensen.

CS:GO
Olofmeister back in action for ELEAGUE Premier 2018
CompLexity and Rogue qualify for FACEIT Major through Americas Minor