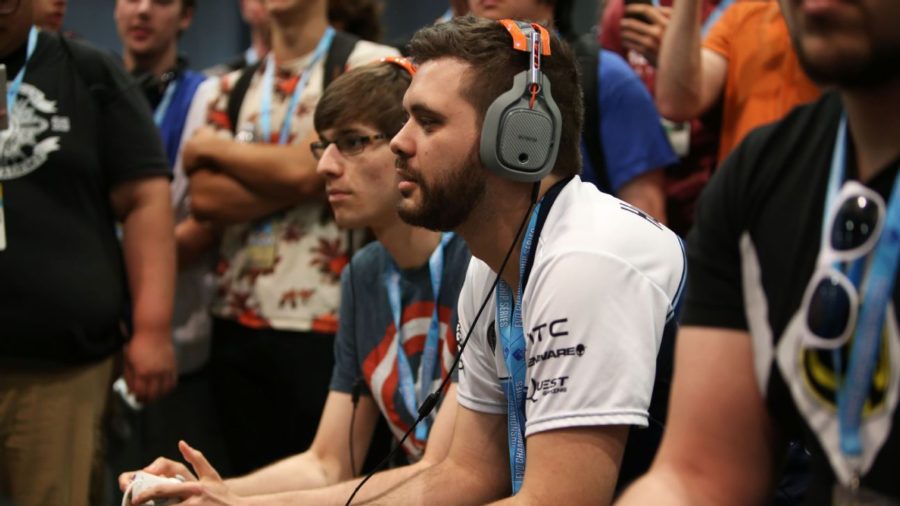 At the end of 2017, Juan “Hungrybox” Debiedma emerged as the world’s best Super Smash Bros. Melee player, an achievement reinforced by his career-high No. 1 ranking on SSBMRank 2017. However, during the first half of this year, the Jigglypuff main won only one major tournament, with the rest of the spring’s majors going to other “gods” of the game such as Jason “Mew2King” Zimmerman and Justin “Plup” McGrath.

Saturday night, Hungrybox’s victory at Community Effort Orlando 2018 signaled a return to the status quo, at least on paper.

From a numerical standpoint, CEO’s Melee bracket went exactly as expected. After all, the tournament’s top finishers placed in the order of their seeding, with Hungrybox defeating Plup in grand finals and Mew2King and Justin “Wizzrobe” Hallett taking the third- and fourth-place positions, respectively. Despite this familiar outcome, however, CEO’s live viewers were treated to quite an unusual display of Melee.

In the first set of grand finals, Plup surprised both Hungrybox and the crowd by switching to Sheik after losing a close first game with Fox. In a tight set, Plup was able to secure the bracket reset, transforming to Zelda and connecting a desperate dash attack to finish off Hungrybox’s final stock in Game 5.

Common knowledge says that Sheik has a heavily disadvantaged matchup against Jigglypuff, and this victory marks Plup’s first victory over Hungrybox with the character since the two met at an Orlando local last February. Unfortunately for Plup, Hungrybox adapted in the second set of grand finals, quickly dispatching his fellow Floridian by a resounding 3-0.

Plup wasn’t the only competitor who surprised the audience with his character choices Saturday. Perhaps due to Mew2King’s lack of sleep leading up to CEO, the New Jersey native played fast and loose, switching to Jigglypuff and nearly winning the ditto against Hungrybox in their winners semifinals set. This choice was undoubtedly a calculated one: At May’s Smash Summit 6, Hungrybox showed his lack of experience in the Jigglypuff matchup when he dropped a game to SSBMRank No. 100 Toussaint “2saint” Turnier.

Mew2King also made an unorthodox character pick in his sets against Wizzrobe, primarily using Marth to defeat the youthful Captain Falcon main. When the two players met at May’s Momocon 2018, Wizzrobe handed Mew2King’s Sheik a ruthless 3-0 defeat, leading many to speculate that he had figured out the SSBMRank No. 4’s weak points. Saturday, Mew2King silenced his doubters, demonstrating that he is more than capable of using the swordsman to defeat any fastfaller.

While Wizzrobe might have been disappointed that he didn’t outperform his seed, the Florida native had the distinction of winning Saturday’s most gripping set, a thrilling five-game slugfest against Zain “Zain” Naghmi. In a repeat of their set at Genesis 5, Wizzrobe squeezed out a close losers quarterfinals victory over the Marth main, snatching victory from the jaws of defeat in both Games 4 and 5 to defeat his fellow up-and-comer. In 2018, Wizzrobe and Zain have developed one of the most stress-inducing — if technically one-sided — rivalries in competitive Melee, with Wizzrobe clutching out Game 5 victories in all three of their meetings this year.

CEO marks the final Melee major with multiple “gods” in attendance before late July’s Evolution Championship Series 2018. Though Hungrybox remains the presumptive world No. 1, the field is arguably more wide open than it has been in years. While the Jigglypuff main seemed all but impervious to challenges from any character beside Fox at the beginning of 2018, he’s dropped sets to players using Fox, Falco, Captain Falcon, Sheik and even Yoshi over the past two months. As the crown jewel of the summer of Smash approaches, the No. 1 spot on SSBMRank 2018 remains within the grasp of anyone in Melee’s top six.