In January 2017, a group of women marched the streets of Seoul, South Korea with a raised banner that had Hana “D.Va” Song’s pink logo on it. Originally a group of feminist gamers who banded together to protest their corrupt government, the members formed the National D.Va Association to fight for a world in which someone like D.Va — a professional gamer who is respected for her skills — can exist without exclusion, discrimination and marginalization.

Much like the women’s march in South Korea, D.Va is revolutionary in her culture — something that, in the midst of her memorable one-liners and adorable emotes, she doesn’t tend to get enough credit for. Through her visible existence as a hyper-feminine soldier who plays video games, she presents a unique accessibility that femme girls and women have largely been unable to have in gaming, especially in the world of esports, until now — and it’s most evident through her merchandise. In seas of licensed merchandise on sites like the Blizzard Gear Store, Jinx and Hot Topic, and fan-made creations on sites like Etsy and Redbubble, D.Va’s merchandise is loudly pink and incorporates pastels and cute animal faces. It’s relentlessly feminine. Her merchandise isn’t just an indication of her success as a character; it also conveys how vital her role within a male-dominated space is.

Taking a look at the Overwatch section of the Blizzard Gear Store will quickly make it evident as to why D.Va’s merchandise stands out. From accessories like the Razer D.Va Abyssus Elite Mouse to the D.Va Toddler Tee, D.Va’s merchandise is more extensive than that of any other character, and every piece incorporates varying shades of pink that immediately stand out amid the merchandise of other Overwatch women, which leans toward neutral colors. Some merchandise isn’t even limited at containing pink; it has an explicitly feminine design. On ThinkGeek, there’s a particularly adorable D.Va hooded varsity jacket that has soft pastel colors and, most importantly, bunny ears on the hood.

D.Va’s merchandise doesn’t need to forsake her femininity to be successful. In addition to official merchandise, online marketplace sites like Etsy and Redbubble have an even larger variety of D.Va merchandise, ranging from original cosplay to custom-made skins for the Nintendo Switch. Despite the variety, the picture remains the same: D.Va is consistently the only character who has pink in almost all her merchandise — and neither the character nor the items are less successful for it.

Pink is an essential facet to D.Va’s design: She has pink marks on her face and pink on her suit, a pink gun and she controls a giant pink mech. Her merchandise isn’t designed to conform to the gaming industry’s fixation on making merchandise feel easily accessible to men even when it’s for women; you either connect to it or you reject it.

While other popular series like League of Legends, World of Warcraft and The Witcher have plenty of merchandise of their characters, D.Va’s merchandise stands out through its hyper-femininity. Merchandise for other characters, including those who are women, tends to not only stick with the safe neutrals but also lean toward a masculine style, even if the merchandise is for or about women.

For example, Horizon Zero Dawn — which has a protagonist that is lauded as a rising icon in gaming for women — has licensed clothing that portrays the game’s beasts instead of Aloy, and possesses no feminine design or colors. League of Legends, despite being the most popular multiplayer game in the world, boasting over 70 million registered players and having 43 champions who are women out of 141 champions, has only one pink clothing item over at the Riot Games merch store for a champion named Ahri, a nine-tailed fox seductress. 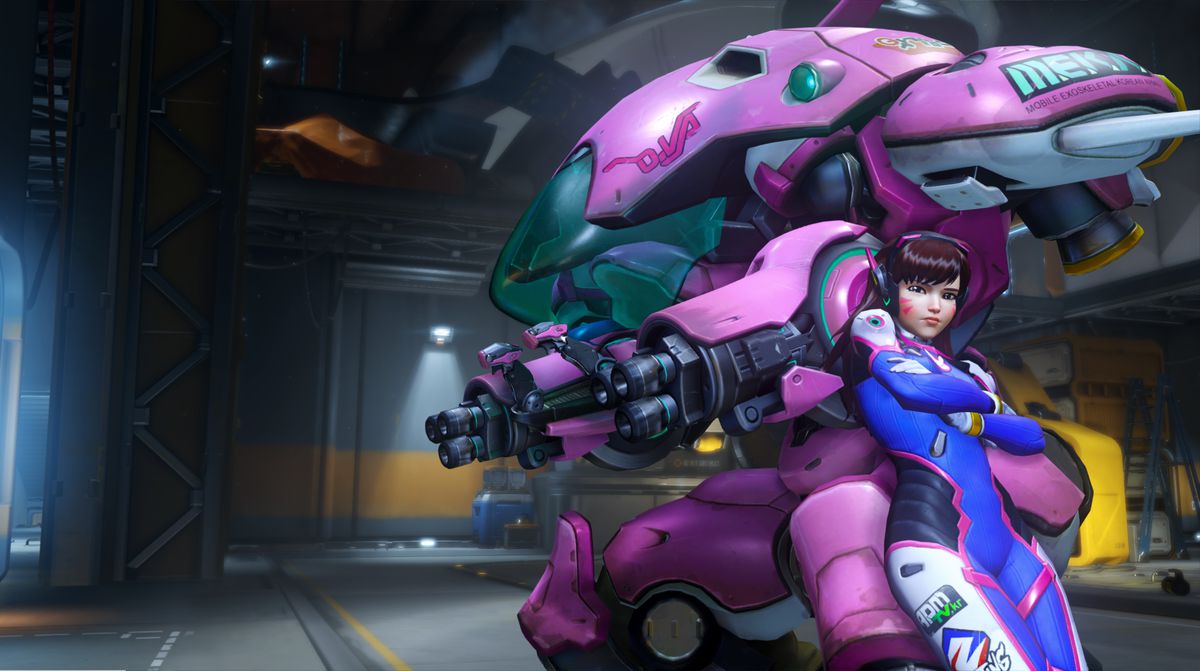 Even though gender-neutral shirts are accessible to everyone, and more accessibility is something to celebrate, the context of the gaming industry modifies its meaning. D.Va’s merchandise — and how it doesn’t forsake the femininity of the character it is based on — is empowering because it offers access to a specific group of people that has historically been unable to feel welcomed in gaming culture. Women, especially feminine women, have been unable to be taken seriously despite the fact that 45 percent of gamers in the United States are women.

While many women don’t identify with hyper-femininity, many women who play video games do. Many of us once wrestled — or perhaps still wrestle — with degrees of internalized misogyny, as we can struggle to embrace a hobby that we’re told belongs to boys and men while trying to embrace ourselves as women.

I remember going through a phase where I would lie and say I hated pink — despite it being my favorite color — simply because I didn’t want to be like “other girls.” I wanted to be a tomboy because tomboys are cool and wouldn’t be excluded by the boys who would bring their game consoles to class parties, or by the guys that played in the same LAN room that I did in a local video game store. Pink is undeniably associated with femininity, and femininity was something I was often made to feel like I had to deny so I could be granted acceptance. It took years before I realized that I loved being girly and playing video games— and that I didn’t need to choose between the two because they’re not mutually exclusive. Today, I look at D.Va and wish I had someone like her to look up to as I grew up; to show me that there was nothing to worry over. There was never a valid reason as to why I should have tried to sacrifice one aspect of myself for another to fit in.

D.Va is the first character of her kind in a game with the success and notoriety that Overwatch has. She’s more than just a single character; she’s a monumental milestone that many people — especially women of color — have worked toward making a reality for years in the gaming industry. Blizzard’s decision to make her a professional gamer and the most feminine character in the Overwatch roster feels beautifully deliberate. It would be almost poetic, for D.Va explicitly adheres to a gamer archetype by literally being one while simultaneously subverting it through her hyper-femininity. She bridges the gap between a male-dominated activity and femininity — and she has done this on a scale that arguably no other singular character has done.

Because of D.Va, girls today will be able to grow up differently than I did. They’ll spend their days playing a game that, among the people who are meant to save the world, includes a small young woman of color who used to be a pro gamer before she became the pilot of a bright pink mech; who has a high-pitched voice and fuchsia markings on her face; and whose aesthetic and design is the most feminine it could possibly be. Perhaps one day, women won’t need to march for someone like D.Va to exist. The world could always use more heroes like her.