We take a look at the three slightly challenging available-to-all Gods to play in Ability Arena – Kanna, Ogre Magi and Selemene.

A few days ago, GosuGamers put up a guide for the three most basic Gods of Ability Arena. In case you are new to Ability Arena, it is a good idea to stick to those three for the first few games, before venturing onto slightly complex Gods.

But if you are at that level of taking a plunge into the more challenging depths of the game, there are three heroes with a medium level of difficulty (two star difficulty) that are available for all to play. The three heroes are-

Let’s take a look at how best to approach these three Gods in a bit of detail.

While it is a good practice to check the available and banned skills for all games to see which God might be the best for a particular game, for no God does it matter as much as it does for Kanna. There are 11 summons related skills in the game, and if you pick Kanna while a majority of them are banned, it could very well end up being a disaster.

Even in the 11 skills, there are certain ones that are much better than the others. But that also depends on the experience and playstyle of a player.

For maximizing the buff on the hero who wields ‘Prey on the Weak’ and the summons, the equation is pretty simple – have more summons on the board. But that does not mean all 11 skills need to be used (if available). It means making the best use of the skills that you get in the game, and not rerolling till every summon related skill is in your arsenal.

While playing Kanna, players can also lose track of the fact that their damage does not have to be all from summons or the right clicking hero with the ‘Prey on the Weak’ buff. So while you should be on the lookout for summons related skills, other good skills should not be ignored.

In the summons, there are variations in the skills. Skills like Vampiric Spirit and Plague Ward are necessary to have a lot of summoned units on the board. That ensures a high attack speed for the buffed hero and summons. But it is also important to get skills like Chaotic Offering and Spirit Bear, because those summons can really dish out the damage with the help of the additional attack speed. A good balance of the two is what players should aim for.

The important skills while playing Kanna are quite obvious, which are the ones related to summons. But there are a few others that can help get the strat together.

Tag Team – This amplifies right click damage from all units, and that includes each and every summoned unit. It can be a significant increase in damage.

Wild Axes – Any unit hit by Wild Axes takes more damage from the hero using the spell as well as units under the hero’s control. So if a hero has three abilities to summon units paired with Wild Axes, those units will do more damage to any enemy unit that has the Wild Axes debuff on them.

For the hero with the ‘Prey on the Weak’ buff on it, attack speed isn’t a priority, and damage skills should be prioritized. However, that will depend on which summon skills you possess. In certain circumstances, something like Chemical Rage or Fervor might come in handy on top of the attack speed buff.

Ogre Magi’s ability, ‘Multicast’ can be used on one hero. The chance to Multicast increases as the spell points increase, starting with a minimum of 25% and maximizing at 65%. 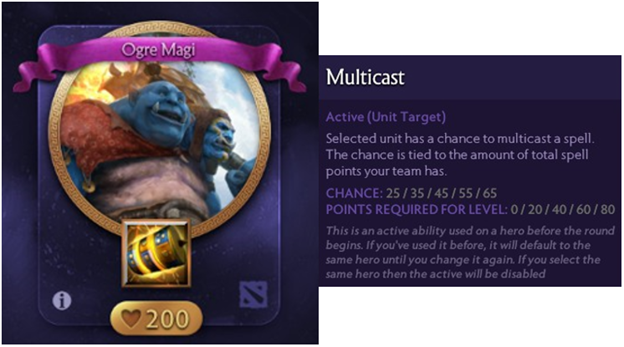 The chance that a spell is multicast depends on the total spell points acquired by the player. Unlike Dota 2, the multicast buff only makes a skill be used twice, not more than that.

Spell points, as seen in the Legion Commander guide, is the sum of skill levels of all skills each of your heroes have and the skills on the bench. So in the case of Ogre Magi, it is a good thing to have more skills to increase the chance of the skill being multicast. Reaching If all five heroes have four skills with an average skill level of 3, that is 12 spell points per hero, and a total of 60 spell points. That is the number you should aim for in the mid to late game, as it will give you a proc chance of 55% for the hero with the ‘Multicast’ buff. Hitting 80 spell points is a bit difficult, and will only happen if you’re either really lucky and get  higher levels for a lot of spells or the game drags on for a long time.

To get the most out of Ogre Magi, the buffed hero needs to be given spells that can make a big difference when multicast. A couple of good examples are Chain Frost and Lightning Bolt. If Chain Frost is multicast (especially Super or Gaben Chain Frost), it is going to do significant damage. Similarly, if a Super Lightning Bolt is multicast and you get two Nimbuses (or Nimbi –  Merrriam-Webster says both are correct, although knowing that won’t help you win with Ogre Magi).

Besides the big cooldown skills, it is good to have one or two small cooldown skills like Dragon Slave or Death Pulse as well. That way, the more the buffed hero stays alive, higher the potential to multicast and deal a lot of damage. But care should be taken that the main hero does not run out of mana. For that, a hero like Outworld Destroyer or Pugna, that has a high mana pool, is necessary.

It is also important that the hero with the ‘Multicast’ buff is able to get off all the spells. For that, a frontliner with initiation skills like Chronosphere or Ravage helps. While the opposition heroes are stunned, the focal point of your team can roll the dice, hoping to get twice the damage with every skill used. It isn’t necessary that the buffed hero has to be on the backlines. One in the front with a low cooldown spell like Quill Spray can also work, but in that case, there is a higher chance of the main hero dying early.

Channeling skills like Death Ward are a big no for the buffed hero while playing Ogre magi. You will not get two Death Wards. In case it multicasts, the first one will stop and the second one will be used, and the hero will also end up being occupied while channeling it, and won’t utilize the time for other casting spells.

In the game shown below, Lina was given the ‘Multicast’ buff. She had four active abilities, but she is an S-tier intelligence hero so she has the mana pool to use them all and have some left for round two.

Selemene’s buff, ‘Dark Moon Blessing’, is a team buff. While playing with Selemene, every hero on your team will have an additional 0.015% spell damage for each COLLECTIVE point of mana spent mana. This means if the team spends 1000 mana, all spells will deal 15% additional damage! This damage increase was initially 0.04% per mana point utilized, which was nerfed to 0.02%, and now stands at 0.015%. 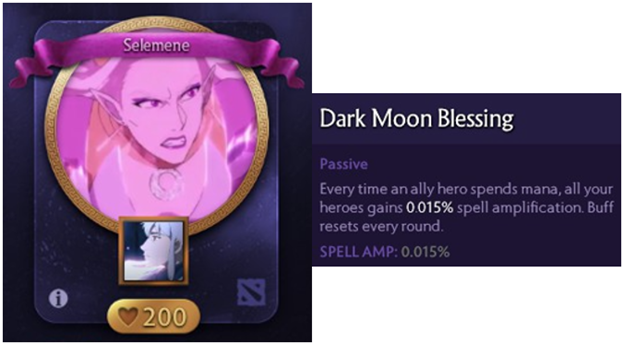 To maximize Selemene’s hero buff, two things need to be kept in mind-

●        There should be maximum utilization of mana

Maximum utilization of mana – Because the ‘Dark Moon Blessing’ is based on the entire team’s mana consumption, it is beneficial to make sure that each of the five heroes has abilities that will do so. A lot of times, tanks in the frontline have passive abilities like Dispersion and Kraken Shell which keep the enemy engaged. While that isn’t a bad strat, it does not help in increasing the team’s spell damage to unleash the full potential of Selemene.

Continuous spell usage – Spells that have a one time use and a long cooldown can come in handy for the initial depletion of mana. But the spells that are the game winners are ones that are short cooldown spells that keep dealing damage throughout the round.

Like mentioned above, the skills or spells that Selemene requires are ones that have a short cooldown and can be used continuously throughout the round. Now I am not the best Selemene player in the game, and I have had a lot of hit or miss games with her (more miss than hit). But GosuGamers’ Div is an Ability Arena player who prefers Selemene over all other Gods. This is her advice for all budding Selemene players-

You should select Selemene only if you have strong spell damage abilities to play with. Probably the best spell for her is Pulse Nova (I always pick Selemene if Pulse Nova is in the pool) (Another instance of checking the available spells for deciding what God to play with).

You want your Pulse Nova on a tanky S-tier frontliner (Primal Beast or Kunnka ideally).

One of the best skill builds for the hero with Pulse Nova is:
Blade Fury
Pulse Nova
Windrun
Trample

Pulse Nova is indeed one of the cornerstones of Selemene. The spell consumes a lot of mana and deals heaps of damage, which just keeps increasing with the reduction in the team’s combined mana pool.

But in the recent update, a new spell has come to light, which absolutely elevates Selemene to beyond Godly status (she is already a God in the game, remember?). Mana Shield is a spell made for her – it increases the mana of the hero, increases tankiness, and is a sure fire way of ensuring the mana goes to 0 before the hero dies. In the second one of Div’s recommended combos, the mana depletes and is regenerated thanks to Essence Flux! So the cycle of ‘mana depletion-spell amplification-mana regeneration’ continues as long as the hero is alive.

For the heroes behind the frontliner, spells like Dragon Slave, Mist Coil and Fade Bolt, which are bound to be used multiple times in a round are extremely good.

But in another game, I ended up going with one frontliner, just for the initiation, and four heroes positioned behind to deal the damage. In the case of Selemene, there are a lot more options and ways to play the God as compared to most of the other heroes.

With that, we come to the end of all six basic heroes in Ability Arena, which are available for all to play. While guides can give you some idea, there is no substitute to going into the trenches and trying out a myriad of strategies yourself!