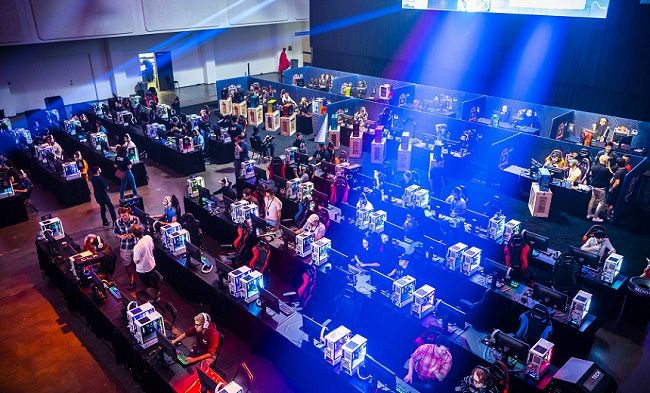 If you’re an avid computer gamer, there are often few opportunities to play video games in the same physical space as others due to logistics. For aspiring Dota 2 professionals, competitive LAN opportunities are as important as they are infrequent.

Red Bull AdrenaLAN, hosted in Toronto, Canada from July 27-29, tapped into that magic with their wide-ranging approach to draw in the Toronto esports community. It was an ambitious effort: an impressive, convention-sized venue with sections for multiple esports titles, as well a general gaming section for more casual play, and a pair of show matches for fans of Dota 2 and Starcraft 2.

It wasn’t a perfect affair; much like the at-home variety, AdrenaLAN had to adapt throughout the weekend. As an example, an impromptu viewing area was set up for the Starcraft show match when it became evident some attendees wanted to watch from within the venue. There was also some difficulty keeping attendees entertained when they weren’t using a computer—the show matches helped, but a way to watch the community tournaments would have provided longer term viewing opportunities.

Regardless, I left AdrenaLAN with the strong sense the next iteration will improve on the first, and that this event helped to fill an important gap in the local esports community.

Though the event had opportunities for fans of several titles, I want to focus on how AdrenaLAN supported Dota 2. The event provided a space for players of all skill levels to come together. Casual players had the opportunity to play some friendly games; competitive amateurs and up-and-coming pros could network with each other and compete in the community tournament for respectable prize money (the Dota 2 prize pool was $5000 CAD).

And, of course, there were the pro players. Two Dota 2 pro teams, OG and Immortals, competed for $10,000 CAD in a best-of-five show match broadcast by Moonduck Studios. The teams also participated in a meet-and-greet with fans. The opportunity to chat with professionals about their approach to the game and the industry is valuable for aspiring pros. It also helps humanize these giants of the industry, making them seem more accessible.

The comparison to DreamHack, a popular digital festival, is apropos. Though DreamHack happens on a larger scale and incorporates other components, such as an expo and live concerts, the core of it has fans of video games hauling their computers to a shared location to play together.

AdrenaLAN represents a kind of event that is especially needed in Dota 2 right now: events for semi-pros. Its Dota 2 tournament supported players at a local level, offering a competitive LAN experience as well as a cash prize.

I’ve written before about the amateur scene. It’s an important tier of the esports scene as it facilitates the development of new talent for the professional teams, but it’s underdeveloped and needs to be more robust to support players on the journey from casual player to professional.

There’s been much a lot of chatter lately about the shortcomings of the Dota 2 esports structure. Insiders have had a lot to say about the current distribution of resources, and it all sounds unhealthy for everyone but the players sitting at the very top of the standings.

Will Partin published an article with Kotaku, “The International Is Bad For Dota” in which he broke down how the single tournament dominates the calendar because of its prize pool and the way it incentivizes players (read the article, my summary doesn’t do it justice!). While an increase in smaller tournaments aimed at less skilled players doesn’t address the issues of The International directly, they do provide some financial aid and incentive to those looking to make the transition from hobbyist to competitive gamer.

Get a glimpse of a day in the life at #RedBullAdrenaLAN. pic.twitter.com/4yDLFTzZVm

Further, in his Medium article, “European Dota needs assistance,” Sovann “Skim” Kim wrote, “…there is no tournament structure that allows these talents to be properly scouted […] The other issue is the lack of organizations in Europe.” He identifies two issues that events like AdrenaLAN can help address—by offering financial rewards for low tier players and by providing a platform for exposure both for players and for organizations that support them (though AdrenaLAN didn’t broadcast the community tournament, an oversight that will hopefully change for next year). Exposure as an incentive is often derided, but for players who want to be discovered by established professionals, and for organizations that want their sponsorships to be visible to an audience, exposure is an important tool.

That said, obviously $5000 prize pools can only go so far for a team of five players. There’s a point when players need more financial support so they dedicate their own efforts to practice rather than day jobs, but an event like AdrenaLAN can be a stepping stone for aspiring pros towards that goal.

As we head into The International 8, our focus is logically on the best-of-the-best in Dota—the best players and teams, the best coaches and managers, the best talent and content creators. TI is a celebration of all things Dota, however, and it’s important to remember that these individuals at the peak of our community are supported by so many of us. We need to reinforce and upgrade the infrastructure that allows the annual festivities of The International to take place.

Support your local communities. Support organizations that are interested in the amateur and semi-pro Dota 2 scenes. Get out to these events when the opportunity arises!