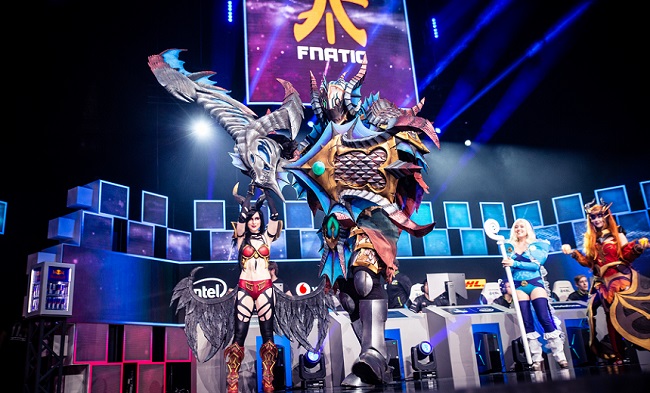 From artwork to food, podcasts to cosplay, let’s take a closer look at what it’s like to create Dota 2 content.

Winner of the ESL One Birmingham 2018 cosplay contest. Photo is copyright: ESL | Adela Sznajder (who, as a photographer, creates some amazing content!)

What do you do when there are no professional Dota 2 matches to watch? Whether it’s a break in the season, a gap in the schedule, or even just downtime between series, a popular way for fans to fill their time is by consuming anything related to Dota 2.

I want to take a moment this week to think about what goes into content creation. How and why do people get involved in it? A good chunk of the material we consume is made by amateurs, hobbyists, and fellow fans who just want to combine their love of Dota with their creative skillset.

If you read my article last week, Daeja’s View: Happy Birthday, Dota 2, you likely noticed the pictures of food inspired by Dota 2. That was all content created by members of our community, people inspired to make Dota 2 themed food and cakes who then kindly (tauntingly?) shared mouthwatering images with the rest of us.

If you’ve ever watched a cosplay contest at a Dota 2 LAN or admired cosplay pictures, you’ve consumed Dota 2 content. And while you may have appreciated that contest or taken a minute to acknowledge how awesome the cosplay in the photo is, when was the last time you really thought about the hours that went into producing it? Your minute of entertainment could have taken someone else dozens or even hundreds of hours to create.

Going to the Source

To better understand what the experience of making content for Dota 2 is like, I spoke with two different content creators: liliSliph and Bee (or beedub). LiliSliph may be familiar to you for her The International 6 cosplay-contest-winning Legion Commander. More recently, she’s submitted merchandise concepts to the workshop for consideration. Bee is involved with Fourth Spirit (formerly Defense of the Patience), making podcasts such as “Teach Me Tuesday” and “Theorycraft Thursday.” She also provides artwork for shows produced by Desoladies, a community that she co-manages (full disclosure: I’m a member of Desoladies), and she streams on both her own and the Fourth Spirit Twitch channels from Monday to Friday.

The official photo for my submission! So exciting! #cosplay #cosplaycontest #dota2 😀 https://t.co/6MqoGMNEQK pic.twitter.com/0i5v0wXwaV

I was interested in how each of them got involved in content creation. LiliSliph told me that Dota 2 cosplay was a natural step due to her love of costumes and because she started attending Pax Prime around the same time she started playing Dota 2. She said, “Dota 2’s character design and lore is amazing, so my boyfriend CrimsonZen and I naturally chose to cosplay together as Templar Assassin and Juggernaut. Then the following year I got super ambitious and built Legion Commander, which I iterated on until TI6.”

Bee’s path to podcasting was a bit different in that she didn’t already have a love of making audio content. Her own work is focused on graphic design. Instead, she was, “a listener of Defense of the Patience for a year or so before (she) started working for them doing Graphic Design & Social Media.” Then, after meeting the DotP gang at The International, they asked if she’d be interested in working on an educational show they wanted to bring back into rotation. She added, “I didn’t really intend on being on the podcast but when the opportunity arose I thought, why not! It’s something I’d never tried before so (I) went for it.”

Going for it seems to be the best piece of advice, ultimately. If you enjoy making something that can be themed Dota 2, and you’re open to sharing it with the community, there’s a potential path there, particularly if you are only looking to contribute to the community rather than make a career of it.

It’s clear that many Dota 2 projects require a lot of time and expertise. I wanted to know how it was possible to fit this kind of endeavor, especially as a hobby, into a busy life. Both creators told me that they had flexible schedules, making it possible to devote the needed time to their Dota 2 efforts.

I also asked about developing new skills to support their work—was it possible content creators are just naturally amazing at everything they produce? (Spoiler alert: That is very much not the case!)  Bee wrote that she’d, “never had to think about (her) spoken communication skills so much. Knowing how to change the subject or direction of the episode on the fly is really tricky.” And LiliSliph joked, “If you want to go on an adventure full of learning and frustration, cosplay’s where it’s at” after she told me about the variety of new techniques and materials she’d learned to work with both to create her cosplay and to make merchandise prototypes.

Both creators are multi-talented hobbyists, open to new opportunities. While the work they produce is very different, there are similarities in their experiences, such as in their interactions with the community. I was pleasantly surprised to hear from both of these creators that it’s not a thankless hobby.

All my Dota projects have garnered amazing community experiences. I met so many great cosplayers and workshop artists at TI, and everyone is extremely supportive of each other’s work. During the event we all tend to help each other out, collectively making sure everyone stays in one piece.  We’re also all connected through Twitter and Discord…

And Bee told me,

We did a Fourth Spirit meet up at the recent Birmingham Major in the UK, as most of our listeners are NA based, I assumed the turnout would just be a few people, but in the end we had around 25-30 different people come and say hi which was amazing and it was so nice to be able to meet listeners. There’s a real sense of community.

The development of community around content creators is a great way of supporting their work. These niche spaces are also a fantastic place for fans to meet each other and connect over their shared appreciation of the game.

This material unites us even more strongly as a community of fans. We increase our set of shared references and we have opportunities to come together in purely positive ways as we appreciate the work done by others. While we may disagree about game fundamentals, cheer for different teams, or argue about the best format for a tournament, we can come together to appreciate a meticulously drawn hero. Let’s continue to take time to appreciate the people making all the incredible content that enhances our Dota 2 experiences!

Thank you to liliSliph and Bee for taking time to discuss their work with me. You can find liliSliph on Twitter @lilisliph and on her website, lilisliph.com. If you’re looking for Bee, check out the Fourth Spirit website, her personal Twitch account, or find her on social media through Twitter @ayupbeedub and Instagram.