The TI11 Last Chance Qualifiers saw 108 heroes picked in what is appearing to be an exciting meta.

The TI spirit has encapsulated the Dota 2 community after five days of grueling Dota 2 action in the TI11 Last Chance Qualifier (LCQ). Twelve teams – two from each of the six Dota 2 regions – went to battle it out for two spots at The International 2022 (TI11) in Singapore, and only two earned the right to compete with the elite for the Aegis. Both teams ended up being from the same region – Western Europe. Surprise, surprise! Team Secret and Team Liquid battled their way through the group stages and playoffs to make it six WEU teams at TI11, which is twice as high as the next region(s).

A total of 103 games were played over the five days of the LCQ. This was the first premier event where teams from all six regions had the time to think about the new patch (Dota 2 patch 7.32) and get some scrims under their belts before getting to the tournament games. So not only did the LCQ provide us with some amazing games of Dota 2, but it also gave us an idea of what the TI11 meta looks like and which heroes we can expect to see more of. Let’s take a quick look at what it is like.

Most Played Heroes of LCQ

There is a long list of heroes with 20 games or more, but the ones that stand out are Undying and Shadow Fiend, with 44 and 38 games respectively. Undying has been a strong hero for a while now, and even though he was nerfed in patch 7.32, continues to be a nuisance.

But the success story of the meta is Shadow Fiend – a hero that hasn’t been a popular meta pick for a long time. Buffs to Nevermore’s laning stage have made him a viable option in the mid as well as the safe lane, but irrespective of the lane, he usually ends up playing the position 1 role. Shadow Fiend has mostly been played as a right click hero, and quite effectively so, with a win rate of over 60%. But Team Liquid’s mid laner Michael “miCKe” Vu showed that spell caster build can be extremely effective too.

It might be a bit too early to tell, but after the recent nerfs to Faceless Void, it seems like Morphling is ready to take over as the carry of the tournament. Morph is being played as a position 1 hero in the mid lane as well as safe lane (same as SF). With his new Aghanim’s Shard upgrade, which allows him to use Attribute Shift even when stunned, the hero has become extremely difficult to kill. Morphling is up there with a nearly 60% win rate Faceless Void, who was over 65% in the TI11 qualifiers, now sits at 27%.

Most Contested Heroes of LCQ

Even in tournaments where a crazy number of heroes are picked, there is always a cluster that is extremely popular amongst all teams. For the LCQ games, the five top miscreants are Marci, Enigma, Undying, Primal Beast and Morphling. The first three have a contest rate of over 90%, with Marci going the distance with 100%. And in the 17 games she has been picked, Marci has a win rate of over 76%. There is a good reason for her getting banned in 86 of the 103 games played. All 86 bans are in the first phase! Definitely expect to see a lot of Marci at TI11, either picked or banned. 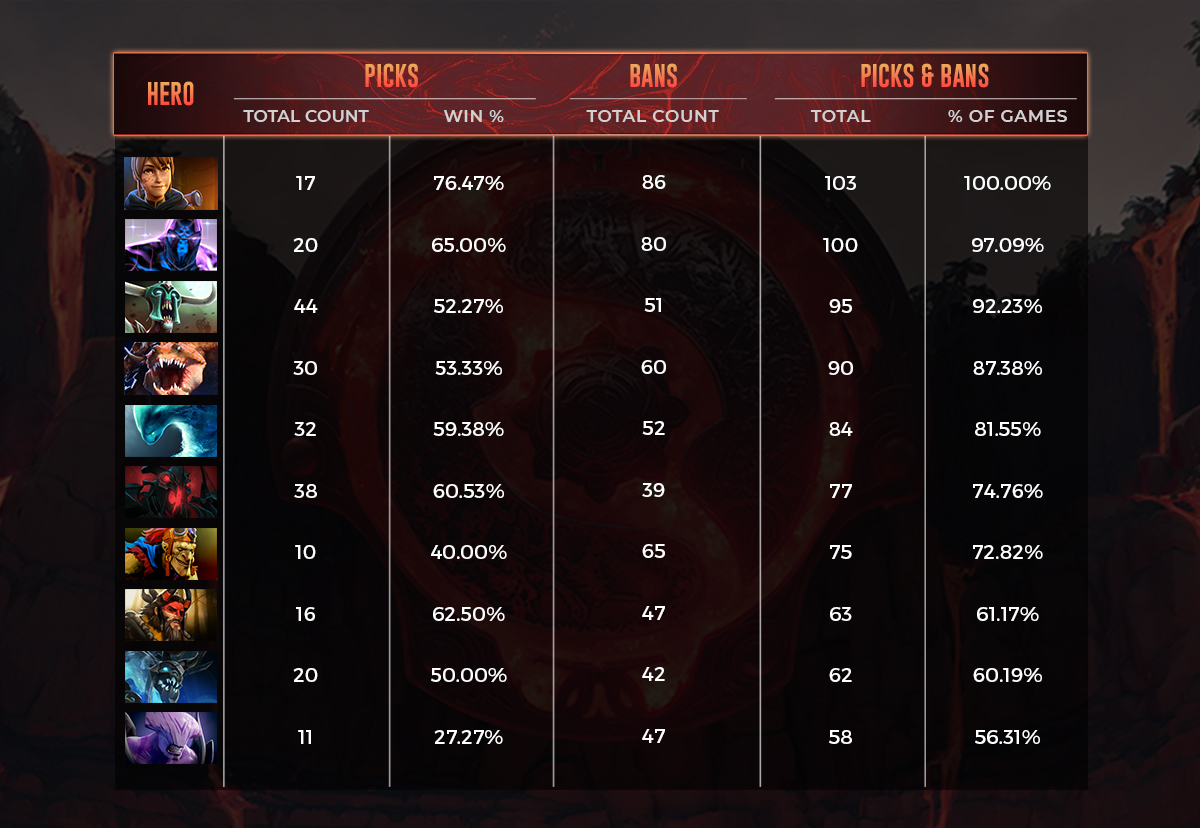 Nearly all of the most contested heroes have above average win rates. The only two that don’t are Batrider and Faceless Void. We might see less of those heroes going ahead. But the ones at the top with contest rates over 80% – they are here to stay, possibly till the last day of TI11.

Of the 123 heroes in Dota 2, 15 were completely ignored in the TI11 Last Chance Qualifier.  There is still a lot of Dota 2 to be played, and with the best teams in the world coming up with their own strategies, more than a few of these heroes are bound to pop up in games.

While there are a lot of heroes still in contention from patches from the recent past, there are new names popping up as well. The meta is still developing, and in long tournaments like The International, it is always a dynamic meta, which changes with the tournament. That is likely to be the case more than ever this year, because of the longer duration of the tournament and the bigger breaks between games.