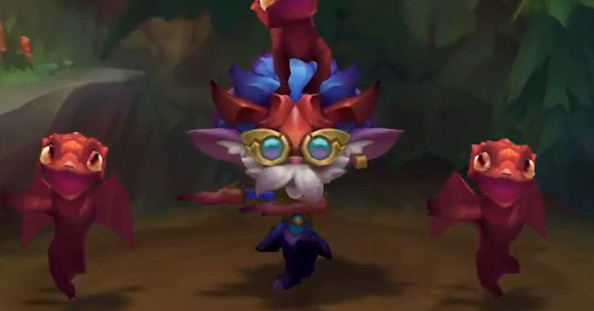 Dragon Trainer Heimerdinger has a ton of scaly friends

After a video teaser released over the weekend, we’re finally getting a real look at Heimderdinger’s new skin. Dragon Trainer Heimderdinger is coming to patch 8.20.

Two League of Legends Twitter accounts shared video clips of the new skin and its recall and dance.

Look at that adorable jig! So coordinated! So cute!

His recall shows quite a few dragons. The smaller blue one is his normal turret and the larger one seems to be his ultimate empowered turret, as seen in the video. The red dragon is likely for his Homeguard animation, which normally has him zooming off using a rocket stashed away in his hair.

The price for this skin is tentatively set at 1820 RP, as it comes with a whole set of new models for Heimer and his various tools. Err, I meant dragons.

This is Heimerdinger’s sixth skin, with his last being Hazmat, which released in July 2014. (That was over four years ago! Yeesh!) We knew Heimer has been on Riot’s list of neglected champions to receive a skin this year, so we’re glad its a pretty dang good one.

This article will be updated as more information becomes available.