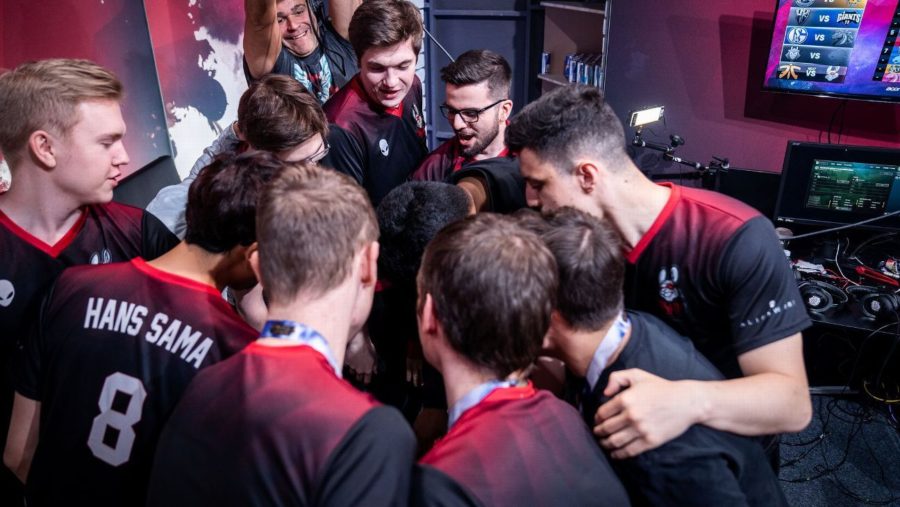 Virtually the only negative for Misfits (6-0) in this game was that it managed to give up a kill, tower and dragon to ruin a chance at a perfect win. Other than that, however, Misfits easy handled its opposition, as H2k (0-6) could do nothing to stop it.

From the outset, jungler Nubar “Maxlore” Sarafian made it his mission to roam both of the side lanes, securing leads for both top laner Barney “Alphari” Morris and AD carry Steven “Hans Sama” Liv in the top and bottom lanes. From there, everyone on Misfits got in on the action any chance they could. Everyone on Misfits, with the exception of support Mihael “Mikyx” Mehle who still tallied a 0/0/10 KDA (kills/deaths/assists), compiled at least two kills as Misfits rained destruction from every angle. H2k struggled mightily to match the pressure as Misfits did whatever it wanted throughout the course of this 23-minute romp.

Another round of decisive play has Misfits looking like one of, if not the most, dangerous teams in the EU LCS. Every outing, it knows exactly what its path to victory is and then proceeds to perfectly execute its game plan. The manner in which it racks up both kills and objectives with such ease seemingly catches every team off guard and as a result, Misfits are on a six-game win streak.

Both teams will have the week off due to Rift Rivals taking place next week. Misfits returns at 3 p.m. ET on Friday, July 13 to face G2 Esports, while H2k are back in the preceding match against Team Vitality at 2 p.m. ET.

When Vitality (4-2) picked up kills in both the top lane and mid lane simultaneously a few minutes into the game, it was clear that the team was ready and willing to be the aggressor. As such, Vitality never let up the pressure at any point and simply ripped Schalke (2-4) to shreds whenever possible.

It got started with jungler Erberk “Gilius” Demir roaming the map and making sure that everyone was getting involved. While this helped top laner Lucas “Cabochard” Simon-Meslet and AD carry Amadeu “Attila” Carvalho immensely, mid laner Daniele “Jiizuke” di Mauro didn’t even need the extra help. Jiizuke was single-handedly laying waste to anything that dared step foot in his lane. The most telling example of his sheer dominance was when he turned around a 1-vs-2 and wholly outplayed Schalke jungler Maurice “Amazing” Stuckenschneider to pick up a kill while preserving his own life. That one sequence was enough to show the stark difference between these two teams.

Despite the crushing 30-minute loss, Schalke managed to somewhat salvage a bit of its pride with a few scattered kills throughout the game. The kills were still few and far between, though, and didn’t do much to prevent Vitality from continuing its romp through the game. It simply looked as though the early haymakers from Vitality left Schalke with no idea of how to get itself back into the game, resulting in its swift demise.

Schalke will return after Rift Rivals to face Giants Gaming at noon ET on Friday, July 13, while Vitality takes on H2k Gaming later that day at 2 p.m. ET.

Fnatic demolished Giants Gaming in a display of dominance. If this game had had a title, it would have been something along the lines of “The Tragedy of Risto ‘SirNukesAlot’ Luuri.” The support made the questionable choice of selecting the off-meta Zyra, which was particularly dangerous into the Pyke of Fnatic support Zdravets “Hylissang” Iliev Galabov. With a complete lack of escape abilities and negligible defenses, SirNukesAlot was vulnerable to hooks from Hylissang, who secured the first kill onto the Zyra at the two-minute mark.

This first death was only the tip of the iceberg, as Fnatic bottom laner Gabriel “Bwipo” Rau’s Yasuo proved a deadly pairing for Hylissang’s Pyke, leading to a second 2-vs-2 kill at four minutes. Giants (1-5) attempted to respond by swapping its bottom lane to the top side, which resulted in some success, namely a kill and first turret. However, this was only a momentary respite for SirNukesAlot, who quickly re-established himself as a regular in the death chamber.

Due to his numerous deaths over the course of the early game, SirNukesAlot didn’t hit Level 6 until a full 14-and-a-half minutes into the match. By then, Fnatic’s lead was essentially insurmountable. It was all Giants could do to play a bit of hide-the-Zyra as Fnatic ended the game in under 23 minutes. SirNukesAlot’s KDA (kills/deaths/assists) read 1/7/0 as his Nexus exploded.

Giants Gaming will kick off the day at 12 p.m. ET with a game against Schalke 04 on July 13, while Fnatic will close out the day against Splyce at 4 p.m. ET.

In a battle of polarizing playstyles, Splyce prevailed over Team ROCCAT.

Taking a recent metagame trend to a new extreme, Splyce (2-4) elected to take Teleport on four of its members. Both the benefits and drawbacks of this strategy were highly visible throughout the game. Splyce continually won out on early engagements, consistently bringing in over half the team to simply outnumber and overpower ROCCAT (3-3). However, using up the team’s Teleports like this left Splyce with a somewhat ironic lack of map pressure, and it bled turrets and objectives, leaving the gold close.

The diametrically opposed play of Splyce and ROCCAT came to a head at 29 minutes, as ROCCAT top laner Kim “Profit” Jun-hyung split-pushed as Camille in the bottom lane while Splyce tried its hardest to engage a 5-vs-4 fight around Baron. Running Splyce around the map, ROCCAT was able to take the bottom inhibitor and Baron for itself, only for a triple Teleport from Splyce to allow it to strip the buff off three members. By the time the next Baron spawned, ROCCAT’s map advantage had expanded alongside Splyce’s kill lead, leaving the gold nearly dead even.

Ultimately, Splyce’s teamfight dominance tipped the scales. Around the 37-minute mark, a Teleport engage from top laner Pascu “Odoamne” Andrei on Aatrox backed up by the Hero’s Entrance from mid laner Yasin “Nisqy” Dincer’s Galio allowed Splyce to easily clean up ROCCAT and take both Baron and Elder Drake. With the twin buffs, it was trivial for Splyce to eradicate ROCCAT’s objective lead, breaking the base and then finally taking the game off of one final teamfight at 44 minutes.

Splyce will look to prove itself when it closes out the day against Fnatic at 5 p.m. ET on July 13, when the EU LCS returns from its Rift Rivals hiatus. Earlier that day, ROCCAT will face off with Unicorns of Love at 1 p.m. ET.

G2 Esports took down Unicorns of Love on Saturday to close out Week 3 of the European League Championship Series Summer Split.

The standout pick in this game was undeniably the Heimerdinger for G2 bottom laner Petter “Hjarnan” Freyschuss. The strengths of the rarely seen champion were evident, as G2 (6-0) was able to shove bottom lane hard enough to find first turret. Meanwhile, mid laner Luka “Perkz” Perkovic was finding similar success on Lucian, growing a CS advantage while dodging multiple ganks. Between these two champions, as well as a Rift Herald, G2’s early tower pressure was immense, leading to a 4-to-0 turret score before the 18-minute mark.

With this objective advantage came a sizable gold lead, and before long G2 began to run away with the game. Unicorns of Love support Eun “Totoro” Jong-seop on Pyke quickly became all but useless, as he had virtually no chance of finding a favorable engagement. Meanwhile, Hjarnan was able to highlight some of Heimerdinger’s other potential strengths, landing huge area-of-effect damage in multiple fights and skirmishes to demolish Unicorns of Love (2-4). At 22 minutes, this led to a Baron for G2. Between G2’s gold lead and the Baron buff, Unicorns all but rolled over to allow G2 to take the game in just over 24 minutes.

G2 Esports can go into Rift Rivals next week with confidence and an undefeated record. When it returns to the EU LCS on Friday, July 13, it will face off with fellow undefeated team Misfits for sole possession of first place at 3 p.m. ET. Earlier in the day, Unicorns of Love will take on Team ROCCAT at 1 p.m. ET.