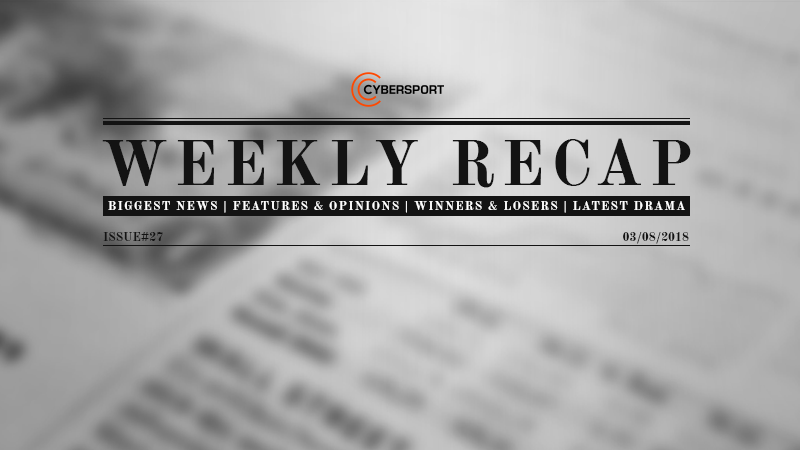 Eyes on TI as NRG and Tyloo impress in Shanghai: Weekly Recap | News

As Dota fans eagerly anticipate an ever-nearing TI, NRG Esports and TyLoo turned up the heat with some impressive Counter-Strike play in Shanghai, and two new franchise cities were announced for the Overwatch League. It’s the Weekly Recap!

Earlier this morning the group stage officially concluded, deciding which four teams would make it to the semifinals of the event. NRG Esports topped group A, with Virtus.pro securing the second semifinal slot, while home representatives TyLoo were at the top of group B, closely followed by Gambit Esports.

Riot Games gear up for their next big games

Riot Games co-founder Marc Merrill gave an exclusive interview to Variety about their plans for their next big projects. Nine years after launching League of Legends, Riot is planning the same sort of fan-driven ultra niche titles that made its initial game such a spectacular success.

According to Merrill, the goal for Riot Games moving forward is to release a handful of big games every decade, plotting out a single circle of League of Legends and overlapping it with the new games, forming a Venn diagram.

Europe, South East Asia, and the CIS region all have one thing in common: the top teams flourish while the rest suffer. You have the big boys of each region — Team Liquid, Team Secret, Virtus.pro, and Fnatic — whose fan base expects a top finish at every event. The rest of the teams struggle near the bottom of every tournament. The hope was that the DPC system could bridge these gaps but it had the opposite effect. The top teams didn’t have to go through qualifiers for events and thus never got to teach the others a lesson. So going into The International 2018, the divide is more visible than ever. Three of the teams are favourites while the others would be happy with a top 8 finish.

Earlier today, Valve officially released the new Panorama UI, which was previously only available via a beta opt-in process. The brand new interface has been in the works for several years, finally hitting the live servers to the excitement of the CS:GO community.

In addition to Panorama, Valve unveiled a brand new “Horizon” case, featuring brand new skin weapons for various weaponry, including the AK-47, Desert Eagle and AWP, among others. Furthermore, four new knife models have been implemented into the game.

EU Masters Season 2 announced together with another €150,000 prize pool

ESL announced that the second season of EU Masters is a month away from now. The organization is once again putting €150,000 on the line for the worthiest regional teams in League of Legends.

To qualify for the 16-team main event, teams will be pulled from different European regions and put through several rounds of qualifications before reaching the group stage of EU Masters. Once the main event begins, four groups of four teams will be formed, with top 2 of each advancing to compete for the bulk of the prize pool in the playoffs.

Last season ESL received a lot of criticisms for the formats their events used. Their last event of the season — ESL One Birmingham — received the most flack and at least one team declined to go due to the poor format.

In order to rectify their previous mistake, ESL held meetings with team representatives during ESL One Birmingham and even put out a tweet asking the Dota 2 community for their opinion.