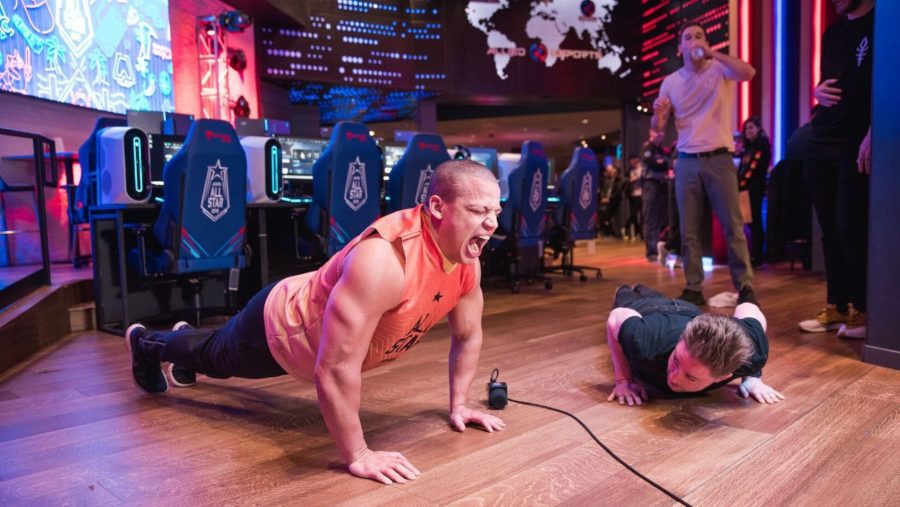 From permaban to poster boy, Tyler1’s TCS is a League of Legends staple

December used to be the one month of the year where the world’s largest competitive game, League of Legends, had time to rest. With the close of the world championship and frenzy of free agency came the peaceful winter nights of the preseason, where amateur and pro players alike cruise through the holidays by tinkering with the gameplay changes. It was a period of reflection and rest for the western region, the one time of year where the front of Twitch and YouTube aren’t plastered with League of Legends tournaments commentated in a dozen different languages.

That was before Tyler “Tyler1” Steinkamp decided to take matters into his own hands.

Part-entertainer, part-entrepreneur and part-bodybuilder/aspiring No. 1 on the North American League of Legends online ladder, Tyler1 has gone from pariah to poster boy for Riot Games in less than two years. After having his indefinite ban lifted at the beginning of 2018, the popular Twitch streamer has become one of the game’s staples in promoting the game. Most recently the 24-year-old was featured prominently during their All-Star event in Las Vegas.

A month prior to his release from the Riot penitentiary, though, Tyler1 found a way to incorporate League of Legends into his streams without breaking any rules of actually playing the game. This was the birth of the Tyler1 Championship Series, a parody of Riot’s premier North American domestic competition, the League Championship Series. Where the LCS had millions of dollars behind it, a decked out reconfigured television studio to broadcast from and hundreds of live fans watching the best in the country play, Tyler1 had his usual streaming equipment and a greenscreen.

In the tournament’s inaugural run, MLGB E-SPORTS CLUB (yes, the capitalization is important) defeated Meme Stream Team, a squad featuring former pros, to win the grand prize of $10,000. The losers? They got nothing. Tyler1’s prize pool was do-or-die. You either win and get everything, or you lose and you get nothing. That’s how he does things. If it’s not all-in, it’s a waste of time.

Although he was free to play the game in 2018, the tournament’s popularity warranted a sequel, second annual TCS even grander than the first. While Tyler1 kept the greenscreen and humorous touch that made the first event so successful, he bumped up the theatrics in the second go-around, first by raising the prize pool to $50,000 (with the runner-up still walking away with the hefty bag of $0) and then adding secondary casters from the world of gaming to commentate the qualifying rounds.

What began as a joke with Tyler1 standing next to a stock photo of LCS commentators during the first TCS became reality when some of the bigger names in the League of Legends joined him to put on what would, once again, be one of the most-watched non-Riot produced events of the year.

In 2019, Tyler1 has found his groove. He’s kept the $50,000 prize pool and sink-or-swim prize pool payout and continued his inclusion of the many faces in the League of Legends community, this year even having three-time NBA champion Rick Fox commentating an opening round matchup.

“I loved supporting Tyler1 and his TCS,” Fox told ESPN. “[Clayton “Captain Flowers” Raines] and [Isaac “Azael” Cummings] have nothing to be worried about, in no way am I coming for their jobs as a caster, but I had a blast working with Moe and casting the Maryville University VS Redmercy [Turning] 30 series!”

At a time where North America doesn’t have a lot to look forward to when it comes to professional League of Legends, not a single team from the region making it past the group stage at the most-recent world championship, the TCS is shining a light on the players that need it most in the region. Though there are some pros in the tournament, the majority of the population is amateurs and minor league players, each looking for an opportunity to grab someone’s attention on a pro team to maybe give them that one shot to elongate their career for at least for a few more months.

As things are now in the region, it’s a wiser decision to follow in the footsteps of Tyler1 and become a streamer than it is to try and become the next great LCS pro player. In the upcoming spring season of the LCS, half of the starters in the league will be from outside the United States or Canada, with only one mid laner, Greyson “Goldenglue” Gilmer of the Golden Guardians, not having originally been imported from another region. For the players in the TCS, the amateur scene and even the official Riot-produced minor league, the Academy system, every chance to make a name for yourself in front of a large audience is one that can’t be overlooked.

While he was banned from playing, Tyler1 continued to stream, including hosting his own game called the Tyler1 Championship Series where he superimposed himself on a casting desk. Twitch.tv

“I think that during the offseason, amateur hosted tournaments by Riot where both LCS and Academy players could compete would be immaculate for NA talent growth,” Mo “Revenge” Kaddoura, a member of Team E Turner, one of the 2019 TCS finalists, told ESPN. “The offseason start for summer split is way too long, and not enough pros use that time to actually practice in NA solo [queue] which is hurting any of our growing talent. These tournaments will hopefully be an incentive for more pros to practice with homegrown talent and give them a way to show their skill.”

Revenge, a top prospect for years on the online server, actually deterred from going pro in 2017, instead, announcing he would be focusing on going to school in hopes of becoming a surgeon. Recently, he’s changed his position on becoming a pro in the tumultuous North American scene, joining LCS franchise FlyQuest’s Academy roster in pursuit of making a starting roster in the near future.

“I like the prize pool being all or nothing, it just makes your will to win a lot stronger,” Kristopher “Fragas” Myhal, the leader of Revenge’s opponent in the final, Fragas’ Baby Yodas, said. “I think more amateur tournaments should do this, it could motivate a lot more players to take League of Legends seriously in NA. At the end of the day, I don’t care about the money. I don’t want to win for myself, I really wanna win for Fallen Bandit, Auto, and Poome [because] they deserve more credit than they are given. They are great players and definitely deserve to be on any Academy team.”

In a way, it feels as if there needs to be reasons why players growing up in the United States and Canada should go pro nowadays. While League of Legends is still one of the most popular games in North America, a lot of the younger talent has gone down the route of playing console games or hitched their wagon to Fortnite, with 16-year-old Kyle “Bugha” Giersdorf of Pennsylvania as reigning world champion. It’s cool to be a Fortnite pro. Being a streamer on Twitch or Youtube is cool. For a majority of the year, playing in the dregs of the North American Academy or amateur scene? Not glamorous, and usually ends with little to no progression.

With the TCS, however, it’s motivation. The qualifiers up to the finals have been some of the biggest streams on Twitch during the usually slow month of December, with it even peaking over 90,000 viewers in thanks to commentary from the likes of popular former Overwatch pro-turned-variety streamer Félix “xQc” Lengyel. For the one time a year, all eyes are on the budding domestic talent the North American League of Legends server has to offer, and it’s thanks to a man that started it all with only three things: an indefinite ban, a green screen, and a dream.

“As for the entrepreneur approach of Tyler1, I support building your own way and he has inspired me to think of ways of creating my own celebration of League of Legends for the GenX and Boomer Community of League,” Fox said. “Rules [are] you have to be 30 and over to participate.”