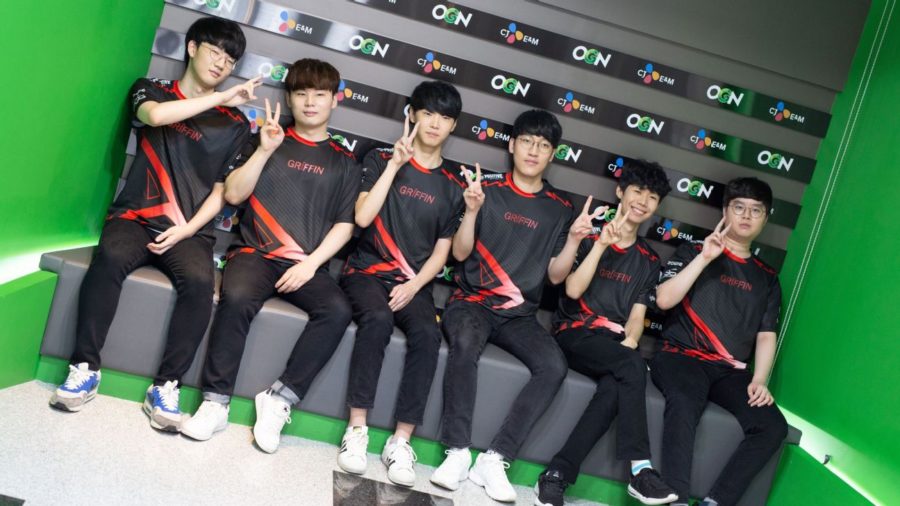 He paced behind his players as they set up in their booth. When it came time to step onstage for a pre-match broadcast interview, cvMax rocked back and forth on his heels a bit. Next to him, Starcraft legend and Afreeca Freecs coach Choi “iloveoov” Yeon-sung beamed, towering over him in a well-cut suit.

cvMax’s voice was soft, and his eyes shifted nervously. He deflected the idea that his team could, in fact, walk the Royal Road — to be a rookie team that, in its first season, wins a title. The coach drifted from answering whether his squad could go from League of Legends Champions Korea rookies to LCK Summer Split champions, instead focusing on the team’s internal preparation.

“I think we were just trying to play to how we practiced,” cvMax said. “That will provide us with the results that we’re wanting.”

To their credit, the members of Griffin were calm, joking with each other before the match or wordlessly preparing their peripherals in the booth. They paid no mind to the media snapping photos before the matches and exuded confidence while they set up to take on Afreeca for the chance to face KT Rolster in the upcoming summer finals.

OGN’s introductory videos always tell a story. In the opening for the LCK Summer Split, which was displayed on a large screen before Griffin’s playoff match against Afreeca, Griffin bot laner Park “Viper” Do-hyeon approached members of all the other LCK contenders. They stood in a line, waiting for him. The message was clear: Viper, and all of Griffin, would have to go through them to make that Royal Road happen.

To everyone’s surprise, except the six members of Griffin themselves, the rookie squad did it. Griffin is in the LCK finals, where it will face KT Rolster at 4 a.m. ET on Sept. 8. Unlike his coach’s prematch humility, after the match, there was no hesitation in Viper’s voice when he said that they had fully expected to be in the finals.

“Yeah,” he said immediately. “I thought that we could go to the final and World Championship.”

From another player, or another team, this would sound arrogant. But Viper and his teammates are anything but arrogant. After his post-match interview Viper sat in the hallway next to the OGN studio, smiling brightly. When Griffin wins, the players bask in their victory a bit more than most other teams. This feeling is still fresh to them. But the desire to get that win never affects their nerves onstage, which appear nonexistent.

To watch Griffin is to watch a group of players who are all remarkably talented at League of Legends realize that they’re just that talented in real time.

Griffin burst onto the LCK scene thanks to the team’s excellent 5-on-5 teamfighting. Even if one or multiple members of Griffin slipped up early, their teammates always had their back. They could make it up through teamfighting, and often did, including the team’s 3-2 victory over Afreeca that night.

The members of Griffin all possess a self-confidence that translates into team confidence. Regardless of who starts — Griffin occasionally swap between the team’s two mid laners, Jeong “Chovy” Ji-hoon and Shin “Rather” Hyeong-seop — Griffin has the motto “five as one.” The team’s staff wears t-shirts that tout this message on the back, and Griffin espouse this attitude in every game.

Griffin started its first-ever LCK split with a fairly easy schedule. This schedule benefitted Griffin because it allowed them to improve over the first two weeks in a new, volatile meta, to the point where the team could take on some of the best teams that the LCK had to offer.

It wasn’t until Week 3, when Griffin defeated Kingzone DragonX, that fans and analysts outside of the team truly began to believe in the rookies. Much of this had to do with Viper’s remarkable transition from the scaling hyper-carries he played in Challengers Korea to mages and bruisers in the bottom lane. Griffin became one of the best teams in the LCK at running funnel compositions, too, and Viper became known for his ability to play anything, including a surprise Teemo pick.

The transition, he admitted, did not come easily. He still feels out of his comfort zone at times, but Viper’s ability to diversify his champion pool has been key to Griffin’s success.

Thanks to Viper’s flexibility, Griffin showcased a variety of different compositions and playstyles, all making the most of the team’s superior teamfighting. There was only one team that Griffin couldn’t defeat this season: the team’s upcoming finals opponent, KT Rolster.

“It’s not even KT,” Viper said emphatically. He and his teammates don’t believe Griffin’s losses to KT are a result of KT having a special solution to defeating them. “All of their lanes are strong. They push all of the lanes; it’s just that.”

That’s KT’s strength in his mind. But Viper asserts that the losses were all due to Griffin’s mistakes, not KT’s execution. In order to defeat KT, Griffin just needs to do what the team has done to get into the finals in the first place: Play to its own strengths and lean on its teamfighting.

“We just need to do what we can do best and don’t mind KT,” Viper said. “If we go to the final and just play well, we will show many fans that we can win.”