Each of the Overwatch League’s teams has two jersey options: home and away. Home jerseys are bright and bold in color, highlighting each teams’ primary colors. Away jerseys use white as the main color, using each teams’ primary colors as a secondary accent. Despite the color differences, these jerseys all follow the same design cues — a large logo on the chest, player names on the back, and numbers on the sleeve.

“We worked with our teams to create some one-of-a-kind designs that are designed by the teams, that break the mold of the jersey that we’ve had over the first two season of the league,” Overwatch League head of esports licensing Daniel Siegel told Heroes Never Die. “They will be truly authentic in the sense that these jerseys have been designed by the teams … [and] that the fans will have an opportunity to buy by what they see on they see on stream — exactly what the players are wearing.”

Siegal said that teams used the new jersey designs to create new looks that pull elements of inspiration from the cities that they’re representing in the Overwatch League. The Overwatch League itself is a global, city-based league, and next year, it’s moving to the home-and-away format. Teams will operate out of home arenas spread across the globe. The third option jerseys are a new way for fans to interact with the city-based franchises in ways that reflect the individual teams and their locations.

The jerseys are all still distinctly Overwatch League jerseys. Many teams chose to keep the familiar look of player tags on the shoulder and kept the font for player names and numbers on the back. Likewise, no team has wildly altered their logo. But there were no real design notes that the teams were required to hit with the designs. “I’m really happy and excited we told [the teams] to go crazy,” Siegal said. “Our jerseys in the last seasons had a very distinct and consistent look.” These still have that distinct look, but iterate on the format in a way that feels fresh and “breaks the mold,” he added.

Each of the teams had a different process and approach to the third jerseys. For instance, for the Florida Mayhem, the third jersey look a fan-favorite style — a Miami Vice colorway with a neon logo — that it’s been using in various social media campaigns for a while. It’s a style fans of Florida already love. (Hangzhou Spark took on a similar color scheme — which is basically already these two colors — and London Spitfire decided to go pink and blue, too. 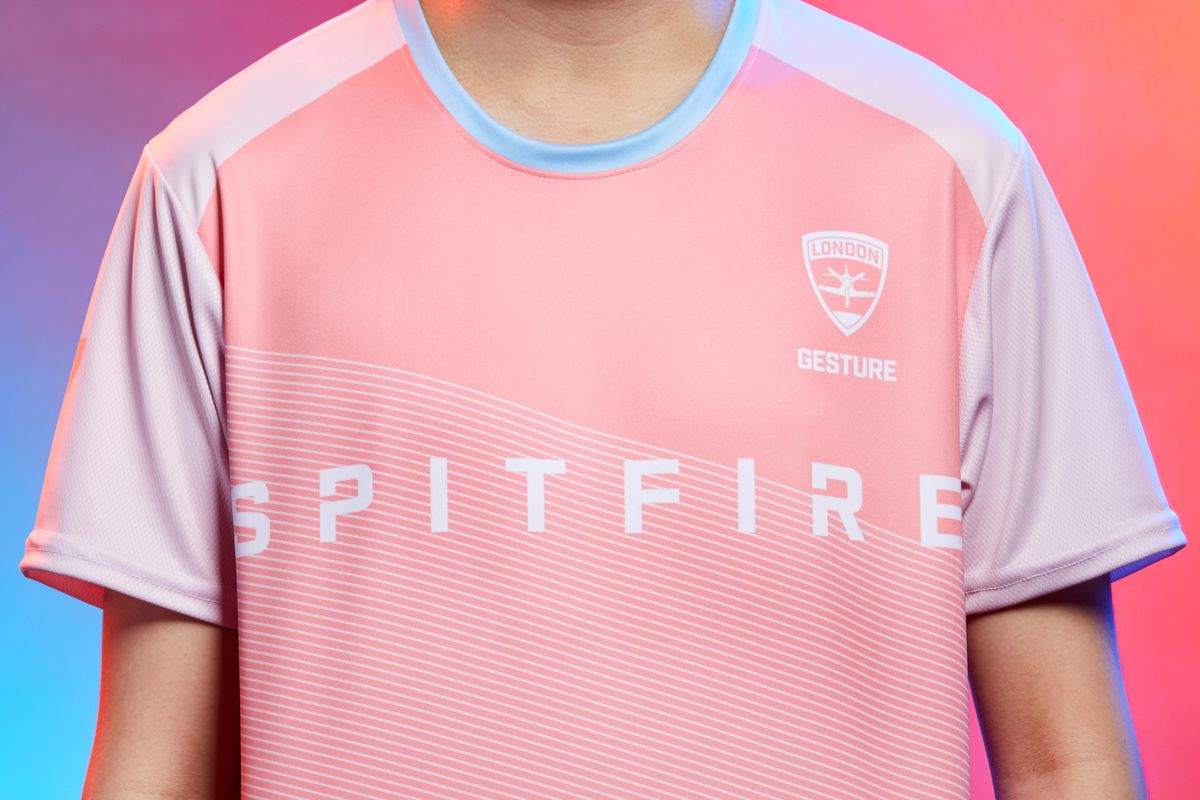 But for London, it’s a much more muted colorway, the perfect pale pink. And to that, we say: Finally! More pink!) And then there’s Philadelphia Fusion that kept its classic logo and added referee stripes. For Houston Outlaws, their new jersey, the “Retro Colt,” is a “refreshed take on one of the traditional sports’ most iconic uniforms,” which is an homage to the iconic Houston Astros jersey. “It aims to deliver a vibrant and fun visual statement for fans that is ‘bigger than Dallas,’” John Williams, OpTic Gaming’s senior graphic designer, told Heroes Never Die.

And, indeed, Houston’s logo is big — certainly bigger than the logo on Dallas Fuel’s new jersey. (Dallas Fuel’s is essentially a simpler, darker version of its original jersey.) Houston’s gun/steer skull logo is massive, topped by a big black star, and emblazoned on the team’s signature bright green colors.

New York Excelsior vice president of consumer product and merchandising told Heroes Never Die that the team’s jersey is centered on its iconic flag, which has been “a statement” since the team’s inception. The design is not wildly different from the original, but the design team made an intentional decision to do it that way, drawing inspiration from New York, “where our closet is full of black and white,” Gangemi said. (The jersey trades in NYXL’s blues for black.) “Conveying strength, sky-high ambition, and glittering optimism, art deco designs are signature hallmarks of our city,” she said. “The third jersey celebrates an iconic New York landmark with an art deco stencil back design. (Instead of the regular logo, NYXL uses a version that’s got the skyline peeking through.)

Toronto Defiant’s approach to the new jersey is the opposite: The team’s chosen to keep the colorway of black and red, but switched out the prominent logo for an eye-catching new feature. OverActive Media vice president of content and communications wanted to celebrate the diversity of its city by highlighting language. “Toronto is a scale model of the rest of the world. No matter where you are in our city, you can walk along any street and hear multiple languages,” Senra said. “For a lot of us, experiencing those sounds — the coming together of languages, has become our city’s unofficial anthem.” 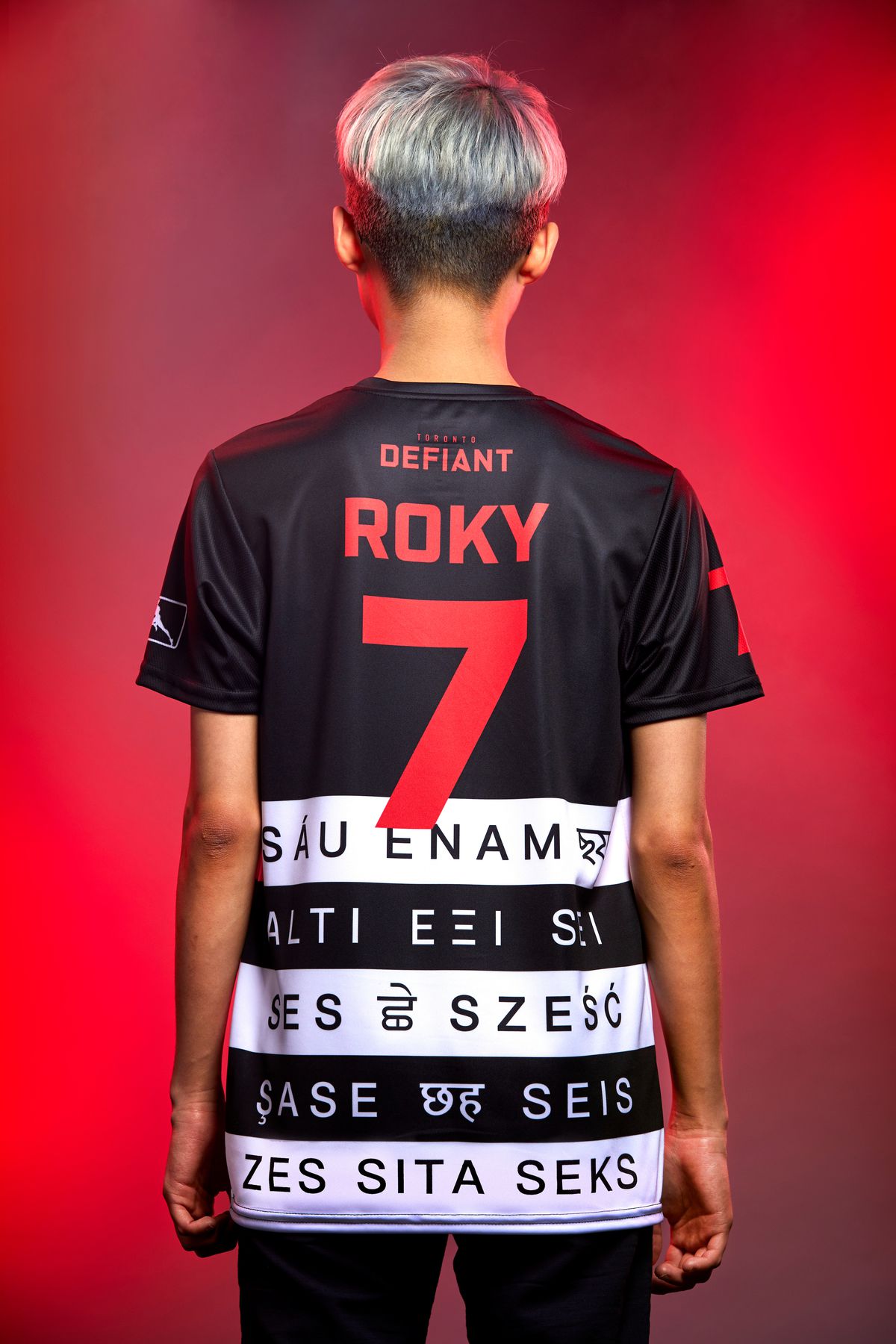 Working with Diamond Marketing to create the third jersey. Translations of “six” are prominently featured in stripes that cover two-thirds of the jersey, with a small Toronto Defiant logo in the corner. The rest of the jersey follows pretty consistently in the traditional Overwatch League style. It makes a statement, both visually and metaphorically. (Six is apparently Toronto’s favorite number, thanks to a Drake album called Views, which was originally titled Views from the six. Toronto’s area code is 416, Drake told late-night host Jimmy Fallon in 2016. He shorted it to six, and thus created a new nickname — and favorite number — for the city.)

“Considering some of the scary divisions happening globally right now, putting 30 different languages on the same jersey, and given them all equal importance is our way of responding,” Senra said. “We are proudly articulating that our differences are what binds us. It’s our love letter to Toronto.”

The first of the Overwatch League third jerseys was debuted with the league’s stage three kick-off on June 6. The rest of the jerseys will be debuted at select games throughout the rest of the season. (Except for Guangzhou Charge, Shanghai Dragons, Seoul Dynasty, Chengdu Hunters, and Vancouver Titans, which are the five leftover teams that won’t be wearing fun jerseys.) Fans will be able to buy the third kit jerseys on the Fanatics Overwatch League website. They’re up on the Overwatch League Fanatics site now for $99, though there have been a few gaffes: London Spitfire’s jersey for Kim “birdring” Ji-hyeok originally spelled the player’s tag wrong — as “birding” — and has since been taken down.