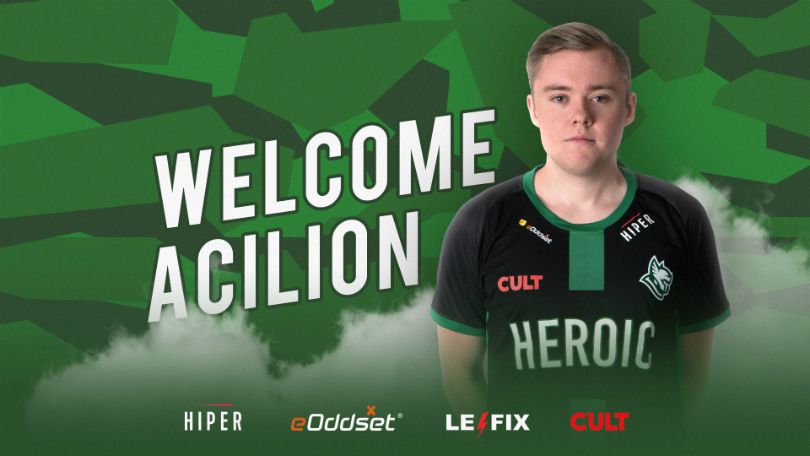 Heroic part ways with RUBINO, bring AcilioN on board | News

Earlier today it was revealed that Danish organisation Heroic parted ways with its only non-Danish CS:GO pro, Ruben “RUBINO” Villaroel. The Norwegian joined Heroic back in February, assisting the team at various international LAN events, including Copenhagen Games 2018 and GG:Origin, where Heroic secured second place. After playing alongside his teammates for three months, Villaroel contracted an eye infection that put him out of commission until May 30th.

Upon his return, the team participated at the CAC 2018, where they secured third, as well multiple online qualifiers for premium events. Unfortunately for the team the results were not what they had hoped for, as in neither of the qualifiers were they able to secure a spot at the LAN finals.

Upon joining the roster, Larsen expressed that he looks forward to playing alongside his brand new team:

Having finished my first day in the amazing office surroundings, I must say, I really look forward to playing with the Heroic team. I really had no doubt, when I was first contacted by the RFRSH organization and talking to MODDII, the player-coach, and introduced to their way of working, the facilities and the ambitions only confirmed my initial feelings.

Dreamhack Valencia will be our first tournament, and I can’t wait to pull the shirt over my head and play with the guys as an official Heroic-player. On Imperial, we beat them at Copenhagen Games, but this team and organization is so much bigger, and I am just proud to be a part of it all.

The full-Danish roster will debut at the DreamHack Open Valencia 2018 event, taking place on Jul. 12-15. Eight teams from across the world will duke it out for $100,000 in przie money.  Heroic will  face off against Polish side AGO Esports in their opening match.