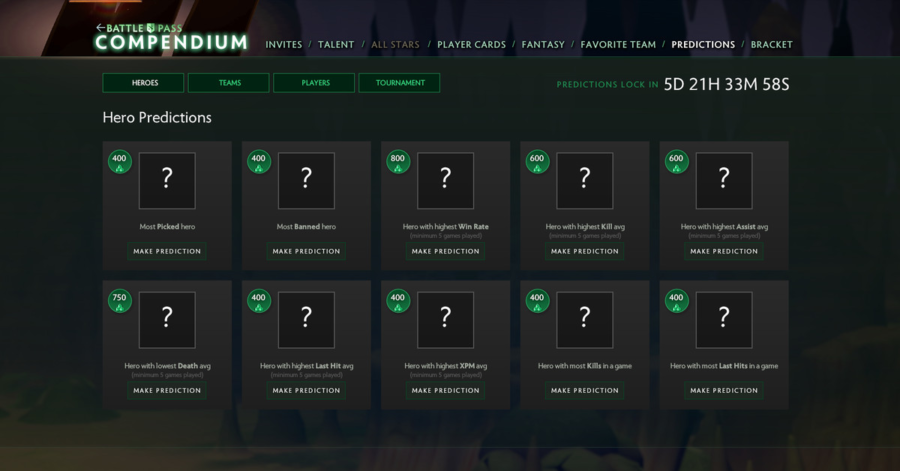 How to make Compendium predictions for The International 8

Everyone has something to say about The International each year, from analysts to the teams themselves and even the panelists at the event itself. But if you want to give it ago, the annual Compendium gives you that opportunity.

If you so choose, you have an opportunity to make a variety of predictions about this year’s The International tournament, from “Hero with highest assist average” to “Total heroes banned” and even “Player with the most kills in a game.”

Or, if you’re feeling bold, once the full event bracket is released after group stages, you can predict how it’ll play out. Perfect predictions are nearly impossible, though — last year, the Dota 2 team announced that, over halfway through, only one person had correctly predicted the bracket up to that point. They will reportedly be a VIP at this year’s event.

If you think you have what it takes to reach that level of predictions, pick up your Battle Pass and get picking. Having trouble getting there? We’re here to help.

If you’re absolutely sure Techies will be the most-picked hero or that your region’s top seed will take it all, you can now make predictions to put your Battle Points where your mouth is.

Open up your Battle Pass and go to the Compendium section:

When that’s open, you’ll land on this page — click “Predictions” on the upper tab: 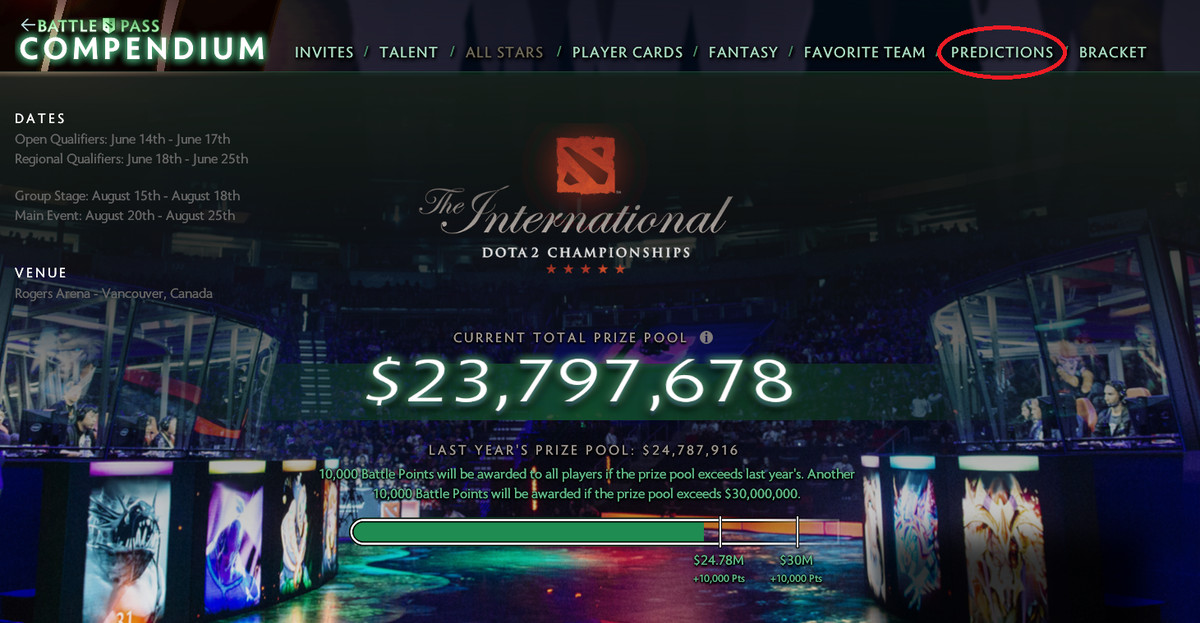 And you should land on this page:

From here, you can navigate the different types of predictions you can make, along with the corresponding winnings you’ll receive if you get them correct.

When the group stages are all said and done, the teams will fall into place in the main event bracket. Once this happens, you’ll get a chance to predict which teams are going to take out which.

It’s pretty straightforward to get there, even if it’s not set up yet. (You’ll see what I mean.)

Like for Predictions, open up your Battle Pass and find the Compendium tab:

This time, you won’t want to go to “Predictions,” but instead “Bracket”: 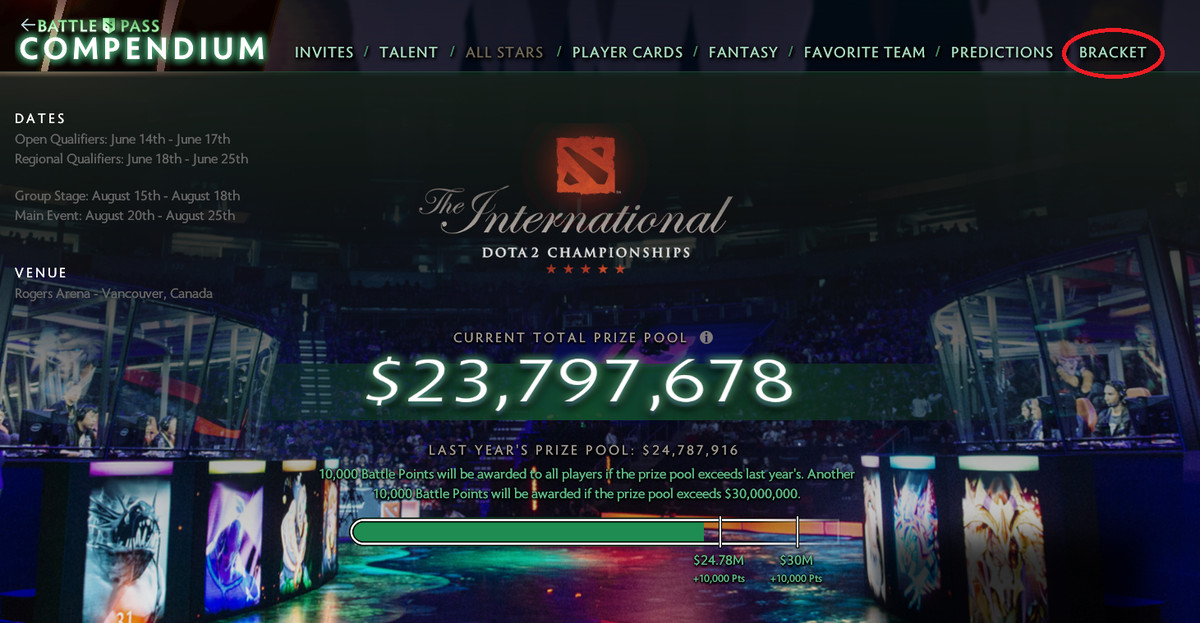 And then you’ll land here: 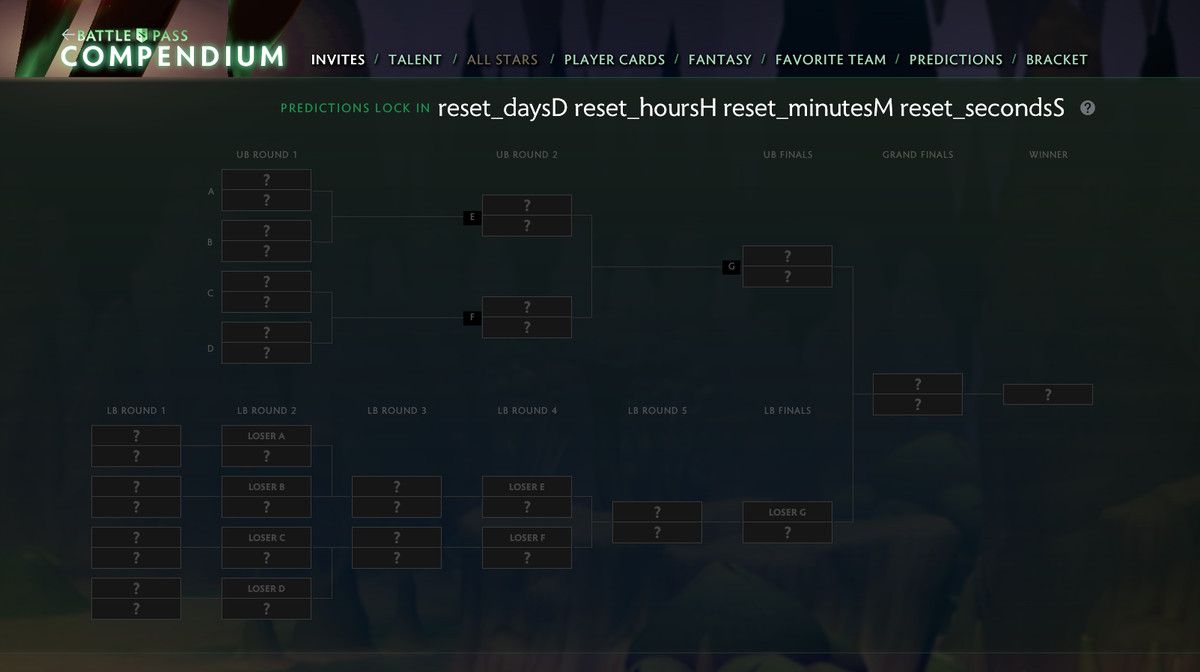 So it’s a little broken right now, but we won’t need this page until Saturday, August 18 anyway, when the group stages end and the bracket is set up. When it does happen, though, best of luck!