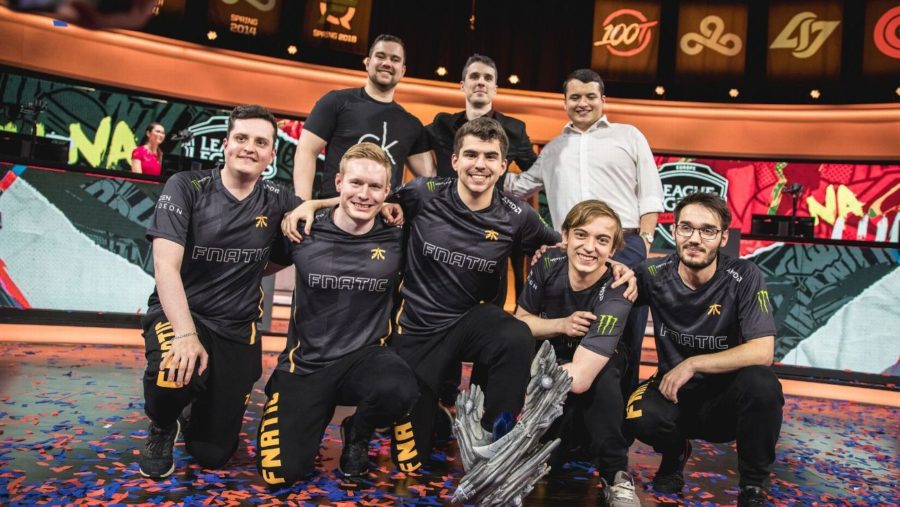 “I feel like we have a lot of individually strong mechanical players and we’re not scared to fight.”

Due to roster changes and a massive shift in the League of Legends meta prior to the summer split, this year’s NA vs. EU Rift Rivals tournament was more of a large practice stage than the more serious tournament in Dalian, China between the LoL Master Series, LoL Champions Korea, and the victorious LoL Pro League. In 2017, North America’s Team SoloMid, Cloud9 and Phoenix1 surprised Europe’s G2 Esports, Fnatic, and Unicorns of Love with strong mid/jungle control. With a much wider pool of champions to choose from, and a variety of viable gameplay styles, some western teams like Echo Fox approached Rift Rivals as a small international sandbox, where others used the tournament to test out a new roster iteration, like 100 Thieves.

The idea of Fnatic — the “first” European League of Legends team, Season 1 champions, the default European organization — has often been a larger-than-life shadow cast over the team itself. At times, it has also been its narrative weapon. Due to some unseen prestige that comes with a veteran organization, or the existence of legacy players like top laner Paul “sOAZ” Boyer still on the lineup, Fnatic has always persevered, even when little to nothing was expected of the team.

It was fitting for Fnatic to deliver the final blow to North America with a Game 4 victory over Echo Fox. Every European team did their part, including Splyce, whose first tournament win came in the finals relay, but Fnatic approached this tournament with a clear team goal in mind, separate from the EU/NA rivalry.

“We had a team discussion before the tournament with our sports psychologist about goals and things like this,” sOAZ said. “I was saying for myself, my goal is not to have a top two, top four or these kind of things, my goal is to have a good process going into Worlds. Because with all of the teams that I’ve played on, there’s a lot of difficulties and issues with Worlds. Basically we are trying to use Rift Rivals to have a good process going into the summer split or Worlds.”

On May 18, 2018, Fnatic lost to China’s Royal Never Give Up in the 2018 Mid-Season Invitational semifinals. It was hardly an embarrassing loss for Fnatic. After a shaky 4-6 group stage showing, Fnatic was not expected to win the series, and lost to the eventual MSI champions in RNG. Yet, for the Fnatic players, the loss weighs on them along with the team’s overall MSI performance.

“Had we played a little better, a little smarter, I feel that we could have taken that series home,” Bwipo said, shaking his head slightly. He described the 2018 EU LCS Spring Finals as the last time that Fnatic precisely executed a game plan at the desired high level that the Fnatic players demand of themselves. At the time, Fnatic’s strategy revolved around AD carry Martin “Rekkles” Larsson and his Tristana.

“I can just imagine that G2 felt like they had no hope playing against us because we had such a solid drafting plan even though the draft itself might not have been good,” Bwipo said, reminiscing about the EU LCS Finals. “At the end of the day what mattered is that we drafted to our strengths and executed. And I feel like that’s something we messed up at MSI. That’s something that we mess up still. If you’re the best in the World at following your plan, it’s difficult to beat even if the other team knows what to do.

“Coming into Rift Rivals I feel like we’re sticking with what works for us,” Bwipo said. “But we need a few more clarifications in the team to confidently go into the draft knowing our priorities.”

After Fnatic’s MSI defeat, the team was hit hard by the 8.11 patch changes. Fnatic had already shifted the team’s playstyle at MSI to revolve more around mid laner Rasmus “Caps” Winther’s side lane pressure, but the mid-season patch updates thoroughly dismantled Fnatic’s bot-focused strategy. The team had committed to improving communication and macro basics during the mid-season break, but this plan was put on hold once the patch changes hit. After trying out Janna and Karma in the first week of 2018 EU LCS Summer, Rekkles stepped down from the starting AD carry position, allowing the team to flex around Bwipo and sOAZ, depending on champion. This was a dramatic departure from how Fnatic had played for years. Fnatic’s players are still learning about themselves and how they want to play the game.

“Since the game changed a lot it was harder to talk out communication. Most of the games in Europe are over by minute ten, fifteen, it’s fairly hard to work on what I thought was basic from what the game was before,” sOAZ said. “So I would say that it’s not improved compared to before, but it’s due to the other game changes. For coming to Rift Rivals, we want to improve the outside part of the game, how we have our discussions, coaching, conflicts with players after the games, things like this. It’s as important as the game.”

“It’s kind of difficult to say since we’re a team very much dependent on emotions,” Bwipo said of whether the team had improved or not. “I think if the emotions are very strong and people are feeling really good about the draft, how we’re playing the game, how we’re communicating, we’re probably a lot better than what we’re showing right now.”

While other teams entered Rift Rivals ready to test out experimental compositions, a different playstyle, or a different roster iteration, Fnatic used it as a dry run or dress rehearsal for a possible Worlds bid, focusing on everything from out-of-game preparation, practice, and communication. Results aren’t the only indicator of improvement, but Fnatic’s 4-1 tournament record and 2-0 finals day are a good start for the team, even if the players themselves are still looking ahead towards further improvement. Taking the idea of a “team color” or specific style of a team to its most literal interpretation, Bwipo summed up Fnatic’s strengths with the color orange, a Fnatic brand staple since Season 1.

“I think orange is a good color for Fnatic,” he said, smiling. “It’s bright. It’s up in your face. It wants to show off. I feel like we have a lot of individually strong mechanical players and we’re not scared to fight. And we’ll fight whatever the circumstances are and that’s something that bit us in the a** against Team Liquid. If we can fix that I think yeah, orange is the best color for Fnatic.”