I love Overwatch, and it’s all thanks to this stupid hamster

Hammond. Wrecking Ball. Or, my personal favorite, just Ball. The Overwatch hamster goes by many names, but I only know him as the hero who reignited my love for the game. When I say hero, you might think I am referring to the term used for every character in Overwatch. That would be incorrect, because Hammond is my personal hero.

My love for Ball began on Reddit (which… probably is not the first time I’ve typed out that phrase.) As a rooting, tooting, hardcore gamer in the business of writing, I often find myself perusing the ol’ r/Overwatch for juicy content. It was on one fateful day in May, when it happened. I had no idea my life was about to be changed forever.

“Y’ALL MIND IF I HAMMOND?” was the name of the video that altered my fate. I don’t remember why I clicked it. Usually, I avoided Reddit highlight reels, as they all just sort of blended together after a while. This one, though? It called to me. Like Gandalf being called into Frodo’s tiny hut in The Shire, I could feel the destiny awaiting me on the other side of that play button. Here’s the video, for your viewing pleasure.

Every time I watched Wrecking Ball zip and zoom into a team, knock ‘em up, and then insta-kill swaths of enemies with his ultimate, my heart skipped a beat. I had been playing Overwatch since its open beta in 2016, but I was on a hiatus from playing. I had never had the chance to try Wrecking Ball for myself. Why exactly did he look so fun, though? Was it the music in the video? Was it the jump cuts? Perhaps it was the player’s innate talent.

Could have been any of those things, really, but that didn’t matter to me. I just knew I had a need to Wrecking Ball.

I queued up for Competitive, like your favorite random teammate ever, and locked in the ball for the first time ever. At the time, I had no idea what his abilities were. I saw the person in the video use them, but I didn’t know which key did what, or what the implications of each were. But nonetheless, I was hooked. He was fast. Faster than anything I’ve ever seen. (That’s a tasteful Skyrim reference for all you real gamers out there.)

I began playing him in every single game. I held no respect or regard for “team comps.” I ignored the pleas of my teammates to play a different tank or to leave the game altogether. I was in love with this ball, and no one could take that away from me. Something about the way he skated into enemy teams, roped like Spider-Man to wall corners and overhangs, and then bopped unsuspecting squishies on the head with his rumpus bottom was exactly what I had been waiting for.

Full disclosure: I was nothing like MineRocker, the YouTube channel that created the inspirational ball montage. They are good at Hammond. I, however, am not. It took me over 20 games just to figure out that I could hit Ctrl in mid-air to do the butt-slam. Not to mention, I call it a butt-slam because I don’t know what the actual ability name is, even after all this time.

As someone who typically cares way too much about competitive games, someone who spends thousands of hours grinding ranked queues and learning new techniques, this type of carefree “I don’t care how quickly I learn as long as I’m ball” mentality was liberating to me. It was a spiritual experience, and it changed me at my core.

Once upon a time, I raged at teammates for “inting” my games. Once, I would get angry if I placed lower than a Platinum rank after placement games in either Overwatch or League of Legends. Now, though? Now, I ball. I’ve learned what this “fun” feeling is in video games that so many people talk about.

It’s not quite as fun for my friends, though. Every game starts out with me saying “I have a need…” followed by the groans from my party members.

They’ll plead with me not to finish the statement. They’ll beg me not to lock in the ball, but it’s always futile. They know what I’m about to do, because I do it every single game.

“…For speed.” I finish the statement proudly. Then, I take my ball, and I gleefully roll off into the horizon. If I am a madman, at least I’m a happy one.

Am I saying that Hammond is the magic solution to anyone that finds themselves taking Overwatch too seriously? No, the moral of the story is to just do whatever you find fun. Follow your dreams and all that.

I just happen to find playing Hammond, even if I do so poorly, very, very fun. 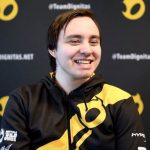