If you’re a betting kind of person, you might think that means we’re getting a McCree cinematic. If you fear to commit to such a heady expectation, you might think that the banner is simply celebrating one of Overwatch’s most iconic heroes (and Matthew Mercer deserves the appreciation — the man is a gem.) Either way, the more I play Overwatch, the more I come to appreciate McCree. Is he kind of a silly character? Sure, but that’s part of the charm. In some ways, he represents the best of Overwatch’s setting, and the potential best of the relaunched organization Overwatch in the game’s fictional world.

Jesse McCree had it rough. The young man was part of the weapons smugglers and wanted criminals known as the Deadlock Gang, and when he was busted by Overwatch, he ended up somewhere nearly as bad: Blackwatch. Gabriel Reyes took McCree under his wing, and the two of them worked closely together. McCree was loyal to Blackwatch to the core, but he’s the character who had the most cross-over with the main organization of Overwatch. We know that he was close with Ana Amari, who helped him with his aim; he was kind to Amari’s daughter as well. Pharah and McCree have more than a few lines that suggest the two of them have an almost sibling-like relationship where they played soldier together.

While Moira hung out in her labs and Genji stressed about the nature of his synthetic body, McCree was a fundamentally decent dude who found himself constantly thrown into bad situations, but the kindness it takes to regularly play with the young daughter of someone who isn’t your commanding officer is notable. It’s that sense of decency that shines through in McCree, even as he rolls around with a metal arm adorned with a spooky skull on it.

In the Retribution comic, McCree is ready to go in and shoot the target nice and simple. He’s mad, he’s riled up and he immediately reaches to the easiest solution from the safety of Overwatch HQ. Once they’re in the situation, though, it’s Reyes who pulls the trigger, and McCree gives him shit about going for easy retribution over proper justice.

Overwatch reminds us that the world could always use more heroes, and McCree is the invert of a guy like Jack Morrison — he started from a rough and tumble bottom, and is striving to do better, while Morrison fell from grace and is now rolling around in the moral mud, giving entirely in to his own sadness and anger over the end of Overwatch.

Speaking of Jack Morrison, Soldier 76 and Ana are both traveling around the world with the world-changing goal of stopping Reaper and Talon, and solving the mystery about what happened to old Overwatch. That’s a big picture goal, and while Ana smooths over some of 76’s rough edges, the two of them are removed from the concerns of little people.

In Hero, 76 saves Alejandra out of muscle memory. The rest of his screen time is all about grimacing, being dour, and beating up gang members. Meanwhile, in the comic Trainhopper, McCree acts in direct defense of civilians to the point where he hands a glowing, mysterious, undoubtedly important cube over to Talon so he can keep the terrorized train passengers safe. 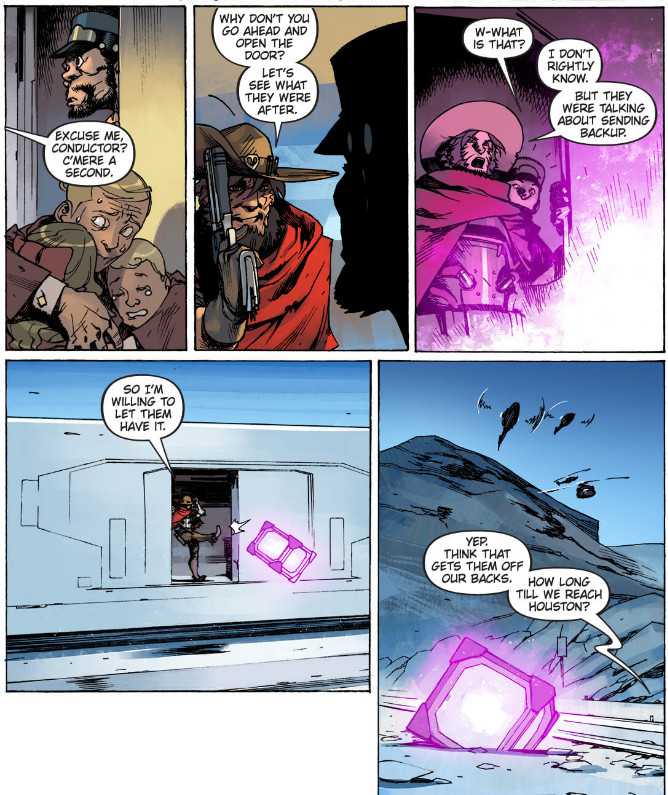 The train passengers can do nothing for McCree. All they can tangibly reward him with is a head start from the cops that are incoming to take him out. Yet he still puts their safety over the vague greater good and moves on.

Despite all of the above, McCree isn’t perfect. He dresses up like a cowboy in the future year of 2076, and looks more out of place and anachronistic than the time traveller and the cryogenically frozen survivor. We find out through an interaction that he ruined cowboy movies for Jack Morrison, one of the few pleasures enjoyed by an extremely stressed soldier. We know he drinks… a lot.

Hilariously enough, there’s a very viable fan theory that McCree also pays the bills with a cover identity: Joel Morricone is a dramatic, cowboy loving “guest blogger, coffee drinker, white hat wearer, pundit for hire” who writes about how cool and useful Jesse McCree is. Not only do the two men share initials, but Morricone is a famous composer who scored tons of Westerns, including The Good, the Bad, and the Ugly.

This would explain why Sombra teasingly calls Jesse “Joel”, which he refutes. Jesse McCree, the wonderful man that he is, lives a double life as a reporter where he talks himself up. That’s a true legend, right there.

I hope we end up getting that cinematic for McCree during BlizzCon. He may be a drunk, he may be considerably more difficult to play than many other DPS for me, and he may be a nerd who is basically cosplaying 24/7… but he still manages to be one of Overwatch’s best heroes, and that’s something we can all admire.