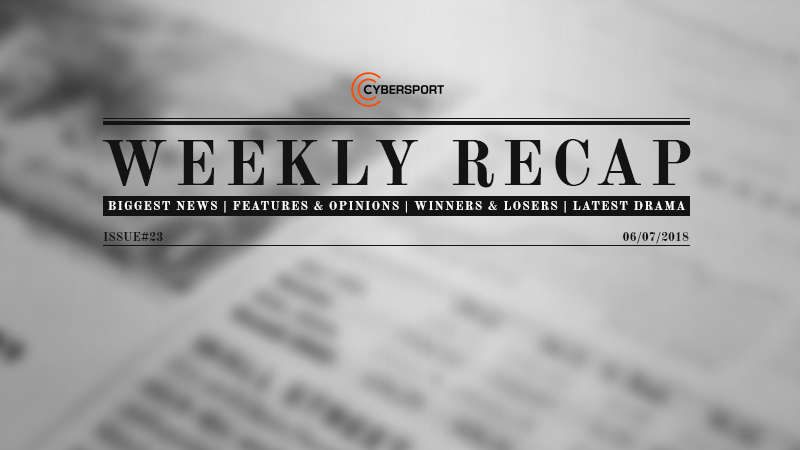 ESL Cologne 2018 has played host to some suspenseful showdowns as the final teams are locked in for the playoffs, whilst Ghostik has left Team Empire, and the applications roll in for EU LCS partnerships. It’s the Weekly Recap!

Late last night, ESL One Cologne 2018 had its third day of competition come to a dramatic halt. Two more teams booked their spots in Cologne’s quarterfinals, while the defending champions were among those dumped out of the $300,000 event.

Natus Vincere G2A and BIG were the pair to proceed to the playoffs, with the latter seeing off the lineup that had emerged victorious from 2017 victorious: MIBR (who had won last year’s competition as SK Gaming). A trio of other quality teams were knocked out in yesterday’s lower bracket knockouts, with ENCE eSports, Renegades and North all sent packing on a tense day of action.

Team Empire‘s failure to even get out of the group stages of the CIS qualifier for TI8 is one of the biggest disappointments of this season. That changes were needed was clear, and the first big change was announced today.

Empire’s offlaner Andrey “Ghostik” Kadyk will be departing the team, effective immediately.  Ghostik joined the team after TI6 and was — until now — the 2nd-longest standing member of the ever-changing lineup, only beaten by captain Yaroslav “Miposhka” Naidyonov.

The European LCS is on the verge of entering a new era in 2019, and two teams have already announced that they have applied for a franchising spot. Giants Gaming and Team Vitality have notified their followers on social media that they are candidates for an LCS spot in 2019.

The latest applicants, Giants, bolstered their chances with a significant sponsorship deal inked with the Spanish antenna of multinational telecommunications conglomerate Vodafone. The organization also counts Ozone Gaming (a peripheral manufacturer owned by Giants founder José Ramón Díaz), VS Gamers and KontrolFreek among its partners.

ESL are a prominent tournament organisers in the competitive gaming scene, responsible for years of top tier esports events. The organisation was host to five of all thirteen CS:GO Majors, delivering on every occasions they were presented. Outside of aforementioned Major events, the tournament organiser is responsible for the ESL Pro League, ESL One and IEM event, all of which are celebrated by the community both upon announcement and when underway.

According to a report from dbltap.com’s Jarek “DeKay” Lewis, ESL were granted the first Major championship event of 2019. No specific details were outlined in the report, however it was suggested that the Major is intended to commence in in late February, pouring over into March.

Strongest Dota 2 captains: Fly at the helm of Fnatic and OG

Throughout his career, Tal “Fly” Aizik has only been successful with teams in which the helm was ceded to him. Never placed among the strongest of fifth-position players, he was nonetheless the captain of the best team in the world for several years. This is the story of Evil Geniuses’ new leader’s journey, from playing Heroes of Newerth to being dubbed a “Master of the Majors”.

And more…
Virtus.pro GM Roman Dvoryankin on HS and Artifact: “Even if you’re the best in the discipline, if the discipline is not big enough there’s no reason to be invested in it.”
How Wrecking Ball will live up to his name