The new Odyssey: Extraction mode is all about finding a set of Augments that suit your play-style and mastering it. With that, anybody can eventually beat the terrifying Onslaught difficulty. However, if you want to know some tips to maybe ease your pain, that’s why I’m here.

After playing the game for two days, and eventually even beating Onslaught, here’s what I’ve learned.

For a specific guide to learn what the game mode is about and how to play, check out our explainer.

Once you play the game mode several times, you’ll likely start figuring out Kayn’s attack patterns. You’ll know when to dodge and run and when to spam all your abilities on him. The thing that makes Kayn’s fight (especially in Onslaught) harder than it needs to be is all the monsters he summons. It’s extremely hard to kill Kayn when you have a wave of tough baddies you have to clear first. That’s where Malphite comes in.

Using the Relentless Augment, you should be able to plow all those adds into a wall. Take in as many as you can, as far from your teammates as possible. Paired with Onslaught, which increases your ultimate damage and reduces your cooldown the more enemies you hit that means you can constantly be slamming hordes of bad guys into the wall, keeping them busy.

Aftershock is another Augment that can help you actually clear out and kill those adds without your teammate’s help! It causes Grand Slam’s area of effect to be bigger and for the area to erupt with more damage after two seconds, much like a Karma ulted Q.

If you’re struggling to stay alive while pushing all these guys away from your friends, a Sona can help you clear easily.

If you dont really want to play Sona, who is the Odyssey crew member who seems to be the least helpful in this game mode, Ziggs is a good healing alternative, especially since he heals more than Sona can. 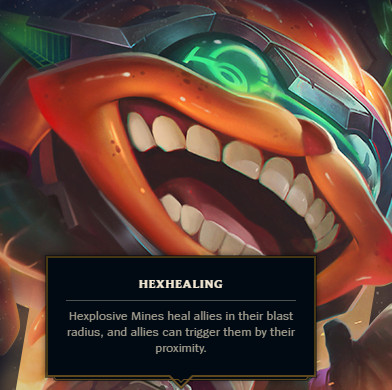 The Hexhealing Augment makes it so his Hexplosive Mines still hurt the enemies, but will also heal allies. It heals allies quite a bit, too. Paired with the Refresher Augment, the mines will reappear in the same spot after cleared, so that’s double the heal.

Many lives can be saved by chucking some Hexplosive Mines to your allies.

This build looks like garbage but it is absolutely mortifying. If you equip Ziggs with Augments focused on his passive, Short Fuse, he will be dishing out incredibly huge amounts of damage from just his basic attacks.

Bounce makes Short Fuse bounce, like a Jhin Q. Shorter makes his passive deal double damage and have a two second cooldown. This means you can just be chucking Qs and basic attacks for some silly damage. If you have enough Augment slots, you can pair it with the healing Ziggs Augments I talked about above and turn into an all-in-one monster.

The Comet Augments on Jinx are necessary to play her.

Jinx is a little lackluster in this game mode, as she can’t really keep up the damage with the others. However, the Augments that focus on her ultimate make her pretty viable for a damage-over-time champion.

After equipping Comet and Arsenal, Jinx’s ultimate is now a great damage-over-time spell. Her Mega Death Comets will leave behind trails, like Corki’s Valkyrie, that will burn the enemies. This is great for clearing those Vel’Koz-like monsters that fire bullets from across the map, or just huge hordes of bad guys. Pair this with some spell vamp and she’ll be healing back any damage she takes.

Yasuo’s Chivalrous Augment is a life-saver.

Yasuo is viable in every sense of the word. While you definitely want his Augments that improve his tornadoes or critical strikes, if you have an extra Augment slot, you should take Chivalrous. It lets him dash to allies and provide them with shields! This is pretty helpful as those shields can eventually get pretty big.

Like I said before, you can become an expert of any Augment set and definitely beat Onslaught that way. These are just the easiest ways to beat the stuffing out of Kayn that I picked up. If you have other expert strategies, drop them in the comments!