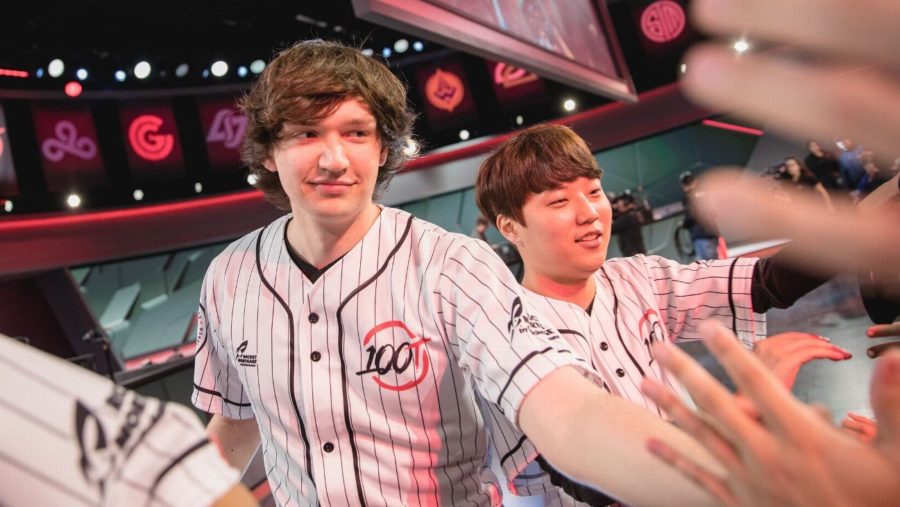 Sources told ESPN’s Jacob Wolf late Sunday that 100 Thieves and FlyQuest have reportedly made a trade hours following a perfect 2-0 weekend for both teams in the North American League of Legends Championship Series.

Former 100 Thieves starting jungler William “Meteos” Hartman went on social media to break the news, announcing his contract had been traded to FlyQuest, whom informed him it would be sticking with current starter Lucas “Santorin” Tao Kilmer Larsen and leaving him mulling over his future.

Also in the trade, FlyQuest sent over its current Academy jungler and last split’s jungler starter, Andy “AnDa” Hoang, where he will seemingly take over as 100 Thieves’ new Academy jungler as the franchise promotes its standout Vietnamese import Đỗ “Levi” Duy Khánh.

Levi will make his debut for the main 100 Thieves squad this coming Thursday in Los Angeles at the international Rift Rivals event, where the top three teams from North America will battle against the top three from Europe for ultimate bragging rights.

That’s a lot to take in at once, and not just for the players affected by the trades. To put things into perspective, let’s go down the list on who is affected most by this trade.

This trade hurts no one more than one of the original homegrown stars of the NA LCS. After coming out of semi-retirement last year to play for Phoenix1, Meteos has established himself once again as one of the better junglers in the league, and he played an integral role in 100 Thieves making the spring final in its inaugural season.

Meteos doesn’t deserve to start in the NA LCS because of his past accomplishments or skill. No, he’s earned the right to be a starter in the league with his consistent play over the last year, and with a refocused mind on the professional scene.

It’s a move that on the surface makes little sense to someone outside of the 100 Thieves camp. Meteos has been strong in the jungle, the team was the runner-up last split and it currently sits in a four-way tie atop of the league standings at 4-2 with an inside track at Worlds if it can keep up its momentum into the postseason.

Meteos has a right to be upset. He’s a longtime veteran who turned away from streaming to have another crack at worlds, and right as it seems like he is two months out from making that goal a reality, he’s traded to a team that has almost no chance to make worlds — and one that doesn’t even see him as its primary starter.

The only possible silver lining is the international break that all leagues will have during Rift Rivals. FlyQuest owns Meteos’ contract, and although it doesn’t see him as a starter at this moment, that doesn’t mean another contending team in the league couldn’t be swayed in picking up Meteos or even trading for him. As a residential talent, Meteos has immense value, and there should be at least a few interested parties over the international break.

Team SoloMid, perhaps? Hey, what about Cloud9, the team Meteos helped build into a dynasty, which currently sits at the bottom of the table with a 1-5 record? There are teams in the NA LCS that could use Meteos as a starter, but for right now, it looks like FlyQuest isn’t one of them.

This is a gamble that could make or break the franchise’s standing with fans in League of Legends. Meteos is one of the most popular players in the region’s history, and trading him away to apparently start Levi over him will either be seen as ingenious in a few months or one of the dumbest moves in the game’s long history.

Furthermore, this puts all the pressure in the world on of Levi’s shoulders. The former Gigabyte Marines ace became an overnight sensation last year at the League of Legends World Championships when he dazzled millions with his aggressive jungling and unique champion picks.

Now, a few months into his American stay, Levi will need to show results as soon as he plays or be labeled a bust by distraught Thieves fans.

This is not an easy situation to come into. If this was, let’s say, Golden Guardians or OpTic Gaming, Levi could be given an entire season or two to get used to his surroundings and teammates. On a team that is on pace to make worlds, failing to go far in the playoffs and/or missing the international tournament would be seen as a gigantic blunder.

Individually, Levi might be one of the most mechanically gifted players to ever set foot on an NA LCS stage. On a team, though, speaking a language that he wasn’t too confident in back when I talked to him at All-Stars last year, it’s a whole different story. It isn’t exactly fair that Levi will have to live up to such meteoric expectations right away, but that’s what he’ll just have to do to make 100 Thieves fans OK with this trade.

The underlying story that makes this trade even bigger is the fact that Levi will be taking up one of the valuable import slots on the LCS roster, which means superstar top laner Kim “Ssumday” Chan-ho might be the odd man out. Ssumday will be sitting on the sidelines during 100 Thieves’ entry at Rift Rivals, and Brandon “Brandini” Chen will be getting the call up from the Academy team to play alongside Levi on the topside of the map.

While Meteos is still one of the better junglers in the league, especially when you consider that he doesn’t take up an import slot, Ssumday is legitimately one of the few world-class players in the NA LCS. Two years ago, there was an argument Ssumday was the best top laner in the world and a top-three player overall in the league. And though he might not be as good as he was on an all-South Korean-speaking team that played around him like on KT Rolster, Ssumday is still a game-changer on Summoner’s Rift, and like Meteos, too good to play in the Academy league.

This leaves the question: If Brandini and Levi become the starters on 100 Thieves, what happens to Ssumday? Like Kahwi Leonard in the NBA on his way out from the San Antonio Spurs, could we see #SsumdayWatch2018? There should be no shortage of teams in the league (or around the world) who would be interested in his talents, and if Ssumday isn’t happy just sitting on the bench whilst playing in Academy, there could be an opportunity to move him and his contract to a new team.

AnDa was seen as a franchise jungler for FlyQuest when it started him last split, but inconsistent play hampered his debut and sent him tumbling down back to the Academy league. Going over to 100 Thieves Academy is a chance for him to get his career back on track, and if Levi fails to deliver, this could lead to a starter job alongside Ssumday with a chance at worlds. So, all in all, it’s either a lateral move for AnDa or one that could see him playing on an international stage. Big win for him.

FlyQuest went 2-0 this week, is on a three-game winning streak, and Santorin had possibly the performance of the weekend with his hard-carrying performance against Counter Logic Gaming. For a team that looked far and away the worst in the league two weeks ago, this group doesn’t seemingly want to change its starting roster and believes it can make the playoffs. Hey, FlyQuest is in a playoff position right now, so why shake things up?

With franchising now in place and longer-term contracts with bigger figures being signed, this trade is a warning for any player going into a discussion for a contract this offseason. While getting paid a ton of money to play video games might sound cool, not having guaranteed money or a no-trade clause can make a six-figure (or even seven-figure) contract look not-so-great when things don’t go your way.

Meteos wasn’t struggling, was on a team on the road to worlds and is a longtime veteran of the league who is highly marketable. If he can get flipped mid-season for an Academy player and not have a starting spot in the league, that can happen to almost anyone.

So with the announcement of a Players Association and the lightheartedness some players have shown on social media it, this trade will be a wake-up call that players of the future will need to take things more seriously. If not, we might see a player traded to Antarctica next year for a penguin to be named at a later date.

Welcome to the franchise era, friends.