It feels like we’ve been waiting for Hammond — apparently now known as Wrecking Ball — to hit Overwatch for ages now. But the wait is finally over, as hero 28 has officially been revealed. It’s great that Hammond is a hamster who likes to roll around and blow stuff up in a giant mech, but what we all really care about is what his kit looks like.

Here’s the full list of Hammond’s abilities and what they do.

Hammond fires his automatic machine guns as his primary fire.

Hammond rolls up into a ball, increasing his movement speed and mobility.

Hammond instantly transforms into his Roll mode and shoots out a grappling hook. If it hits a surface above him, he will suspend himself and gain a full range of movement in his suspended state. He can then swing himself back and forth, gaining momentum. As he gains speed, he will be able to knock back and damage enemies that he collides with.

Hammond creates a personal shield around himself. The shield amount is increased by how many enemies are nearby.

When Hammond is a certain distance above the ground, he can slam himself quickly into the earth below. This will damage and knock-up any enemies hit.

For his ultimate, Hammond will scatter mines all around him, denying the area for any eager to invade enemies. 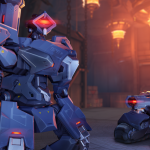