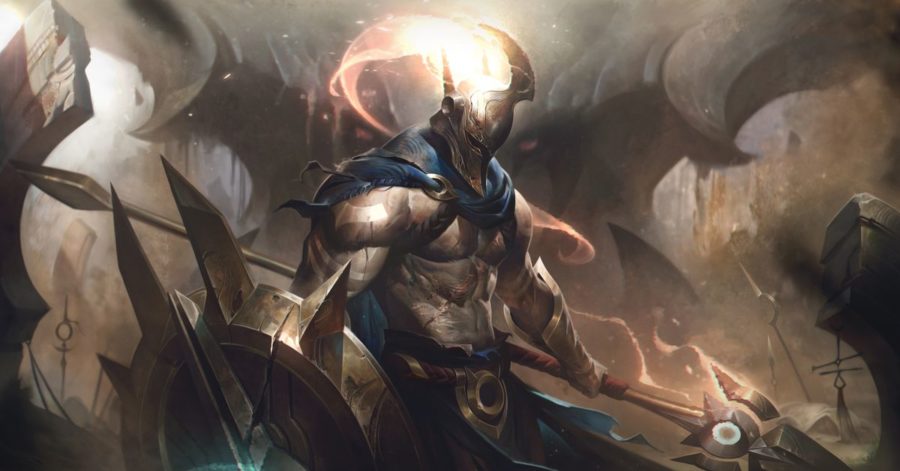 Ed. note: League of Legends champions evolve over time, and so this post will, too. This post was last updated for patch 9.16.

Everyone’s favorite spartan warrior has received a visual and gameplay update in this patch! His basic spartan soldier look has been scrapped in favor of a more celestial god style, adding better visuals and more interactive gameplay to the champion. For this guide I’ll be focusing on solo lane Pantheon, but he can still be played as a jungler just fine. Let’s Grand Starfall into it and take a look at his kit.

Upon reaching full stacks, Mortal Will empowers Pantheon’s other basic abilities. One thing to note is that Grand Starfall grants full stacks of Mortal Will, making the first ability used after ulting empowered. Mortal Will adds tons of situational power to Pantheon, meaning that every empower is strong and useful depending on the situation.

Comet Spear works much like Pyke’s Bone Skewer in that it can be tapped or held down and will do different things depending on which you choose. Holding down the spear is better if you can get a clear shot on your opponent and they are low health, as it deals execute damage. If you’re in a skirmish and have the possibility of getting multiple spell rotations off, then tapping Q will usually be better as you get a 50%cooldown refund from tapping.

Shield Vault works almost exactly like Pantheon’s old W. The only differences are that you no longer get the damage block shield as that was tied to his old passive, and this new W can be empowered. The empower on this one can be good if you have on-hit effects as it gives you three (weaker) auto attacks in one. This also counts as three procs for your passive which ends up allowing you to get two empowered abilities cast in quick succession.

This is the coolest new addition to Pantheon’s kit. You are completely invulnerable to damage in the direction you are facing during Aegis Assault. There are a lot of cool tricks you can do with this, such as activating Aegis Assault in the direction of an ulting Karthus to negate the damage from his ultimate anywhere on the map. Being able to block all incoming damage from a specific direction is game changing and makes Pantheon deceptively tanks, allowing you to tank an incredible amount of damage that you otherwise wouldn’t be able to.

This ability looks so beautiful now, you come crashing down to the battlefield like a meteor hitting the earth, damaging anything in your path and gaining full stacks on Mortal Will. Grand Starfall works much the same as Grand Skyfall did, so there’s no need to worry, pre-rework Pantheon mains, you can still camp my lane with it.

Just like old Pantheon, you’ll want to max out Q first. This is your main trading, poking, and killing tool and it needs to be dealing as much damage and have as low of a cooldown as possible at all times. The tap area-of-effecthalving the base cooldown is amazing for both pushing and trading in lane and incentivises maxing Q even harder. E gains a large chunk of damage and a nice amount of base cooldown lowering from points in the ability. E is your longest cooldown ability but also your main way to survive in a teamfight. Blocking all incoming damage from one direction in a teamfight can allow you to survive for so much longer and tank more damage for your team overall. W is left for last as you simply don’t gain as much benefit from points in it over the other two abilities. You gain a little more damage and a lower cooldown, which can be useful in specific situations, but will almost never be as useful as the other abilities.

Conqueror is the strongest keystone for Pantheon. It gives you a strong mix of damage and healing allowing you to stay in the thick of the fight for longer. I recommend grabbing Triumph, Legend: Tenacity, and Coup De Grace as they all work well with Pantheon and his playstyle. Coup De Grace works especially well with your Q execute. I usually follow up with Inspiration secondary taking Biscuit Delivery and Time Warp Tonic, but I found some decent success taking Resolve secondary with for Demolish and Second Wind as well. For shards, the extra attack speed from the offense tree as it allows you to stack your passive faster and helps with farming and pushing, but going Adaptive Force works well also. Always take Adaptive Force in the flex shard for additional damage. Grab Armor or Magic resist in the defensive tree depending on your lane opponent.

If you want to try a more burst damage assassin-like Pantheon, then try out Electrocute. The runes you choose in domination aren’t too important and you can use your personal preference. As for secondary, take Sorcery with Absolute Focus and Scorch. This will make you a poking monster, with strong all in potential in a one on one. Spam out your spear and poke your opponents low enough to go for the kill.

There were two main builds I found tons of success with. The first was a bruiser build, opting for a healthy mix of damage and bulkiness which allows you to teamfight well without getting blown up.

Spear of Shojin has some pretty unique interactions with Pantheon, most notably with empowered Shield Vault. Since each of the three hits count as an auto attack, you get three procs of the Shojin’s Awakened Dragon passive, lowering the cooldown of your other basic abilities by a ton.

The other build I’ve had success with is a Trinity force rush into Sterak’s gage and Death’s Dance as your core items. This is a quite expensive build but turns you into a skirmishing god able to stay in fights a lot longer and dish out tons of damage.

Pantheon wants a team who can follow up on his engage, or champions who can engage as he is channeling ult. Grab some of these champions in order to help your Pantheon succeed.

When facing a Pantheon, you can try to counter him by picking a champion that he cannot bully in lane, denying his snowball potential. You may also want to try to lock him down during teamfights. Crowd control is a big weakness.

Pantheon’s rework looks to be a success, making him more fun and interactive to both play with and play against. If you want to live out your fantasy of being “The Artisan of War” or are after a new solo laner or jungle champion to try out, give the new Pantheon a chance.