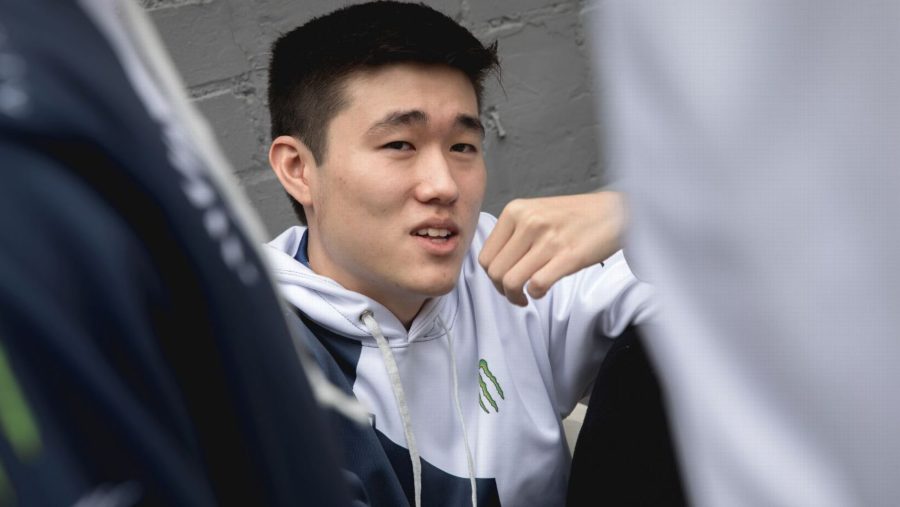 Pobelter is the face of consistency on evolving Team Liquid

“At this point, they always just say, ‘Do the pose,'” Eugene “Pobelter” Park said.

He stood up, back slightly turned. It showcased the bold “POBELTER” lettering across his Team Liquid hoodie. He glanced over his shoulder. His cheerful expression dropped into one of thoughtful contemplation for a moment, before he laughed a bit.

Pobelter, another known quantity in the North American League of Legends Championship Series, has been doing this for years. He has been in countless features for Riot Games, more of which are coming, according to Pobelter’s schedule this week.

“We don’t have that much time to practice because we’re really busy with travel, and then Riot, we have a lot of obligations for feature content and then we have a fan meet,” he said of Team Liquid’s preparation for this weekend’s NA LCS Summer Finals. “So not too much time, but I’m pretty confident.”

Another week of preparation. Another NA LCS finals — Pobelter has attended three and won two. Another qualification for an international event, this time the 2018 League of Legends World Championship. Whether it’s because he’s a veteran player who has grown to place one foot in front of the other before looking ahead or a part of TL’s larger philosophy this split, he immediately brushed aside any thoughts of Worlds.

“Mostly, I was really relieved that we won,” Pobelter said. “We’re not really looking at Worlds at all yet. Everything’s focused on the match next week and then we can worry about Worlds and everything next week.”

Eugene “Pobelter” Park is no stranger to the biggest stages in the NA LCS and will once again try to lead his team in a domestic final as the consistent presence in the mid lane. Riot Games

This year was a test for TL’s League of Legends team. The organization assembled some of the strongest talent available in North America last offseason in a fusion of the 2017 Immortals with top laner Jung “Impact” Eon-yeong and bot laner Yiliang “Doublelift” Peng. It was an immense monetary investment that didn’t end with individual player contracts. The organization also announced and opened its Alienware Training Facility, promoting a healthier alternative to the traditional esports gaming house that more clearly separated home from work.

“I thought to myself, ‘This is so taxing on the mindset of these athletes to live and work under a magnifying glass,'” Liquid co-owner Steve Arhancet said on the evening of the facility’s grand opening.

“It’s not healthy. In esports, maybe you’re not sweating like you’re running a decathlon but you have to be mentally acute before you go into matches. You need to be ready, and here we are with the mind being the most important asset for esports athletes and we’re treating it like this? What the f— are we doing? We’re creating stress by putting them in this bubble.”

The adjustment wasn’t immediate for most players, especially those who had come of age at the same time that LoL esports was adopting the South Korean gaming house model. Pobelter entered the competitive system formally with Evil Geniuses back when he was still completing high school. This meant that scrims were pushed back to later in the afternoon to accommodate his senior class schedule. Later, when he moved into the gaming house, his life became League of Legends. In gaming houses, life and work are one and the same. The goal of TL’s separate training facility and individual apartments is to create more space between work and life.

It hasn’t always been smooth sailing for TL this year. Adjusting to the separation, like anything, was a process. A few emotions bubbling beneath the surface came to light at the Mid-Season Invitational, where support Kim “Olleh” Joo-sung benched himself for one game due to self-admitted internal issues. Since then, Olleh has been much more open and honest about his anxiety, talking to Liquid staff and working through it in a healthier way. Although the adjustment wasn’t without its hiccups, it now seems to have worked out for the better, and earned TL another trip to the NA LCS finals along with Worlds qualification, all while proving that an esports career, like any other career, can benefit from creating space between work and a player’s personal life.

“It sucks because we have to wake up earlier to get there and then have to go back late at night,” Pobelter said a week after the training facility opened. He laughed a bit. “I can’t take a shower between scrim blocks if I didn’t take a shower that morning. But it does feel a lot more focused than rolling out of bed, and then hopping on my PC just in time for scrims. I always joke that, ‘Oh, these aren’t my teammates but my coworkers.’ It feels like we’re going to work because we share the space with a lot of the business side of Team Liquid too.”

Even now, you can see windows into another life for Eugene Park, without the Pobelter gamertag. Brief snapshots, when he plays the violin on stream, picking out songs by ear during queue times, or his offhanded mention that he could have become a doctor — the career that he first dreamed of at his parents’ suggestion.

“My motivation, I thought about that for a while, actually. Like, philosophically, what does it mean for me to be a pro gamer, for me to choose this path in life? Because, you know, you could do anything, go to school, become a doctor, something like that,” Pobelter said. “So what makes my choice valid or what’s the motivation in that?”

His answer is thoughtful, with a twinge of existentialism. You, yourself, add the meaning, and motivation will follow.

“I guess I just figured that you, yourself have to give it meaning and give it motivation to just pick one path and go down that path. My path right now is to be a pro gamer and do the best I can at it,” Pobelter said. “When the next phase of life happens, I can look back on it and really appreciate it, but for now I just want to — I can’t be a pro gamer forever, right? I’m probably not going to be playing League of Legends competitively as a 30-year-old or as a 40-year-old, so for however much time I am doing it, I just want to do my best.”