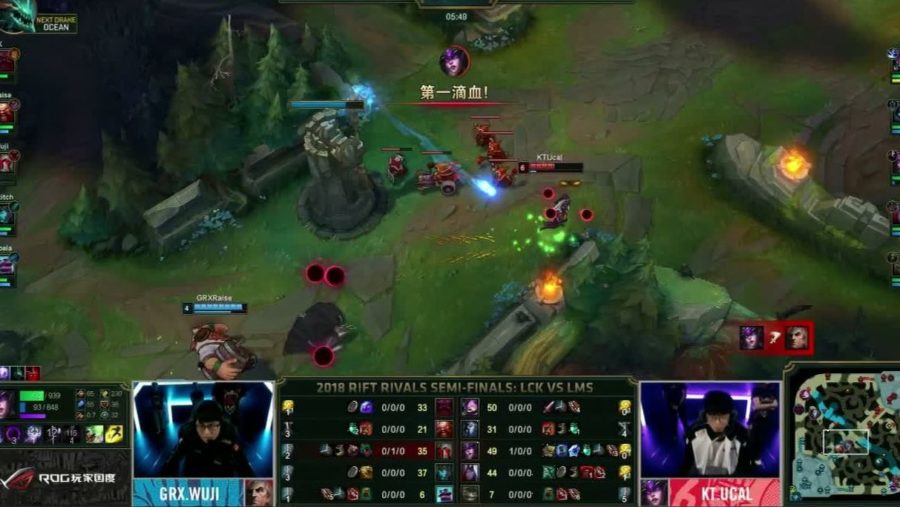 While the LPL were the favorites coming into the night — the dominant performance of Royal Never Give Up during the group stage gave the Chinese teams too big of an ace in the hole to be ignored — it was South Korea’s LCK that actually started out the night in a dominant position. The first match between Invictus Gaming and KT Rolster resulted in a victory for the latter team, putting the LPL in an early hole.

Song “Smeb” Kyung-ho proved once again why he’s often seen as the best top laner in the world as he navigated a volatile top lane matchup against Kang “TheShy” Dong-geun. A few desperate moves by Invictus to break the flow of the game only resulted in it falling further behind, as an unusual but intelligent Vel’Koz pick by AD carry Kim “Deft” Hyuk-kyu made it almost impossible for Invictus’ composition to function, allowing KT Rolster to give the LCK an early advantage.

That lead wouldn’t last, however, as China struck back swiftly by fielding the MSI champions, Royal Never Give Up, against LCK’s SK Telecom T1. The latter barely managed to survive to the 20-minute mark, as RNG’s aggressive composition built around jungler Liu “MLXG” Shi-yu’s Camille and mid laner Li “Xiaohu” Yuan-Hao’s Lissandra easily dissected an ambitious fusion between the funnel and Mordekaiser strategies by the side of SKT. A level two kill onto Kang “Blank” Sun-gu by Xiaohu and MLXG set the pace of the game, and gave the duo free clearance to roam around the map, as it all but shut off the funnel before it could even begin. SKT were left with no choice but to go for a risky Baron rush at 20 minutes that left the entire team dead.

Edward Gaming and the Afreeca Freecs were the next teams up to bat, in a game that was remarkably similar to the one that had come before, albeit with a different result. Afreeca flexed Lee “KurO” Seo-haeng’s early Zoe pick into the bottom lane and punished a Yasuo pick by Lee “Scout” Ya-chan with a Xayah and Rakan funnel of its own. EDG simply didn’t have the tools to counteract the call by Afreeca, as its melee mid laner never put any pressure on the funneling duo, and, perhaps even more critically, its “counterpick” against Kim “Kiin” Ki-in’s Gangplank in Jeon “Ray” Ji-won’s signature Jarvan IV fell completely flat. While EDG did manage to find a miraculous teamfight into a Baron, it was enough only to stem the bleeding for a few minutes, as Afreeca took the match and gave the LCK a 2-1 lead.

The region’s hopes of defending its Rift Rivals title came to rest on the shoulders of Rogue Warriors, who looked miserable against KT Rolster earlier in the event. This time it would be Kingzone DragonX who would take on the Chinese “superteam,” however, and the LCK’s first seed is known for choking when it matters. Unfortunately for the LCK, that tendency reared its ugly head here as Rogue managed to keep China’s hopes alive by routing Kingzone in late game teamfighting, which led to a surprising victory.

China elected to stake its hopes for victory on the MSI champions in Game 5 of the series, while the LCK opted to rely on the Afreeca Freecs, who earned the most dominant win of the night. Even this challenge seemed utterly beneath RNG, however, as the Chinese side once again answered the now-standard Korean draft shenanigans with a focused and simple team composition that brawled its way to a one-sided victory. This time it was Jian “Uzi” Zi-Hao’s chance to shine as a well-defended Varus against a composition that had precious few ways to pressure him. The fact that Afreeca couldn’t dive onto Uzi ended up being its undoing: he ended the game with far and away the most damage dealt, a 5/0/2 KDA, and another trophy for the LPL’s trophy case as he once again claimed the LMS x LPL x LCK Rift Rivals title for the second year running.