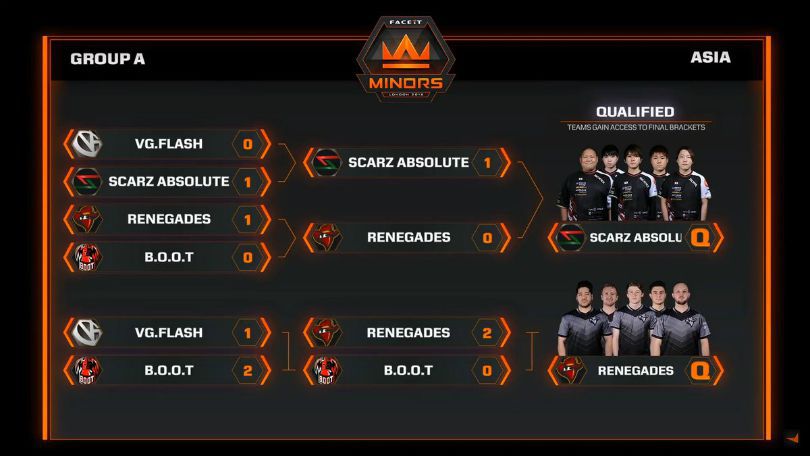 Earlier today history was made by Japanese side SCARZ Absolute, who were crowned the first Japanese roster in the history of CS:GO to make the playoffs of a Minor championship, in this case the Asia Minor. The quintet upset both VG.FlashGaming and Renegades in the group stage matches of group A, leading to guaranteed placement in the semifinal of the championship.

Upon conclusion of the group A matches, Renegades were able to climb back after being upset by the Japanese, besting B.O.O.T-dream[S]cape in the group’s decider match, thus securing the lower seed semifinal placement. Both the Aussies and Japanese now await their competition, which will be determined in tomorrow’s group B matches, where we will see initial pairings between TyLoo vs. 5POWER and Tainted Minds vs. Uniquestars.

The Asia Minor is the third of four regional Minors taking place over the course of July, with the CIS and Americas Minor having concluded earlier, meanwhile the Europe Minor is set to commence on Jul. 19. In the prior two regional championships, HellRaisers & Team Spirit and compLexity Gaming & Rogue, respectively, made the cut for the Major, which will be taking place over the course of September 2018.