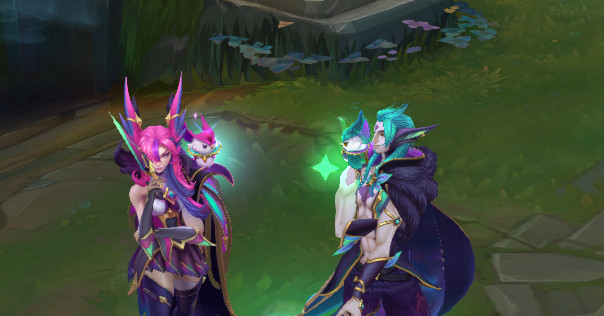 It’s that time of year again — we’re getting a new set of anime inspired Star Guardian skins. The Star Guardians are magical girls (and a few boys) who balance school and making friends, with fighting cosmic monsters. This year, the new additions to the Star Guardian roster are Zoe, Xayah, Rakan, and Neeko.

While some of the characters look closer to Dark Star characters, that seems to be an affect applied when they use certain abilities. A high res screenshot shows what Xayah and Rakan look like when that effect isn’t active (which should be 90% of the time.)

Yes, you are correct, thank you. Here’s a high res picture for your efforts! This is what Xayah and Rakan look like 90% of the time. pic.twitter.com/pvEAYdfzLf

Just because Star Guardian skins are available for testing doesn’t mean there are no surprises left in store. On Aug. 24, the official League of Legends account posted a Star Guardian teaser that shows some interesting hints.

The blue, green, and yellow gems likely correspond to three of our new Star Guardians. But what does “I will find you before her darkness burns you all away” mean? Who’s the Star Guardian holding the gems, and why are they not in touch with their colleagues? Who’s the “her”? Will we see some kind of nemesis for Star Guardians hit the PBE?

There’s still a lot to uncover, but at least we can comfort ourselves with looking at these pretty skins.