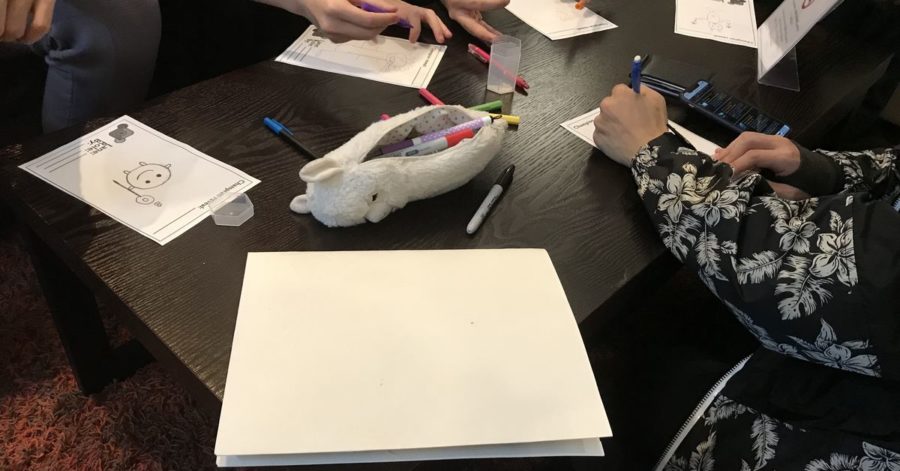 Everyone who plays League of Legends has probably thought about what their ideal champion would be if they were given the chance to design one. A new champion comes out, and you think, “That would be great, but if they had this skill, I’d love them even more.” After sitting down and chatting with Team Liquid, I assigned them the task of designing their ideal champion.

While the assignment did not include making a kit or anything, some of the team was eager to do so, while others looked at me with tortured eyes, while I forced them to draw a cartoon with tiny colored markers. Regardless, the results we got were amazing and I cannot wait for Riot to have to pay the Team Liquid crew so they can make these champions a reality in the future.

Take a look at the designs below, which really reflect the player’s personalities and playing style.

The interview below has been edited for clarity.

This is a champion that already exists, we think.Julia Lee/Polygon

Doublelift: My champion is Lulu — my ideal champion. All lanes, ADC buffbot. I tried to draw her but I don’t think it looks anything like her, but I think this is what Lulu should look like now, in her new skin.

Impact: I think she needs teeth.

Doublelift: TEETH? Does Lulu have teeth? I’m going to look this up right now.

The Rift Herald: I think she does. In one of her really creepy splash arts, her mouth is open.

Doublelift: Oh yeah, she does. She has teeth. I was close. 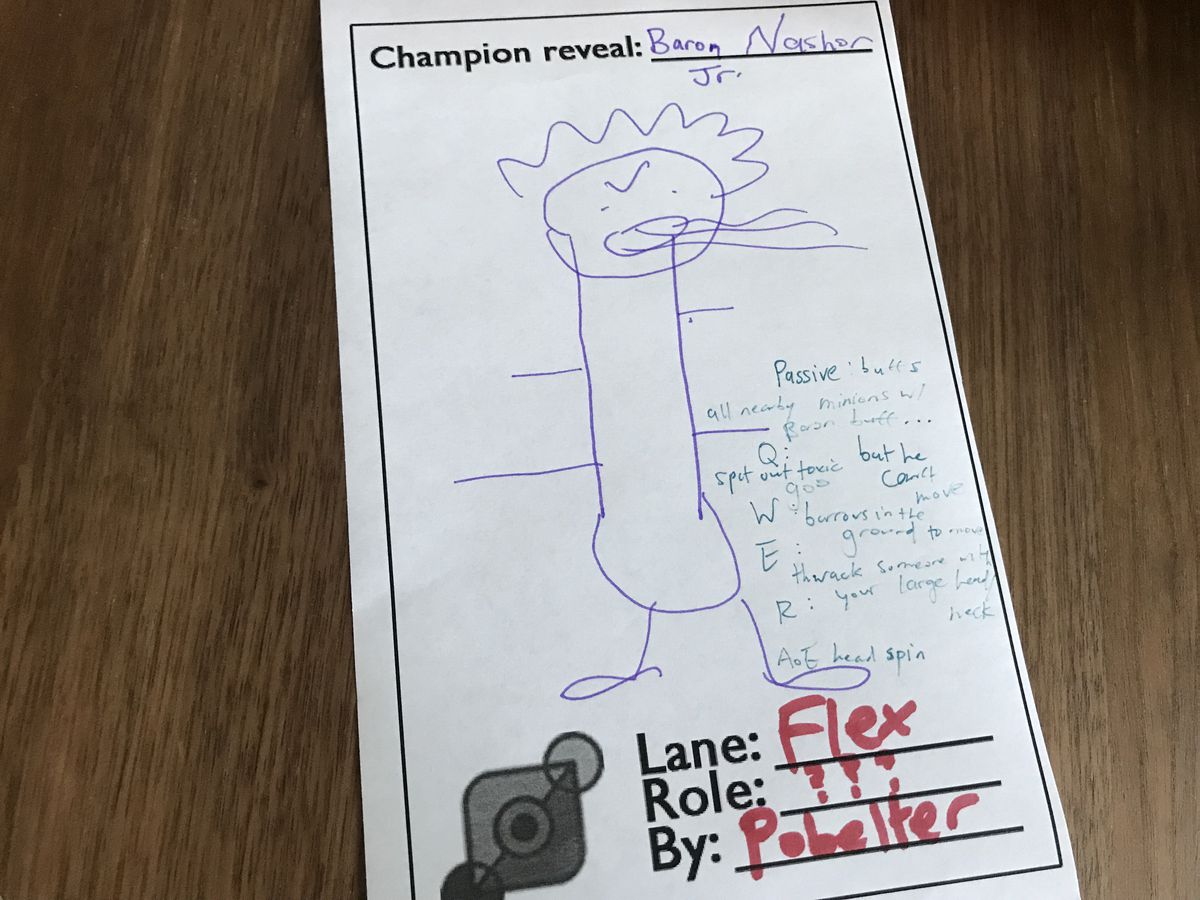 Doublelift: Dude, imagine if you could just have Baron on your team, but you have one less champion on your team. That would be insane.

The Rift Herald: Okay, Pobelter, tell me about your champion.

Pobelter: Okay, this is Baron Nashor, Jr. His passive is he buffs all nearby minions with Baron buff, but he can’t move. So his mobility spell is W, and he can burrow in the ground to move around, but he can’t move that fast. So it takes him three minutes to walk to lane. He’s half as tank as the real Baron, so yeah, it’s a high-risk, high-reward pick. He’s a flex lane pick and the role is ??? because you don’t even know what kind of champion he is really. With his Q, he spits out toxic goo. His W is his burrowing move, like I said. His E is “Whack Somebody With Your Large Head/Neck,” and his ulti is a large AoE head spin.

Doublelift: Thresh and Tahm Kench should just bring him around everywhere.

Xmithie: Riot should hire you, Eugene.

Pobelter: They should have implemented my very first champion idea in beta, when I said when Twitch ulted, it should become an FPS game. Because it was called Spray and Pray.

Xmithie: So it would just go to first person? 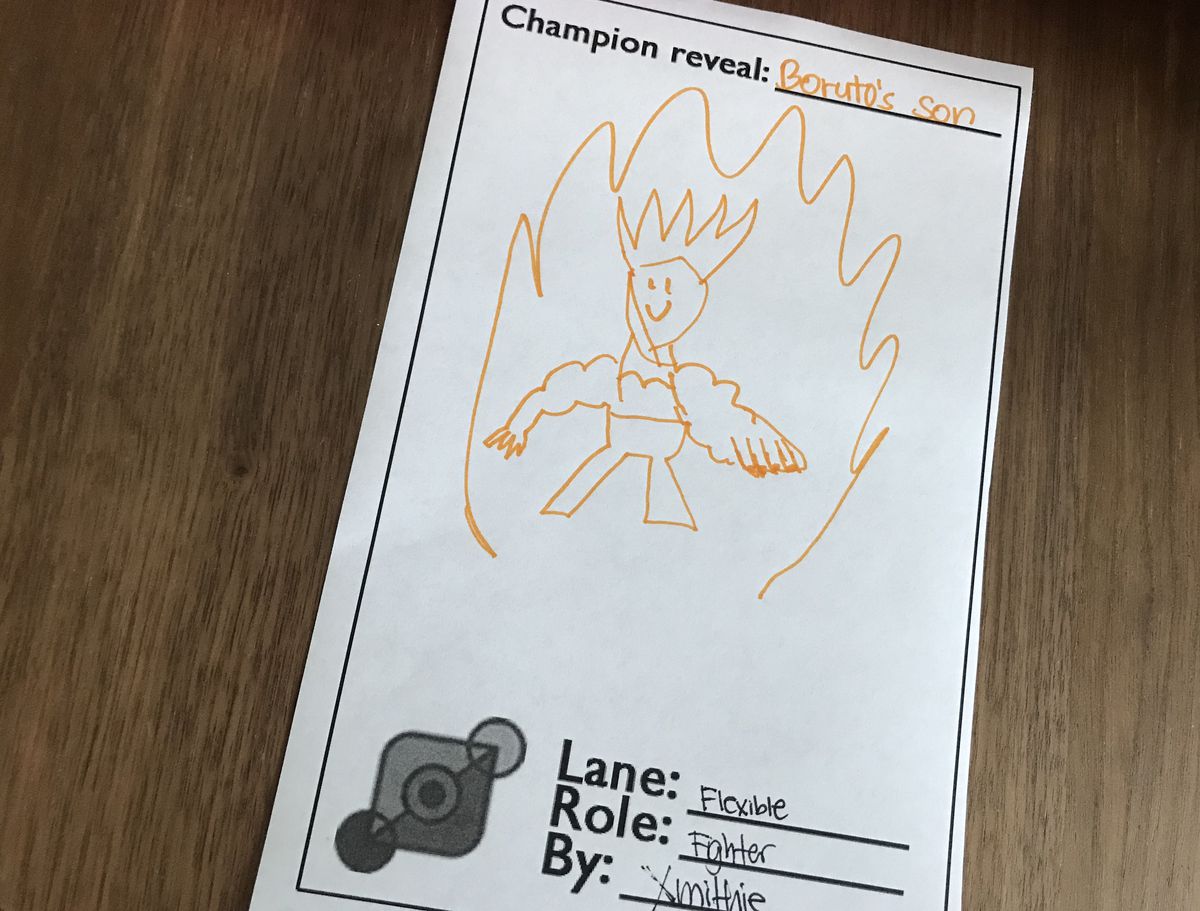 Xmithie: It’s not as great as what you created, Eugene. But it’s Boruto’s son. This is in the future, in like, ten years from now, where the Boruto season already ended.

Xmithie: And then there’s another anime. This is the guy and his lane is pretty much flex. His role is fighter. That’s pretty much it.

Xmithie: [gestures towards large hand] I was going to do a gun, but then I was like, fuck it.

Doublelift: It is in the future!

Xmithie: He was going to have five rifles instead. 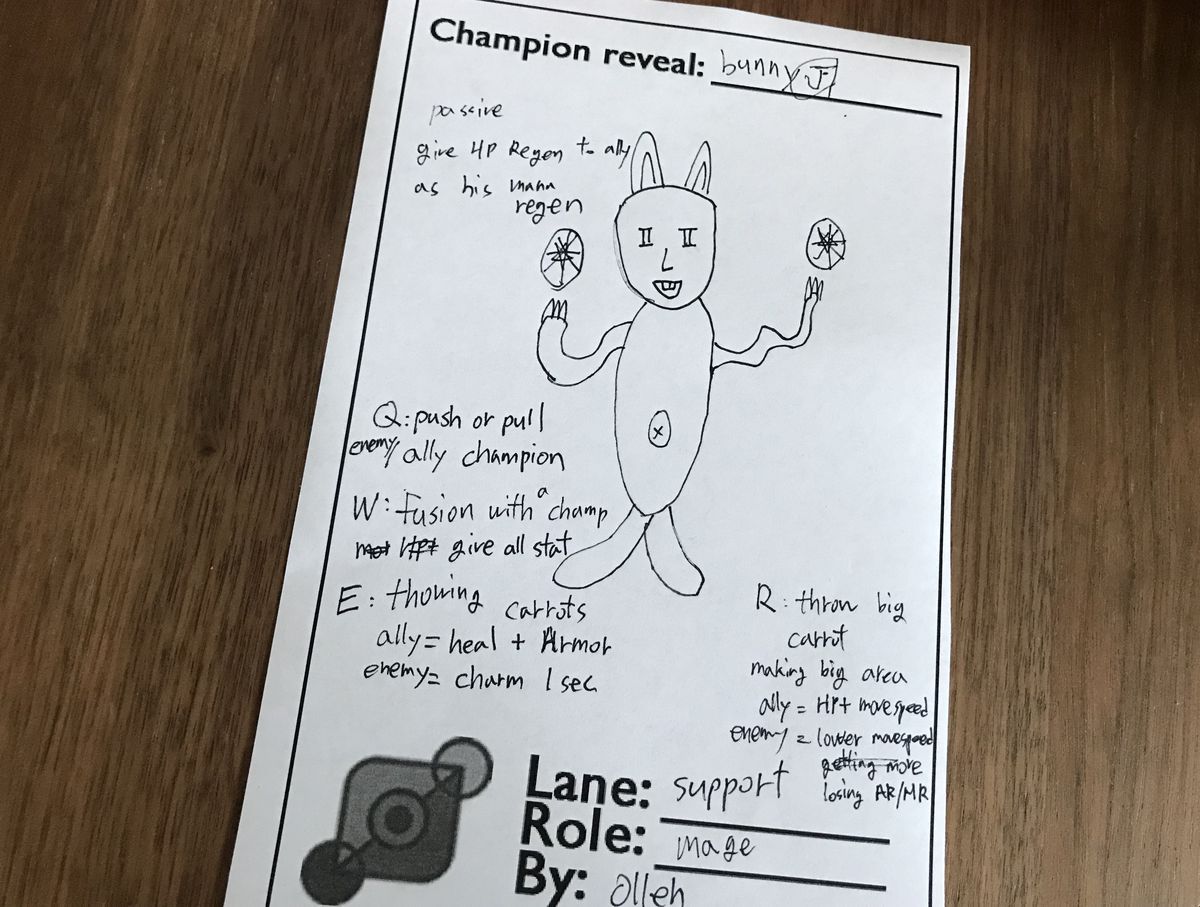 Olleh: This guy is Bunny J. He’s like, a rabbit magician. Q pushes or pulls the champion with magic. W is a fusion with AD carry and it gives more armor, HP, magic resist, whatever.

Doublelift: Woah! Wait, that would work really well with my champion! 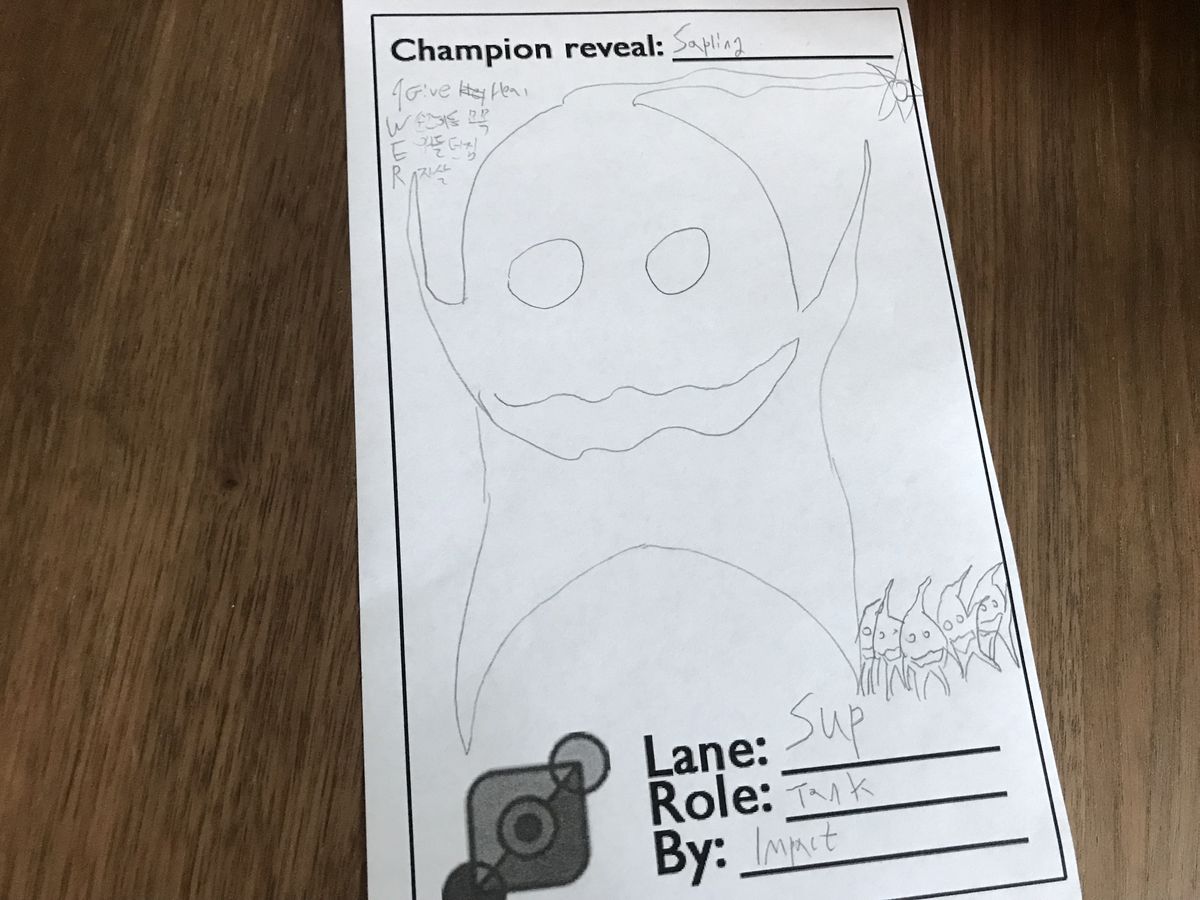 It seems like Impact had Maokai on his mind.Julia Lee/Polygon

Impact: My character’s name is Sapling. He’s support and tank. He has small brothers. Q, you can give health. W is that you can teleport there, if you drop a sapling. E is an instant boom. Ulti is just … he booms himself. Suicide.

[The entire team screams in laughter.]

Impact: He’s leadership for the small ones. He needs 10 seconds and he can change to a small one.