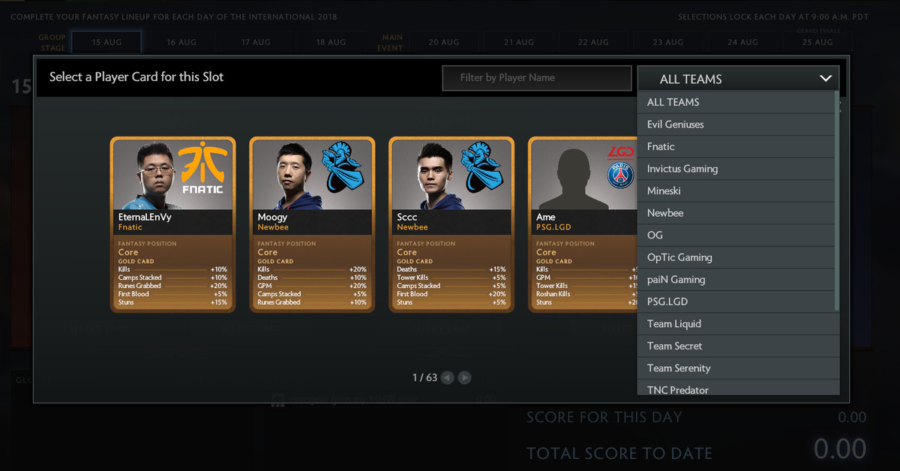 This year’s Compendium brings back plenty of fan favorite Battle Pass activities for those following The International 8 at home (or with a laptop in Vancouver). If you want to predict how the event’s going to turn out, there are a few avenues — for one, there are actual predictions, which earn you Battle Points.

If you’ve been following players a little more closely, then the Fantasy option is more than likely up your alley. This card-collecting league of sorts allows you to make predictions about how well players are going to do at the tournament, utilizing Dota 2’s extensive database of stats.

Want to just say Evil Geniuses is going to do well, in light or spite of how far they go? You can do that. Want an all-Pinoy team? Give it a shot.

At the end of it, you’ll earn Battle Points based on how well you predict versus everyone else playing — and you can even see how your friends are doing.

If you want to get started, look no further, as we’ve got your quick-start guide to playing along.

Of course, the first thing you need is your Player Cards. In order to obtain these, you need a Battle Pass. You’ll get a few packs at Level 1, then at Level 3, then repeatedly every few levels or so. If you’re two hundred levels up or so, it’ll be hard not to have every player at that rate, so don’t worry about going Aegis replica-tier.

Once you get your cards, you’ll need to access and open them. To do so, go to the Compendium portion of the pass:

Then, at the top, you’ll see “Player Cards” — open that up now and you’ll see this screen: 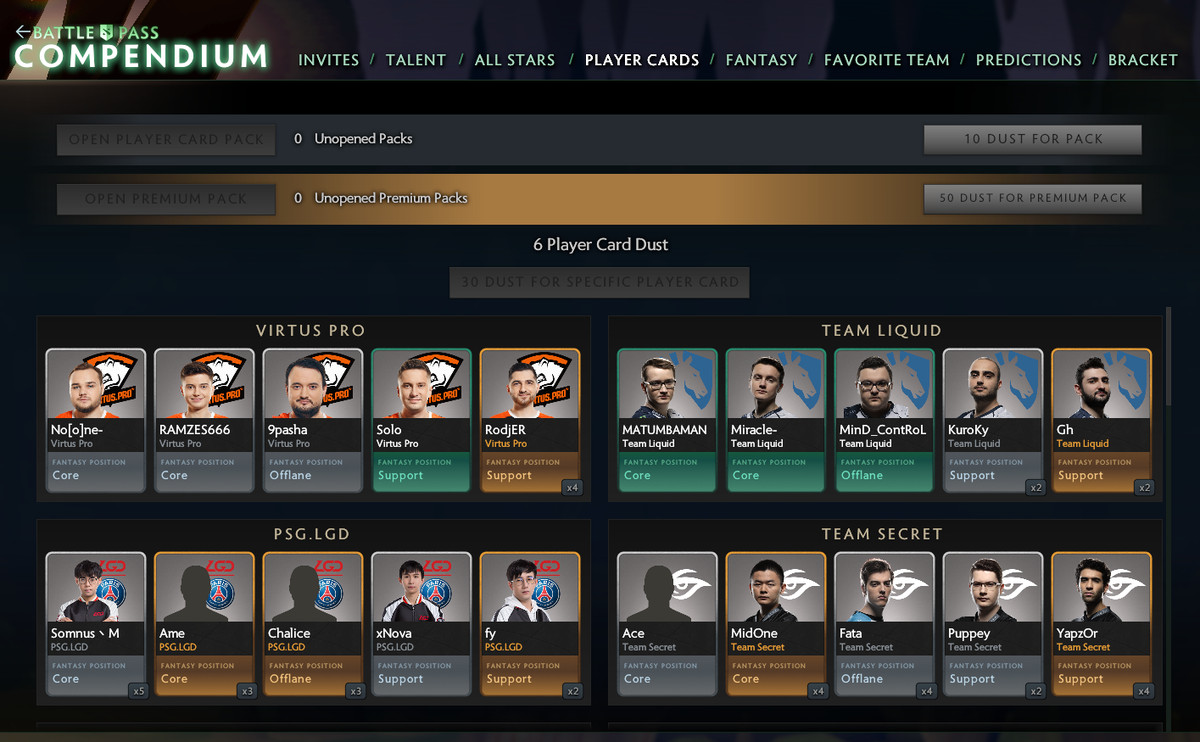 At the top, it’ll show your Player Packs. Open those up and acquire your cards!

With so many cards flowing into your inventory, you may be wondering what purposes they all serve. Green and gold and grey, oh my! It’s pretty easy, actually.

Each of your cards will track statistics such as gold earned, kills, deaths, towers taken, damage dished out and much more. You’ll earn points for your team depending on how well the players on the cards do.

And while all players are equal, some are more equal than others. That’s because Silver and Gold cards will track certain statistics and dish bonus points for them! So if you have a Silver card that tracks kills, you’ll get more points if your player gets a ton of kills.

It varies by card rarity and type. Here are the basics below:

And another cool perk: Collecting all five members of a “favorite team” will give you bonus effects for the team. Last year you needed all five to get the basic effects, but this year, it’s just nice if you really want to throw your weight behind a team in pub matches.

Now that you know what you’re dealing with, it’s time to make predictions. They reset after every day’s matches, so don’t feel pressured! (Especially if the team you were leaning on gets eliminated.)

And then you’ll see a screen that looks like this: 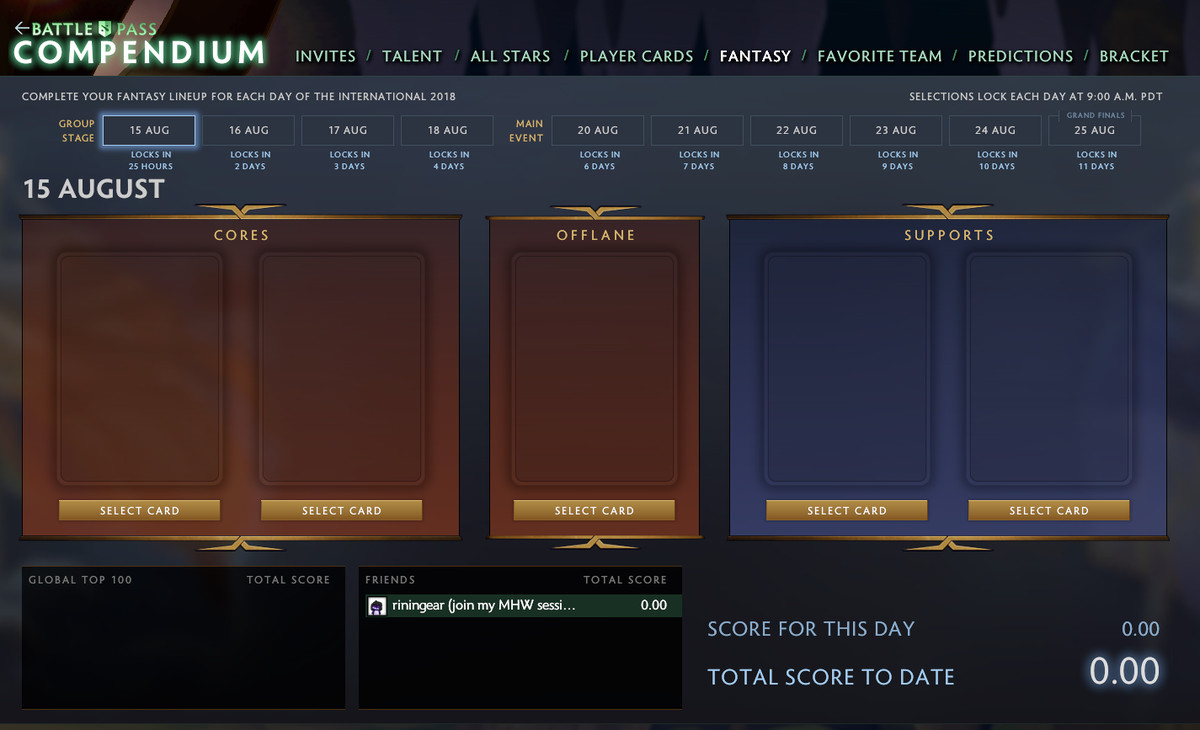 While we all know Dota 2 is a game of malleable roles, Valve has tried to do the favor of sorting players by role: Core, Offlane and Support. So you’ll only get players that are registered in each slot. At the very least, if you have no idea what you’re doing, it’ll make the leap a little easier.

When you’re ready, pick “Select Card” on the bottom of each slot and you’ll see this pop up: 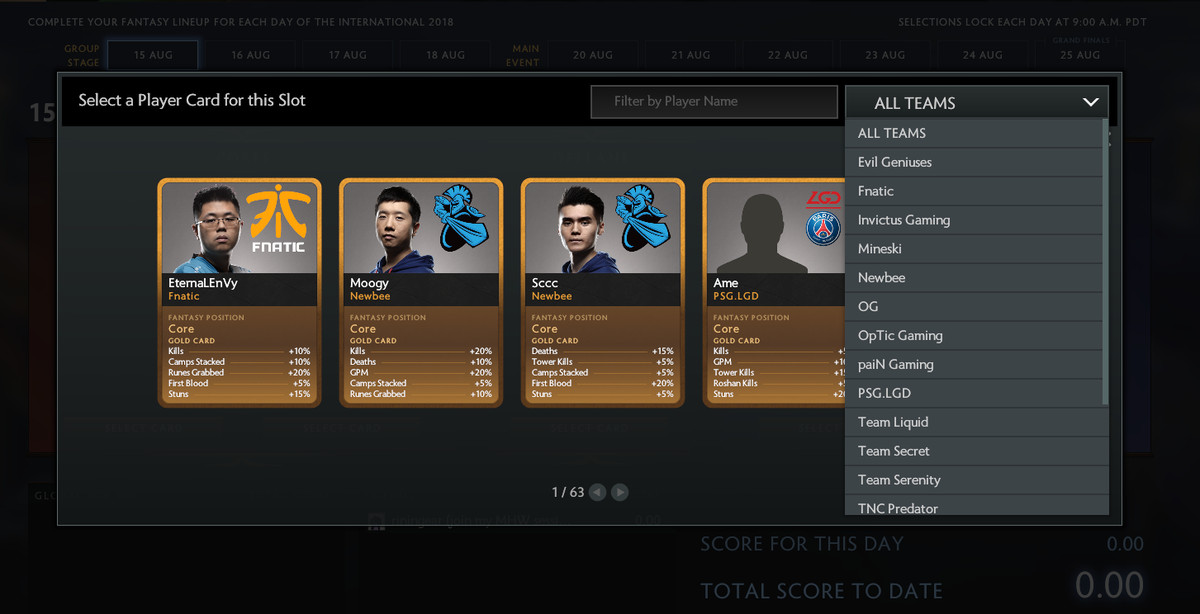 You can sort players by team, or just search for a player you want to see do well.

Remember that you can change your players every day after matches, and the lock is 9 AM PT (12 PM ET). So if you think a foreign player’s jetlag isn’t going away, or a NA player is too confident on their home ground, you can always change your mind.

With all this fancy player Gold and Silver and point mumbo-jumbo talk, you may be wondering — what are the stats, anyway?

The game will automatically keep track of these for you.

And what happens if you do well? The Battle Point winnings are as follows:

There’s no real buy-in either, unless you count your Battle Pass levels — so good luck, and have fun, as they say!