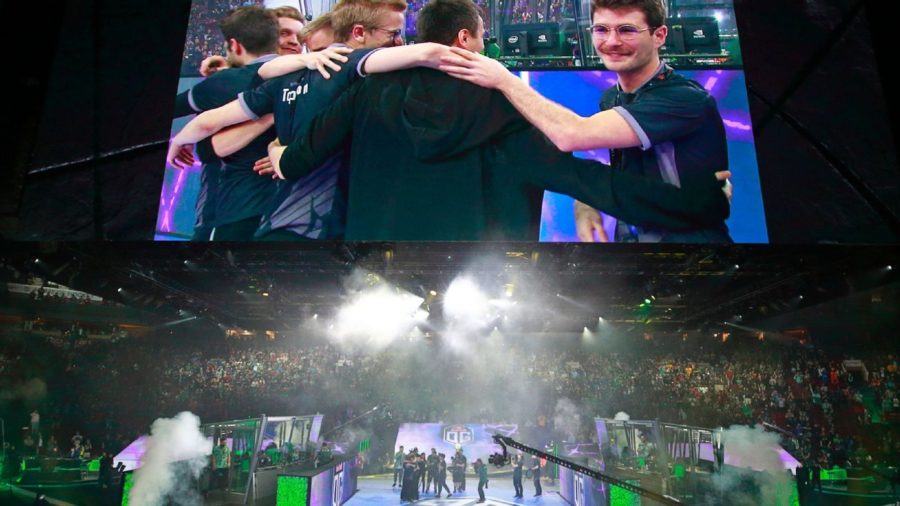 The International in Vancouver had a different vibe

VANCOUVER, British Columbia — Outside of Rogers Arena in Vancouver, a line wraps around the arena in the early morning of a hazy late summer morning in Canada. Fans across the world are waiting to get through the doors to watch the opening of the world’s richest video game tournament, Dota 2’s The International, in which 16 teams battle over the course of six days for the title of world champion and a life-changing grand prize. For this year’s tournament, bolstered by the community’s efforts in buying Valve’s Compendium for the event, the prize pool hit a new high, with the winner — Europe’s OG Esports — walking away with more than $11 million.

The International is like no other tournament in the world of esports, and that goes beyond the ludicrous amount of money given to the contestants. For instance, in a League of Legends championship or Overwatch final, you’d expect to stay, at most, six to seven hours over a weekend, but The International is a marathon and then some. The main event, beginning Monday in the arena, starts around 10 a.m. and can stretch late into the night, with some days reaching the 12-hour mark.

In prior years, The International has been held in Seattle, Washington, where the headquarters of Valve, the game’s creator, is stationed. Before renovations this year, Key Arena had become home for the tournament. There, the tournament captured a festival-like atmosphere, with a sprawling lawn outside the doors of Key Arena, where fans and passersby could enjoy themselves watching the games from a big-screen setup. If fans in the venue got restless in their seats or wanted to grab food, they could leave, explore the shops around the arena and hang out on the lawn before returning to their seats for the matches they wanted to see.

In Vancouver, while the crowd amassed might have surpassed the one in Seattle, the feeling was different. There was no lawn. Unless you wanted to shop at Costco across the street and lie on the city streets peering into the sun, there were not many outside activities to enjoy. It felt more like the standardized, esports big event that Riot Games and now Blizzard has mastered.

On the first day, the event could not have gone better. The fans, rooting for home-crowd favorites Evil Geniuses, were electric. The strong Chinese crowd in attendance backed the country’s best hope at recapturing the world championship, PSG.LGD, who went on to lose to OG in the grand final. It was everything Valve could have hoped for.

But come the next day, as the morning rolled along and the show was about to begin, the line that stretched around the venue on Day 1 couldn’t be found. Walking into Rogers Arena, the crowd was sparse, with the die-hards in attendance but a large majority not interested in the early-game matches. Although the crowd picked up as the day went along and the more popular teams began to take the stage, it felt like something was missing. Last year, you could roll in and out of the venue on a whim. This time, The International resembled an NA LCS split final or the Overwatch League Final in Brooklyn … except much, much longer.

On the final day, when PSG.LGD eliminated EG and lost to OG in an instant classic grand final, the crowd was electric. The Canadian esports fanbase, from its two NA LCS finals in 2016 and 2017 to its plethora of Dreamhack and ESL events, is one of the best in esports. In the final days of TI, there was no need for fans to lie on a field or do anything else but sit in the arena, cheering over every second of the matches happening in front of them.

The problem of The International is what makes it one of the best esports tournaments of the year: For six straight days, there are nonstop games. If you’re a watcher from home, it’s Christmas. You can watch at your own leisure, make sure to tune in when your favorite teams or players are playing and enjoy. As someone at Rogers Arena watching as the crowd shrunk, I started to reminisce about Seattle and the Key Arena, where TI become known to people throughout the esports scene. From managers to agents to players, they all agree The International is one of the events you can’t miss live.

Next year, the setting won’t be Seattle or Vancouver. It won’t even be in North America. China, the second home of Dota, which has won three world titles in the past, will be hosting the International 9 in Shanghai at the Mercedes-Benz Arena. Shanghai, like Vancouver, will have to live up to the previous iterations Key Arena has hosted. It will be interesting to see how one of the world’s marquee esports countries treats The International just two years after playing host to League’s World Championship tournament.

The International isn’t the League of Legends Championship, though, which spans more than a month. It isn’t a weekend event like Evolution, the biggest fighting game tournament in the world, held in Vegas over three days. This is The International, an event like no other, and it’ll be up to Shanghai to see if it can put its own spin on the marathon-and-a-half event in 2019.