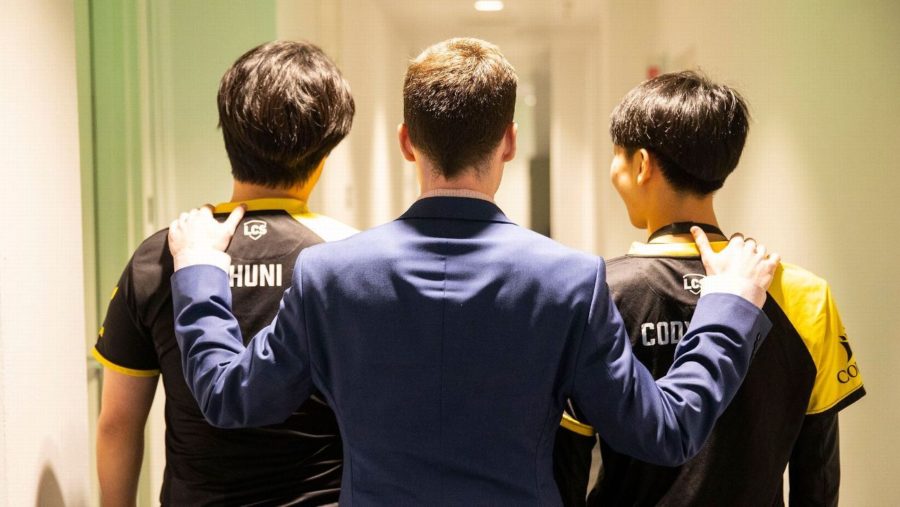 The first time I covered the League of Legends Championship Series, I almost didn’t make it to the arena.

It was early January 2016, a few weeks after I was hired by ESPN to cover esports full-time. Although I had been writing about competitive gaming for years, it was always from the comfort of my own home. I’d watch matches and dissect the storylines from my bedroom. If I wanted to interview a player for a story, it was through email or text message, backing out of opportunities if the only way to talk to them was over the phone.

I’ve had anxiety and clinical depression for as long as I can remember. In school, I sat in the back of the class, trying to stay away from the center of attention, even going as far as to ditch class or fake sickness if I knew I had to present something in front of people.

So when I was hired by ESPN and asked to cover the LCS live at its arena in Los Angeles, I demurred. I tried to make compromises based on that I could write from my bedroom and still bring the same high-level coverage they expected from me as a new hire. If I didn’t go the first week, I promised I’d go the second, fully knowing that I’d try to think of another way out of attending by the same time next week.

One reason I cover esports is that I understand where the players I’m covering come from. On the surface, professional gamers can be seen as kids living their dream by playing video games for a living, but it’s far more than that. Unlike traditional sports, where the players at the highest level have been brought up through a system as kids, each step carefully planned on their roadmap to the pros, competitive video game players often never thought this would be where they ended up in life.

The thought of traveling to an event, even in my home city of L.A., was debilitating. From the hundreds of people in attendance to the players I’d have to interview, it was overwhelming — the weight of countless people judging every recoil from my body or twist in my facial expression.

On the opening day of the LCS, I sat in the hotel room I had booked for the weekend, doubled over in front of a toilet. I had pushed back in hopes of getting out of my responsibility, but I was stuck. Writing for ESPN was always my dream job when I was that timid kid in a classroom, trying to hide from the rest of the world, and reporting on the ground from events was part of the responsibility I took upon myself when I agreed to that dream job.

A remodeled television studio, the LCS Arena is a labyrinth, hallways spiraling throughout with the main attraction being the actual venue where teams took the stage. What I remember from that day is the color of the floors as I was guided through the labyrinth alongside a colleague, shaking hands with staff, fellow press and members of teams before my eyes fell back on the floor. My first in-person interview, I stared past the player himself, trying to keep my brain focused on the wall behind him so I didn’t topple over from the feeling of my skin being on fire.

Since almost collapsing during my first day on the job, I’ve traveled the world covering esports for ESPN, including month-long stints in countries like South Korea, Germany, and China. And this past weekend, I walked into the LCS Arena to begin my fifth year covering the competition, the league recently announced by Nielsen to be the third-most-watched sports competition in North America for 18- to 34-years-olds, behind the NFL and NBA. While the colors of the walls and some of the personnel have changed, the feeling of walking up the steps to enter the building hasn’t.

For many esports pros, video games were their escape. They poured hours into their respective crafts to get away from the hardships of the world outside of their bedroom, be it a disruptive home life or difficulties at school. Often, a player will be whisked away from the comfort of their house and thrown to the wolves, with thousands watching live and millions from their own bedrooms. They have to talk to the media. They have to live away from home for the first time, sometimes sharing a house with teammates and coaching staff. If they falter in-game or don’t do as well as expected, there is no running away from the mob of hatred and criticism online, their careers forever connected to being in front of a computer and the never-ending strife that is social media.

When I talk to players at the LCS now, I can see it in some of their eyes. They look at the same floor I had my eyes glued to years prior, only looking up to answer a question or to say goodbye. They never expected to be here, only playing League of Legends as a hobby, and they ended up at the LCS. If they win and continue progressing, they’re seen and heralded as heroes, growing in social media followers and beginning a brand that can take them farther than just their pro career. If they fail, they’re replaceable, labeled as nothing special while the next teenager in line takes their place to see if they have what it takes.

I’ve seen hundreds of players come and go during my years at the LCS. At times, the arena can feel like a revolving door, teenagers plucked from their bedrooms or imported players from countries abroad failing to live up to unthinkable expectations, there one week and gone the next.

I remember one player in particular. He came over from another country to play in the LCS, and through the first few games wasn’t performing well. During my interview with him through a translator, he sounded as if he wanted to be anywhere else in the world. To try and lighten the mood, I threw in a softball question, asking what he was enjoying in his new life as a professional gamer in Los Angeles. His teammates? The food? The newfound fame?

That player didn’t return to LCS Arena for the next season.

These stories aren’t isolated to one player. Unlike traditional team sports, where athletes need to learn how to communicate and socialize with teammates as they make it up through the system, many players in esports make it into the big leagues having isolated themselves in front of a computer. Some are naturals, maturing under the pressure and finding a community in the esports world, even becoming leaders of teams and future champions. Others fall apart.

Despite the cheery window dressing, esports is a cutthroat industry. In the NBA, for example, a career can last up to two decades. This allows for teams and the league to take chances on rookies and players who don’t show promise straight away. Players in the NBA have lived fruitful careers banking on the words “potential” and “almost,” with each team they join thinking they can get the best out of the player. In esports, a player’s prime is a quarter of what it is in the NBA or other traditional sports, meaning that the turnover rate is much higher. I’ve seen players have their careers all but ended by one bad weekend, with someone new taking their place the next week.

The LCS is not the strongest League of Legends domestic competition in the world — far from it. Even with the amount of money funneled into it and the number of eyeballs on the product, the region has failed to send a team to the world championship final. I was there when the LCS had its crowning moment at the 2018 world championship in Gwangju, South Korea, where North American team Cloud9 made it all the way to the semifinals, only to lose big when getting there.

In some ways, LCS is kind of the island of misfit toys. It’s a mishmash of veterans, underachievers and import players from around the world trying to figure out how to go from an afterthought behind regions like China and Europe to a powerhouse in their own right. When a plan fails, one team shifts its roster and the shockwaves echo throughout the league, with everyone else following suit. After a disappointing 2019 world championship where no LCS team made the knockout round, all 10 franchises shook up their starting rosters, only a few even resembling how they looked at the year prior.

Sometimes, though not as often, I feel transported back to when I was that 13-year-old kid in middle school. I’m panicked over talking to someone, sweat down my forehead and my body feeling like it wants to separate from my skin. The anxiety and depression haven’t magically gone away, but I’ve become better at handling them and talking about it. And when I see a kid, a teenager or 20-something, panic-stricken with a frantic look across their face before an interview, I understand them.

It’s more than I understand them — I am them.

No matter where I go, be it Europe, Asia, South America, I always find myself back through that revolving door known as LCS Arena at the start of every new season. New players are ushered into the labyrinth for the first time, their teams hoping they’ll finally lead them out of the mediocrity that characterizes North American League of Legends. And I am watching it all from my perch above in the press seats, waiting to tell their stories.