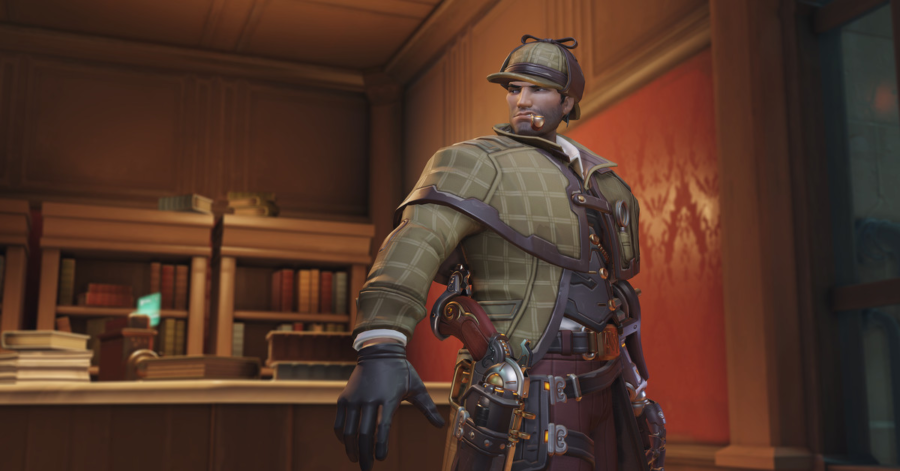 It’s September already — time flies when you’re having fun — and that means we’re almost at BlizzCon 2018, the biggest source for Overwatch news and announcements. Last year, we got the Moira announcement and animation, BlizzardWorld’s reveal, a bunch of new Blizzard franchise related skins, and the Honor and Glory cinematic. Presumably, we can also expect some good stuff at this year’s BlizzCon, and that’s why we’re already looking for clues and hints.

For instance, let’s take a looky-loo at this year’s key art.

Join us tomorrow at 3 PM PT for the BlizzCon All-Access Kickoff show! We’ll kick off the Virtual Ticket & learn more about what you can expect from BlizzCon this year – including the first in-game item for Overwatch! Watch at: https://t.co/hvt980ZJiG pic.twitter.com/QkPytrwORJ

Blizzard’s key art for conventions always has one character there to represent their iconic franchises. For instance, if we go clockwise, we can see Ava for Hearthstone, Tychus for StarCraft, the Raven Lord for Heroes of the Storm, Saurfang for Warcraft, Diablo for… well, Diablo, and for Overwatch we have Jesse McCree. Key art characters are always meant to be important to the franchise they represent, either a celebration of recent content or an indication of something new to come. The Raven Lord got a lot of fleshing out throughout 2018 in Heroes of the Storm and Saurfang has been a major part of Battle for Azeroth’s early story.

McCree, however, has had… nothing. Sure, everyone loves Matt Mercer, but Jesse McCree has mostly been up to his usual cowboy and hard drinking antics in the lore. The biggest story development he recently had was likely the very first Overwatch comic, Trainhopper, released back in 2016.

The last character to get key art was D.Va, for August’s Gamescom convention… which debuted a D.Va cinematic, Shooting Star.

So, is McCree getting a BlizzCon cinematic in November? That’s not guaranteed. Last year, Doomfist was the Overwatch representative at BlizzCon, and there was no Doomfist cinematic. That being said, Doomfist was still a new, shiny hero at that time. If Blizzard wanted to have a recent hero with no hints, they could have gone with the very new Wrecking Ball.

The All-Access Kickoff show begins at 3PM PST, and the BlizzCon virtual ticket will be going on sale today. A new legendary skin will be available for fans who purchase the ticket.