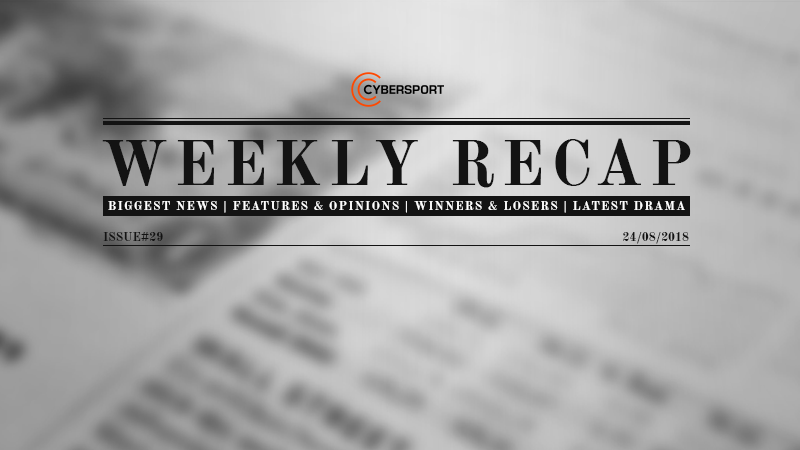 The International 2018 is just 2 days away from conclusion and the action has been heating up intensely. Meanwhile, a new map is headed to Overwatch, and Artifact has got a rough release time. It’s the Weekly Recap!

After a week of group stage and playoffs play at The International 2018, day 4 of the Main Event marked the day when we would find out our top 6. There were plenty of stories ready to form, with both Virtus.pro and Team Secret fighting to reach the highest result they’ve ever achieved at TI.

For one the day ended with success, for the other it all ended in tears..

Overwatch is heading to South Korea, with the news that a new Control map, Busan, is being added to the game.

Like the other Control maps in Overwatch’s roster — Nepal, Lijiang Tower, Ilios, and Oasis — Busan will be split into 3 sections, or as they put it, “distinct locales”. And distinct they certainly are — the “Sanctuary”, “Downtown”, and “MEKA Base” areas all look radically different and provide entirely separate backgrounds for the battlefield.

Overwatch gave us a good look at the gorgeous upcoming map with the release of a teaser video that shows off Busan’s 3 sections.

Earlier this week, it was announced that Não Tem Como added YeaH! Gaming‘s Alexandre “xand” Zizi to their core roster, totalling the member count to six. Rumours circulated around the removal of two players to accommodate for xand and an incoming player; however, no specific details were outlined by the organisation.

It has now been revealed by the organisation that Lincoln “fnx” Lau and Bruno “BIT” Lima will be taking a step back from active roles within the roster to make way for xand and, as per an announcement made today, João “horvy” Horvath. Additionally, the team will disassociate with the NTC brand, and while looking for a new organisation will be playing under the moniker “NoTag”.

Artifact beta to start in October this year

Artifact’s beta will launch in October 2018, Valve CEO Gabe Newell announced during the opening ceremony of The International 2018. TI8 ticket holders, as well as those attending PAX West later this month, will also get a free entry into the beta, Newell confirmed.

Screenshot from League of Legends

League of Legends’ Lead Producer, Joseph “New001” Tung, has spoken out in the latest ‘Riot Pls’ episode — titled ‘The Meta and Beyond’ — on several of the concerns that have been plaguing community discussion in recent weeks.

Among the topics of discussion is a broad overview of the meta, as well as closer looks at jungle and bot lane, alongside a few statements on game pacing and wider subjects like the rate of change in League, Experimental Game Modes, and Clash.