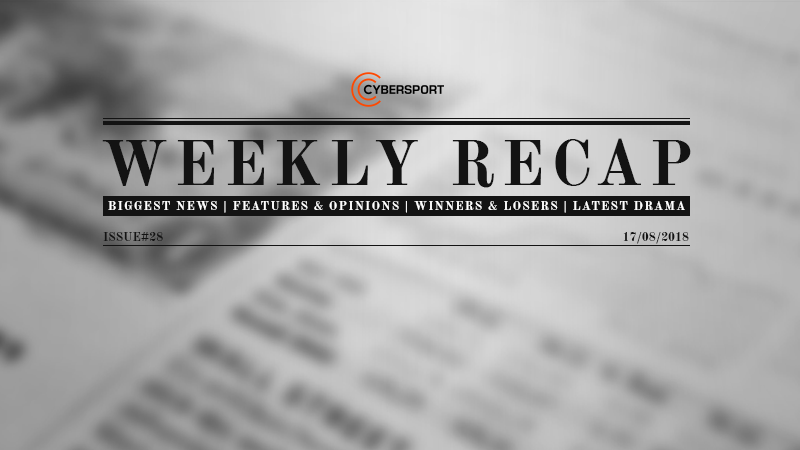 The International 2018 has been stealing the show this week, as all eyes turn to find out where esports’ biggest prize pool will be headed. Meanwhile, CS:GO upgrades its arsenal, and Riot starts to deal with a damning scandal. It’s the Weekly Recap!

As part of a new patch released on Aug. 15 by Valve, the MP5-SD has been added into Counter-Strike: Global Offensive. Submachine guns don’t typically have the biggest impact in the game when compared to assault rifles, but there’s still a time and place for them.

Upon its addition, Valve described the MP5 as “perhaps the most versatile and popular SMG in the world.”

Two days into TI8, and all teams have finally won a match. Group B had a lot of games but outside of VGJ.Storm, no one managed to use that to get ahead of the pack. The group remains highly competitive and teams have absolutely zero breathing room.

Evil Geniuses continues to be the biggest story of TI8’s group stage. After day one of groups, doubters of the team could have said that the teams they faced off with weren’t top notch. And they’d be right. However, after day 2 all arguments like that have now been invalidated, as EG faced off with the DPC’s 3rd ranked team — PSG.LGD — and absolutely demolished them.

Last week, the public perception of Riot Games as an idyllic workplace was rocked by the release of a Kotaku article that detailed a number of accusations of ingrained sexism in the company.

Although Riot claimed, in statements made in the Kotaku piece, that they’ve “taken action against many of the specific instances in the article,” and stated that they are “committed to digging in, addressing every issue, and fixing the underlying causes,” a tweet sent out on Saturday marked the first time they brought up the issue directly with the public.

The TI records: Most popular hero

Throughout the seven The International events, Rubick became the most popular hero. Since his release in June 2012, he has been picked 278 times with a win rate of 50 percent.

Teams didn’t make up their mind which role Rubick was best at during his debut at The International 2012. Some, like Natus Vincere, used him as a mid laner, others played him as a support and he turned out to be good in both positions. Rubick was one of the event’s most popular heroes with 80 matches and a win rate of 62 percent — the highest one among the top 10.

Raise your Deathfire Grasps! Riot Games have released its long-teased game mode, Nexus Blitz, on Patch 8.16. League of Legends’ latest stab at “fast and fun” game modes (after All Random All Mid and Dominion) is live and ready to welcome curious onlookers!

The game mode may still be in its alpha stages, but Riot has vowed to balance it to the best of their abilities. For example, Nasus’s Q — Siphoning Strike, which takes eons to charge on Summoners’ Rift, has already received adaptations to the game mode.