The first two days of the event will begin with the group stage to determine the six teams that will advance to the main show for the remaining three days, held at the Indoor Stadium Huamark, consisting of a capacity of 10,000 seats. Four teams around the globe will be directly invited to the $100,000 competition.

According to the website, the Thai organizer has revealed Renegades as the first invite. The remaining six slots will be determined through open qualifiers in Europe, North America, CIS, China, South-East Asia and Thailand.

The following dates for the online qualifiers are as follows:

The Thailand qualifier will lead to an offline national finals on October 20-21 at Pantip Esport Arena to determine its representative for the main event. Registrations will kick off on September 7. More information can be found on their website here. 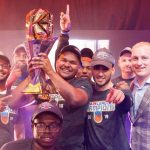