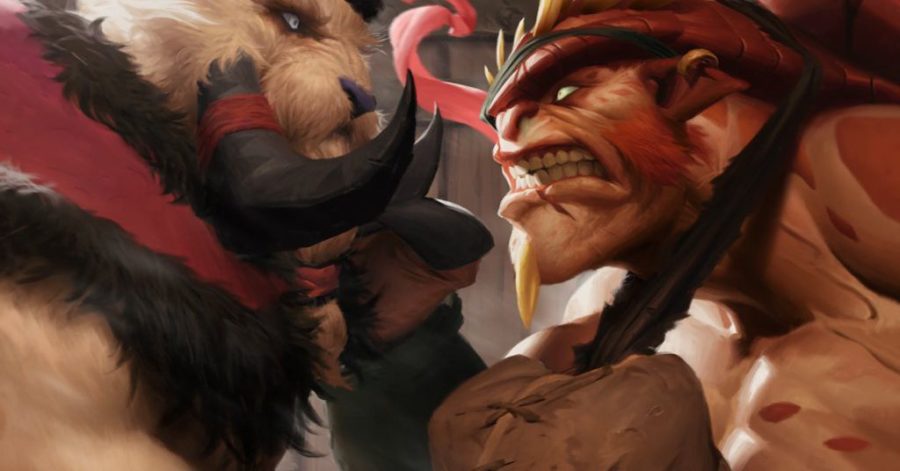 Valve’s new card game Artifact leans into Dota 2’s influence in more ways besides theme — and not for the better.

When Valve developer Jeep Barnett was asked in an interview about whether there would be moderation tools for Artifact players in-game, he said there wouldn’t be any, citing the one-on-one nature of the game as a preventative “psychological” factor:

“Psychologically, we find that people misbehave when there is somebody else to observe them misbehaving,” Barnett said. “When it’s a one-on-one game, what is my motivation for saying something awful? But when you’re in a game with a bunch of other people and you say something, a bunch of other people laugh at you, so something happened. We tend to see people behave very differently in one-on-one situations.”

This is a copout and a disappointment. It also shows that, as is its trend, Valve ignores its own platform’s social flaws and completely misses the point player concerns.

The point of moderation isn’t to “minimize” chances of problems — it’s to squash these problems altogether so players feel safe approaching the game. A no-moderation setting creates opportunities in which toxic players can remain confident that their damage is done before they get caught, if they get caught at all.

But while most games’ in-game tools typically do their job, in Dota 2, harassment often continues outside of the game through private messages. Dota 2 has one of the most open systems of direct, out-of-game contact of any PC game through the Steam platform, as players can find each other’s profiles through the Dota 2 profile page if they keep it public. (Most players do keep it open to allow sites such as Dotabuff to read their statistics.)

So, especially in one-on-one environments, these players often want to irritate their targets and, ultimately, intimidate them out of the space altogether, and that’s frequently how it works out with newcomers in Dota 2. In other words, the Steam platform creates the opposite scenario of what Barnett describes: the one-one-one intimidation persists outside of group scrutiny. This isn’t a theory or fear of what might transpire — this is the situation found on Valve-published games on Valve’s own platform right now.

Worse, once a flamer opens up a profile, the focus of the harassment often moves from perceived gameplay deficiency to any form of marginalized identity revealed by the target.

Targeted harassment is often by country or first language in Dota 2, but when possible, it’s frequently because the player openly admits to being a woman or queer. Then, whether in-game or via the Steam social features, the already-obnoxious messages only get worse.

Valve is assuming equal footing for everyone on the issue of harassment when, as more research reveals each year, women, for instance, get drastically more intense gendered harassment. And it’s often far worse in private, again in contradiction to what Barnett explained in his interview. Toxic players aren’t always putting on a show for other players; the goal is often just to make sure someone else doesn’t feel welcome in the game at all, and make themselves feel superior.

Without proper preventative moderation tools, we’re expected to squat mosquitoes after they’ve bitten us — or just never go out outside at all.

Barnett also says he hopes the community creates its own initiatives for diversity in the same interview, citing Magic: The Gathering’s social power. But again, he shirks Valve’s responsibility in creating a welcoming space in its own game.

Any form of diversity in Magic: The Gathering’s community stems from over twenty years of history and proven gameplay, followed by Wizards of the Coast’s recent initiatives to foster a better player base. It’s certainly had its issues, but in the wake of bad situations, the organization has at least made an effort to learn.

On the other hand, “no moderation” and “no initiatives” are surefire ways to kill diversity before it has a chance to emerge. In fact, I’d argue Dota 2 is one of the most infamously least diverse communities out there, at least when looking through a Western lens. In spite of its fourteen-year history and exciting gameplay, rude players are often the point at which newcomers, already trying to overcome a steep learning curve, decide to abandon their training. In all forms of gaming, a lack of visible diversity often just perpetuates more lack of diversity.

By now, I’d think Valve would have better moderation tools, or any at all. Or, I’d hope they’d at least listen to Reddit’s frequent complaints about the issue. Prevention and accountability in a game is a great way to retain players and assure new ones that they are welcome. Moderation is a step in the right direction, as Dota 2 has been losing players for a few years now, and anything widening their potential player pool helps. And in Artifact’s direct competitor, Hearthstone, it worked.

But if Artifact is, again, anything like Dota 2 or any of Valve’s other games, we just have to hope that there’s a functioning mute button, blocking features and enough report cards to withstand the storm.