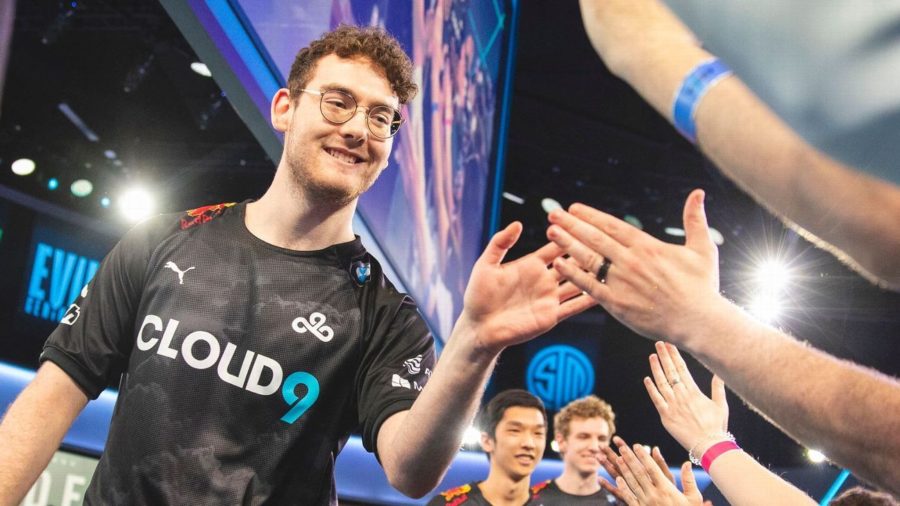 That was the one word to describe Jack Etienne as he sat down to write an email late last year after the League of Legends World Championship. Three days earlier, the 47-year-old Cloud9 CEO flew more than 14 hours to return home to Los Angeles after his team had failed to make it out of the group stages of worlds. How could Cloud9, constructed around four players who had led the team to the worlds semifinals the previous year, be out so early this year? It was their earliest exit since 2015.

Things needed to change, Etienne thought as he wrote. The message he sent was just the first step.

“I have these skilled North American players available,” it read. “Would you be interested?”

Svenskeren wanted rapid changes in the Cloud9 roster, and Etienne found himself stuck between Svenskeren and Robert “Blaber” Huang, his young, rising star jungler. Neither wanted to continue sharing that spot, and Barton unequivocally wanted Svenskeren.

“All four pieces have value,” Barton told ESPN. “They’re pieces players want to play with, so when Jack reached out, I thought it was a fantastic deal we could get done.”

In less than two weeks, Cloud9 and Evil Geniuses exchanged a document that would see the latter pay a reported $2 million in return for Zeyzal, Deftly, Kumo and Svenskeren. That deal couldn’t be signed until Nov. 18, the first day of free agency, but all parties were full-steam ahead.

With Zeyzal’s departure, what Etienne needed more than anything was a new support. He checked on his former player Andy “Smoothie” Ta and then-Counter Logic Gaming support Vincent “Biofrost” Wang. Neither were available. And that left Etienne with one target: Dignitas support Philippe “Vulcan” Laflamme.

Vulcan was a rising star in North American League of Legends. Promoted for the 2019 season on Clutch Gaming, Vulcan quickly established himself as one of the best rookies in the league. He followed it up with a breakout world championship performance in Berlin in October, standing out as arguably the region’s best player in a time of lackluster performances.

Etienne had one problem. Vulcan remained under contract with Dignitas, and to get him, Etienne would have to buy him out.

“Is he available?” Etienne asked Dignitas CEO Michael Prindiville in a phone call following their return from Berlin.

“No,” Prindiville responded. The team’s fortunes had changed dramatically when Dignitas management took over midseason. Prindiville had helped turn around Clutch from a ninth-place team in the spring to a world championship-bound squad. Vulcan was as integral to that transition as any player.

But anyone who knows Etienne — the eight-year-tenured esports executive who has built the most valuable and one of the most competitively successful esports teams in the business — knows that money is no object. Since he came into the League of Legends Championship Series in summer 2013, Etienne became a mentor to younger executives and the league’s unofficial puppet master. No one knew how to negotiate quite like Jack.

“It would’ve been unconscionable for me to walk away from that offer,” Prindiville said.

The two saw eye-to-eye about a week before the opening of free agency on Nov. 18, but that week was fraught with chaos. Evil Geniuses needed the four-player trade to go through, but as the back-and-forth between Cloud9 and Dignitas continued, Evil Geniuses weren’t the only team on hold.

In the week leading up to free agency, the Cloud9/Dignitas deal became more and more complex. At first, they couldn’t agree on price. Then Dignitas wanted a player, which ended up being Johnson “Johnsun” Nguyen. Still, Dignitas wanted more, and as conversations expanded to include both Svenskeren and Zeyzal, the deal that Evil Geniuses had with Cloud9 was potentially in jeopardy.

As team executives prepared to attend the LCS Scouting Grounds on Nov. 11, Evil Geniuses were notified their deal with Cloud9 was on hold.

“What does that mean?” Barton asked Etienne.

“It felt like our thing was contingent on the [Dignitas] thing,” Evil Geniuses LCS director Greg Kim told ESPN. “And it wasn’t clear what had changed, but something had changed. Every indication was that it was kind of being forced on Jack from Dignitas. We’re pretty confident he wasn’t doing it to f— with us.”

Kim wasn’t mad at Etienne. He understood the position Etienne was in — if Cloud9 moved Zeyzal before having an appropriate replacement, that would leave the team at a disadvantage.

“It’s hard to fault [Etienne] for that,” Kim said. “He’s just looking out for the best interest of his team. I think we did have a sense that there may be a dollar point that he needed in our negotiations to sort of cover the cost of his other offseason stuff to some regard or to some extent. But to me, it was always more like, the guy needs a top [lineup].

“My frustration was that verbal deals were being broken. S— happens in esports. You can never say never. But we tried to hold our verbals to the best extent we can. I don’t know what was going on with the Vulcan deal, but I think it was a little frustrating for us. Because handshakes had been made, and to hear that handshakes were being reneged on or revisited, that was kind of frustrating.”

As things progressed, Svenskeren, Zeyzal, Deftly and Kumo began onboarding at Evil Geniuses before Nov. 18. The players were introduced to staff, added to the company Discord server and had announcement photo and video shoots scheduled.

“Although I had kind of negotiated verbals for a lot of my players to move on to other teams, until I had my Vulcan deal done, none of them really mattered,” Etienne said. “I would not sign a single deal until I knew my Vulcan deal, which was super important to Cloud9 that it was done.”

Etienne was set on Vulcan, no matter what. He had his other three players — Blaber, Eric “Licorice” Ritchie and Yasin “Nisqy” Dinçer — provide feedback on their few North American-resident support options. All of them were positive on Vulcan, and Jesper “Zven” Svenningsen, whom Cloud9 was courting for AD carry, liked the prospect of pairing with Vulcan, too.

“I had to be ready to, whatever the deal was, to make sure that Vulcan was coming out here,” Etienne said. “Because at the end of the day, I had already made a decision that Vulcan was my guy and I’m going to figure out a way to make that happen.”

If it weren’t for Vulcan’s acquisition, C9 might not have traded Tristan “Zeyzal” Stidam, right, and Dennis “Svenskeren” Johnsen, second from right. Photo by Colin Young-Wolff/Riot Games

On the night of Nov. 18, at 7 p.m. ET, global League of Legends free agency opened. Atop nearly every team’s whiteboard in North America sat Jake “Xmithie” Puchero, the most valuable North American-resident jungler in the league. On an expiring contract with Liquid, where would he go? Which teams would be able to court him?

Behind the scenes, frustrations grew across the league as it pertained to Vulcan, Cloud9 and Dignitas. By the morning of Nov. 18, it seemed like the agreement was understood: Johnsun and $1.5 million for Vulcan.

If it didn’t work out, it would’ve altered the opening night of free agency. European teams began to make moves rapidly throughout the evening, but North America sat mostly dormant, other than a few teams executing on agreements that were made beforehand.

“‘Until you do it, nothing’s happening,'” Etienne said that executive told him.

“‘Can you kind of move this thing along, dude? You’re screwing up our trade day.'”

It took more than two hours for the deal to be signed, but finally, the deal was done.

On Nov. 18, Vulcan became the highest single-player buyout in Western esports history. Etienne would not only agree to send $1.5 million to Dignitas, but he would also buy out Johnsun from Team SoloMid for $250,000 to include in the deal.

Vulcan’s worth became essentially $1.75 million and Etienne ultimately walked away profitable this offseason — Evil Geniuses did pay him $2 million, and he traded another contract for Greyson “Goldenglue” Gilmer to Golden Guardians. Whether Vulcan is worth it remains to be seen, but Cloud9 is happy with their 4-0 start.

Vulcan’s buyout resulted in cries of inflation around the esports industry in November. As esports has continued to rise, led by League of Legends, consumers and business executives alike have grown concerned about a bubble. How can a single player cost $1.75 million? “I’m getting nauseous reading these headlines,” said G2 Esports CEO Carlos Rodríguez Santiago in a tweet about Vulcan.

In May, Evil Geniuses were acquired by PEAK6 Investments, who installed Nicole LaPointe Jameson as the team’s new top executive. Evil Geniuses were once the most popular esports team in North America, but through a series of events, including being acquired by Twitch and then released for its players and team management to run, fell off the list of relevant entities in esports as a whole.

In October, Evil Geniuses paid $33 million for the LCS slot previously owned by Echo Fox. The team got no assets. No player contracts. No coaching staff or management. No branding. Nothing.

“We had zero assets. No one necessarily wants to be the first guy coming over here and such,” Barton said.

Meanwhile, Dignitas, also new to the league, had valuable players and one massive free agent to tend to: Heo “Huni” Seung-hoon, whose contract expired in November and who was expecting a big pay day. Prindiville, who was hired in May 2018, had been tasked with making the organization, one of the oldest in League of Legends history, relevant again.

He has spent big to do so — more than $20 million for Dignitas’ parent, Philadelphia 76ers owners Harris Blitzer Sports & Entertainment, to gain control of the Clutch Gaming entity. Dignitas needed to make financial sense of spending what ultimately became a $1.1 million first-year salary for Huni. With a large payroll, moving others made sense.

Dignitas not only dished out Vulcan. They moved AD carry Cody “Cody Sun” Sun, too, and did not pick up the option for mid laner Tanner “Damonte” Damonte. Huni-tas, as Huni appropriately called it in a recent interview, became the roster objective.

“Huni was always the single guy I knew I wanted to build my org, my team in LCS around going forward,” Prindiville told ESPN.

“I had zero intention of trading Vulcan, going into the offseason,” Prindiville continued. “He’s a fantastic player with a bright future. He’s a player who was developed within the academy system at Clutch Gaming and was able to accelerate his career into LCS and the success he had at the world championships … It’s a dream for any NA player. But the reality is that there comes a time where all negotiations, frankly, the money was too big to turn down.”