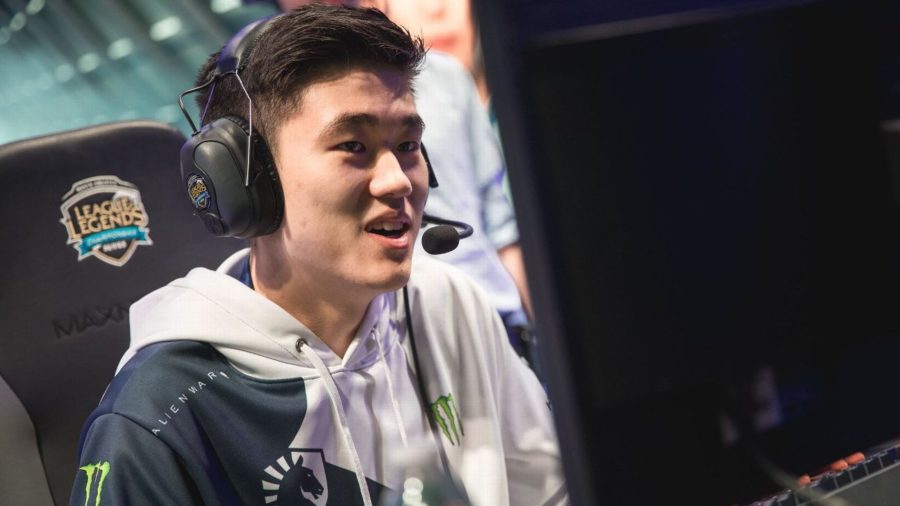 The League of Legends Championship Series asset day is a bit like a first day back at school. Players mill around the LCS Studios dressed in their new uniforms, shuttled into various rooms for photos and interviews with the Riot Games team as well as members of the media.

If all had gone according to plan for Team Liquid, perhaps veteran mid laner Eugene “Pobelter” Park would have been dressed in a suit or business-casual outfit, preparing to take pictures as a member of the team’s coaching staff. Perhaps he would have been dressed down, hanging out with other team analysts and staff members, chatting about game changes and draft priority in the Riot smoothie bar. Perhaps he wouldn’t have been there at all.

Yet, Pobelter was there Wednesday in Santa Monica, California, dressed in a Team Liquid uniform as a player. Due to visa issues with Team Liquid’s starting jungler, Mads “Broxah” Brock-Pedersen, and Academy jungler Shern “Shernfire” Cherng Tai, Pobelter role-swapped to the jungle position for team practices and scrims.

“I really didn’t want to insert myself as a player because I didn’t want to make it awkward or anything,” Pobelter said. “I came on as a coach, and that was my intention, but I was asked by the team to step in, so that’s what I did.”

He reiterated that his jungling days are temporary and dependent on Broxah and Shernfire’s visa issues being resolved.

“Basically I’m just doing whatever the team needs of me, and right now they need me to go sub in as jungle, so that’s what I’ve been doing,” Pobelter said. “It’s just a temporary thing, of course, until Broxah gets to the United States, or maybe even until Shernfire gets here, but for now they’re both being held up on their visas or the process is still ongoing, so I’m just doing my best.”

One of the more startling announcements of the LCS offseason was a Twitlonger posted by Pobelter called “Great Wall of Text,” announcing the 23-year-old had been unable to find a roster spot in the LCS. Until this split, Pobelter had been an LCS starting mid laner since spring 2014. After this announcement and the ensuing aftermath, he reached out to Team Liquid co-owner Steve Arhancet looking for friendly advice.

Arhancet offered him a coaching position.

“I wasn’t really expecting it,” Pobelter said. “I called Steve because I was looking for advice and was like, ‘I don’t know what the f— I should do, man.’ And he invited me on as a coach because he thought it would be helpful to the players, and I thought I could be a really good fit too. It’s been great so far being back on Team Liquid, working with my former teammates and just being back at the office with the staff that works there.”

Due to Broxah and Shernfire’s visa issues — Broxah is in Europe and Shernfire is in Australia — Pobelter has done very little coaching and a lot of preparation in case he has to start as Team Liquid’s jungler.

“I’ve been in the game itself,” Pobelter said. “It’s definitely easier in some ways to speak about the game and give players feedback if you yourself are not in the game. You have a holistic view of it. I think your viewpoint on the game is always going to be biased if you play in it. I haven’t been able to do much coaching yet because I’ve been playing jungle, and there’s so much stuff that I need to learn, too, so I’ve been busy and mainly focused on that.”

Despite the fact that Pobelter’s jungling days are likely temporary, it’s worth noting that other veteran players have successfully made the transition from laner to jungler later in their careers. Although Pobelter won’t be compared to the likes of Kang “Ambition” Chan-yong or Go “Score” Dong-bin anytime soon, the mid laner can prove he’s still got what it takes to compete in the LCS through his stand-in jungle play.

That would be a correction of the preconceived notions about his talent that Pobelter believed led to his unplanned break from pro play.

“I think there’s a misconception that veterans are a known quantity, and rookies have boundless potential,” he wrote in his Twitlonger post. “As long as you are willing to put the time in and work hard as well as stay open minded, there is no limit to growth in this game.”

For now, he’s still trying to grasp jungling basics. He credited the strengths of Team Liquid’s laners for helping make the transition period much easier than expected.

“It’s really different, of course, laning and jungling. Thinking about pathing is really weird to me. Right now the jungle meta is really dependent on your laners and where you can set up a play, so it feels really coordination-based with my laners, and we’re all really good at coordinating and understanding what the next play is so that part is going smoothly,” Pobelter said. “The weirdest thing is that I’m not in a lane. I’m not facing off against someone. I’m walking over a lot of wards because I’m not looking at myself. I’m just cycling through all three lanes, so I need to look out for myself more.”

If he does make an LCS start as Team Liquid’s jungler, Pobelter said that his strength will come from his wealth of experience as a laner.

“When I was a laner it would always be like, ‘Well, I wish my jungler knew this about my lane and what I want,’ so I think that’s hopefully something that’s been helpful to our team: I really understand the laning perspective and what they need out of a jungler,” Pobelter said. “I can identify instantly if they need crashing the [minion] wave or need cover. Junglers don’t always know that. They need their laners to tell them, ‘Oh, I need help pushing this out all the way,’ or, ‘I need you at this time.’ For me, I think I can tell a bit easily, especially around mid because I played it for so long. That’s my one strong point as a jungler.”