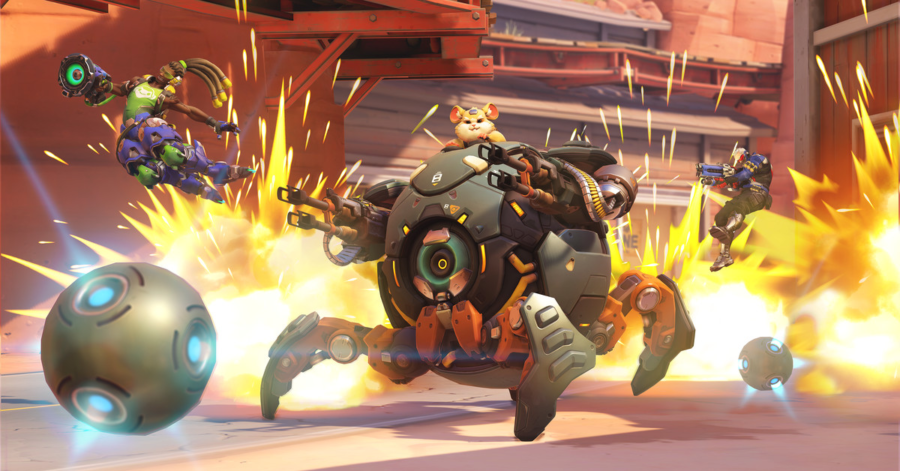 Wrecking Ball is teaching me to love taking risks in Overwatch

Wrecking Ball is different than the other Overwatch tanks. I mean, besides the fact that he’s a genetically modified hamster from the moon. In some ways, Wrecking Ball is one of the most difficult tanks in the game. His hook and swinging mechanics can be incredibly effective, but it’s also dramatically more difficult and takes more thought than just pressing shift and charging into a fight as Reinhardt. I picked up Wrecking Ball so that I could understand him; I planned on figuring out what he was capable of and then promptly moving back to my usual roster of mains.

Instead, he hooked me. Wrecking Ball is an amazing addition to the Overwatch roster, and he’s the hero that made me realize just how powerful and potent a tank can be in the right hands. He may be small, but Wrecking Ball single-handedly granted me big dreams of perhaps being a tank main.

The important thing to understand about Wrecking Ball, especially if you’re just picking him up, is that you always have to be doing something. If you’re not, you’re dead in the water, and as we all know, hamsters aren’t great in the water. Characters like Reinhardt and D.Va need thought and effort to play at the highest levels, but down here in bronze and silver, you’ll see tanks carefully hanging in the back lines.

You can’t do that with Wrecking Ball. You just can’t. His weapons do no damage from distance, his shield is only worth using when you’re in the thick of things, and he’s actually very easy to kill if he’s not actively swinging into fights and getting massive shields. The first few games I played Wrecking Ball, I would either hang back and die or wade into fights and die. I thought, maybe this hero wasn’t for me.

Then I realized the strength of his two forms. One is completely mobile but defenseless, and the other is one of the beefiest tanks in the game. Once you learn how to swing in, drop down and knock everyone up, then shield and start firing, Wrecking Ball clicks.

The thing with Wrecking Ball isn’t just that he’s brutally inefficient and un-fun if played in a sub-optimal, cowardly manner… it’s that once you figure out the hook of how to play him, you won’t be able to stop. The grappling hook, power slam, and minefield are all incredibly fun abilities that pay off in extremely gratifying ways.

Wrecking Ball’s hero design makes him feel more like he comes from a MOBA than a shooter. In games like League of Legends or Heroes of the Storm, a tank usually has some way to initiate. Tanks that rely on subtle power play and innate stats are usually unpopular and fall to the wayside; tanks with strong, powerful abilities that act as a blatant cue for their team to follow up do much better. Malphite’s Unstoppable Force, where he slams forward and knocks everyone around him up, feels much better than a character just lifting a shield.

Wrecking Ball’s signature move isn’t tied to an ultimate, and therefore he’s constantly pulling off big, powerful moves that are a blast to do. Do they always work? Of course not … especially in bronze. But each time I go in aggressively, my brain gets a little shot of adrenaline. It’s trained me to play other tanks in a similar manner. I don’t hang back among the DPS now, I’m either in the thick of things on the front lines or I’m actively stopping their dive heroes from taking out my healers.

Wrecking Ball’s kit trained me to play tank and shed my careful ways better than any guide or tutorial could, and I’m glad that I gave the little guy a chance. As long as Overwatch keeps coming out with new heroes, I hope they keep bringing out characters that make their role fun and fresh. Wrecking Ball is more than just my favorite tank at the moment; he’s the character who taught me how to tank, even on Zarya or D.Va. It’s a tough accomplishment for a designer to pull off, but it’s why I love the ability-focused, wild world of Overwatch, where even a space hamster in a mech with a grappling hook can thrive.