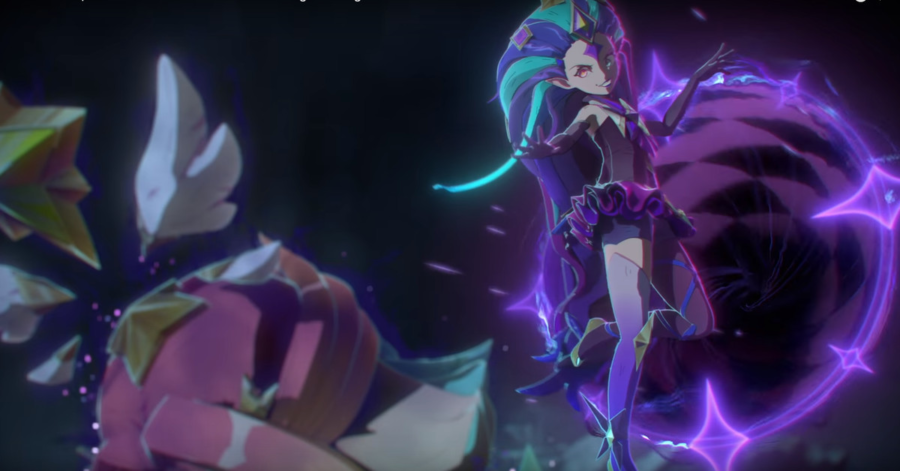 The latest batch of Star Guardians skins are for Neeko, Xayah, Rakan, and Zoe, and Riot has put together and animated cinematic showing off the story behind all four of them.

In this cinematic, she turns Xayah and Rakan against their fellow Star Guardian Neeko. The three forces fight each other, though it seems that Neeko is trying to avoid injuring the corrupted guardians. When it seems that Xayah and Rakan have gotten a little too weak, Zoe shows up to try to finish Neeko off. Neeko runs to escape but seems to be trapped in an endless loop of stairs and rooms thanks to Zoe’s portals. But before Zoe can corrupt Neeko too, Ahri bursts through the wall of the tower to save the day.

In her hand she has several brightly colored stones. While we don’t get many specifics on the larger Star Guardian story here, we did get a hint from Riot a few weeks ago. The official League of Legends Twitter account teased this animated cinematic by showing off the shot of Ahri with the stones in her hand and the words, “I will find you before her darkness burns you all away.” Based on this, and the cinematic itself, it seems that Zoe is attempting to corrupt all of the active Star Guardians, while Ahri chases behind her trying to save them.

The trailer itself is beautifully animated and seems to mix in several varieties of hand-drawn and 3D animation. Sadly, for now these small bits and pieces are all we’re going to get for Star Guardian lore. With this year’s skins already here, we’ll probably have to wait until next year for our next update on the guardians.